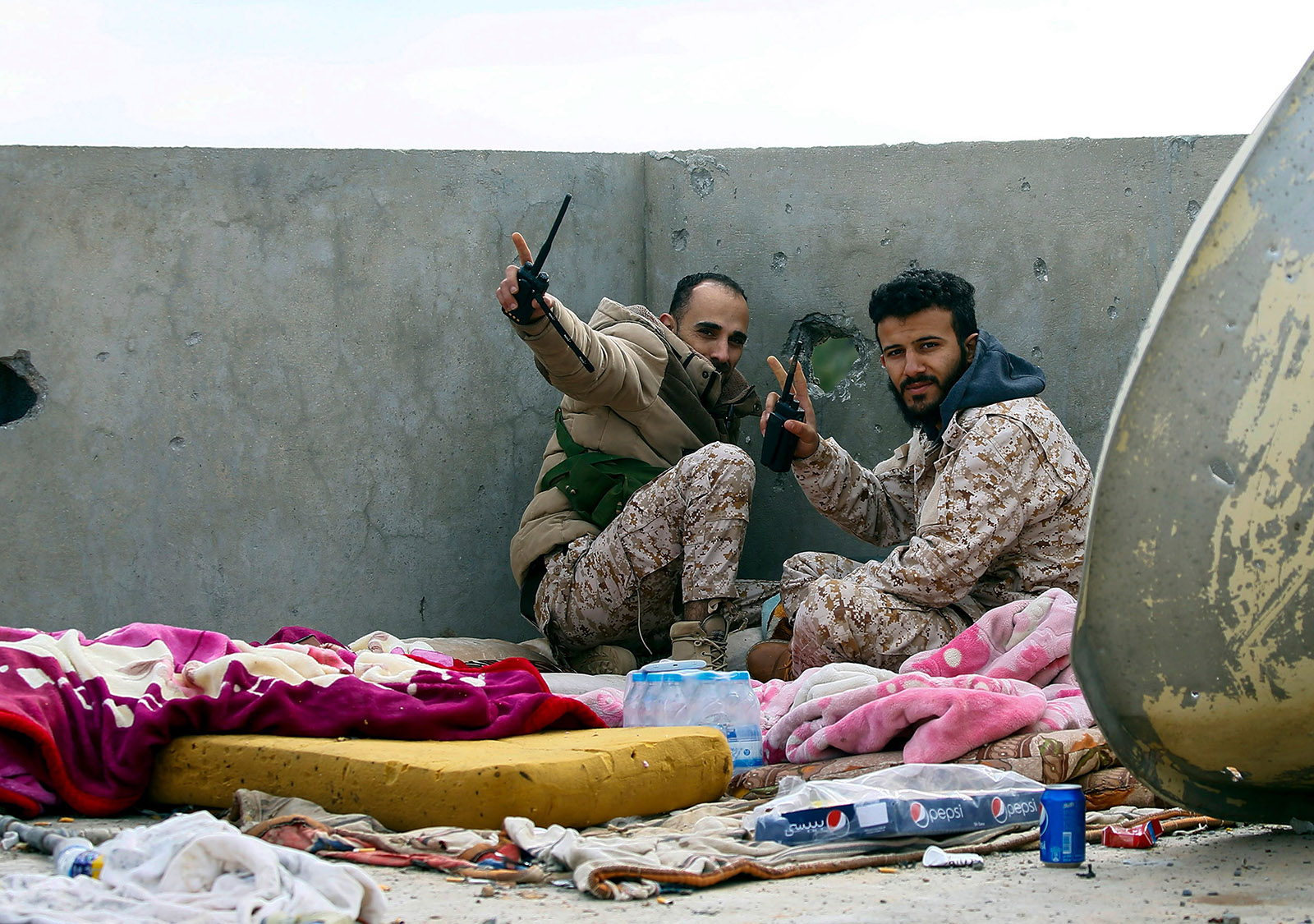 Fighters loyal to the GNA gesture as they keep a look out on the roof of a building in an area south of Tripoli on January 12, 2020. (Photo by Mahmud TURKIA / AFP) (Photo by MAHMUD TURKIA/AFP via Getty Images)

The Libyan National Army (LNA) and the Government of National Accord (GNA) are about to reach an agreement to demilitarize the city of Sirte, Asharq Al-Awsat reported on September 25.

Sirte, one of Libya’s key oil ports, has been the focus of the ongoing talks between the country’s warring parties for the last few months.

Sources familiar with the ongoing talks told Asharq Al-Awsat that there is an initial understanding to demilitarize Sirte in order to turn it into a headquarters for a new “national authority” that will succeed the UN-recognized GNA.

“There is an initial understanding to turn Sirte into a demilitarized green zone, withdraw all conflicting parties from its surroundings and to declare a permanent ceasefire between the GNA and the LNA,” one of the sources told the London-based newspaper.

The sources also claimed that Russia and Turkey had reached a secret agreement to withdraw all foreign fighters supporting the LNA and the GNA from Libya.

Delegations from the LNA-backed House of Representatives, HoR, and the GNA are set to start a new round of direct talks in Morocco in two days. The last round saw some progress, according to several sources.

Today Libya appears to be closer than ever to a political settlement between the LNA and the GNA. Pressure from Russia, Turkey as well as the U.S. is forcing both side to compromise.

They all desperately need money poor sods (war is expensive sport) and oil is only thing they have to sell.

I knew a guy who worked in Libya years ago,he said it was great and he felt safe on the streets,now its a nightmare.

After US and “allays” brought them “democracy” through bombings, Al Qaeda and ISIS. The problem is that those warmongering fuckers that destroy Arab countries, want to destroy Western world and rest of the planet also now….

Many people from E.Europe worked there. They got 1000 dollars and more for month, which is twice more than at home. Not so luxurious as UAE, but far much better than all neighbors and some EU states. Social care was at highest level. Money for newborn kids, for buying home, for postgraduate study in foreign universities.

The Russan admin, along with every other, know that it’s just a matter of time before Libyans begin to decide their own future once more. The country is practically overrun by the LNA. It’s only nato and Turkey standing in the way because of oil contracts.

It’s obvious that the Libyan people want this too otherwise nato and Turkey wouldn’t be stepping in. Since when did either of them put Libyan’s first.

But we were promised a massive counter attack from Egypt. I though Russia would help Haftar push out Turkey ? What about all those incompetent Turkish fighters flown in, It seems they werent that bad after all ? What happened LNA ? I guess reality is a thing after all. Remember the GNA is officaly backed by the UNSC which contains Russia and the ZioAmericans, the LNA never stood a chance. Or did Turkey cause all of this to happen ?

Russia never officially backed Haftar to begin with, despite all the lies and exaggerations. Libya was never Russia’s fight, and in a pragmatic sense, Haftar is too much of a “loose cannon” for Russia to handle and maintain. Other than mediating, it’s better for Russia to stay out of Libya.

” Haftar is too much of a “loose cannon” for Russia to handle and maintain. Other than mediating, it’s better for Russia to stay out of Libya. ”

He’s a lose cannon now, but go back and read the comments about him on this site several months, and even weeks ago. He was supposed to be the savior of Libya according to many here. Now, that hes defeated everyone is suddenly against him. Very convenient.

Also, Russia got involved in Syria when they backed the GNA at the UNSC.

Finally, this is all theater. Observe what kind of Russian and UN sponsored Constitution is agreed upon for Libya. Addtionally, will its oil sales be in dollars ? Will the Rothschild installed central bank be dismantled ? Thats where your answers lie. Anything else is just a nice spectacle.

hopefully this is the first step towards a true national govt