On April 18, forces loyal to the Government of National Accord (GNA) declared that they had captured Tamanhint Airbase in central Libya from the Libyan National Army (LNA). According to pro-GNA sources, several LNA vehicles and other qeuipment were captured in the raid. 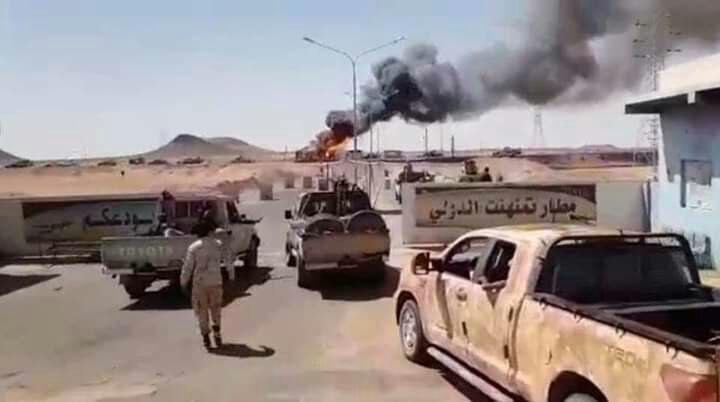 Later pro-GNA units were forced to retreat from the area and the LNA restored control of the airbase. Despite this, the attack on this aribase is a notable sign revealing the strategic weakeness of the LNA force advancing on Tripoli. While the LNA controls a large part of the country, many areas were “captured” by making local deals and alliances with local communities. However, many of these communities are not ready to fight for the LNA. So, the security situation in many of these areas remains complicated and prepared pro-GNA units are easily capable of operating there if they are ready to risk.

At the same time, LNA units continued their advance near the GNA capital of Tripoli. Over the past few days, they have achieved little success in this effort. However, Tripoli International Airport still remains in the hands of the LNA. 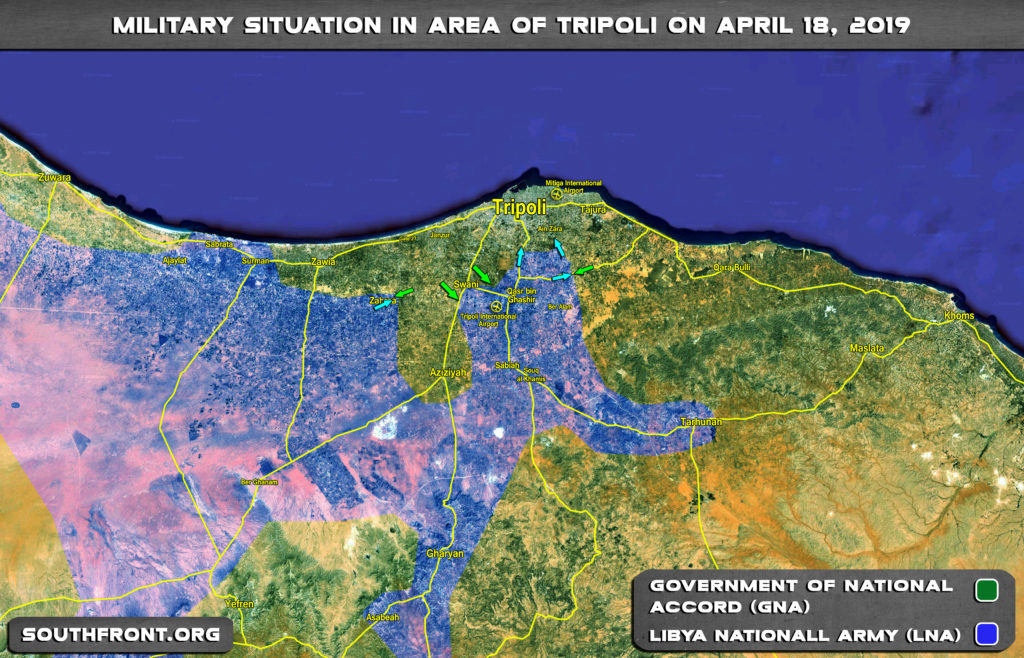 LNA need to cut the road to Misrata and cut road to Al-Zawiyah in order to besiege Tripoli. Also the Al-Aziziyah pocket needs to be cut and cleared out before any of these can happen first

GNA forces attempting to besiege LNA by capturing Gharyan and linking up with Kikla… halting the advance on Tripoli and cutting off LNA western pocket from the other. If LNA let this happen then it will be major fail leadership

Sukhoi is correct. As I see it , on the ground :: 1. The Tripoli-Tunis coastal road is blocked by LNA forces in the Sabrata and Zeltin areas, thus bottling up/isolating the local militia in Zawiyah and Zuara. 2. The Tripoli-Misrata coastal road (Main Supply Route aka MSR) remains in full use for re-supply of Misrata forces defending “their ” turf inside Tripoli district. LNA must cut, or at least interdict/set fire control between Tajura and Qasr al-Qarabuli to stop enemy movement. However even if this land MSR is cut, remember that Mitiga AB is operational and that the sea route is very much in use as a maritime MSR – NATO forces (Italian/British/French/American) have bases and permanent naval facilities in Misrata – I fully believe that even if the Sarraj puppet and the jihadi gangs are defeated in Tripoli, NATO will defend Misrata and use the Misrata Brigades as their proxy forces gainst the LNA https://uploads.disquscdn.com/images/a98c1008c141b5ec7049f7d54977e5d6563aeaf27350574e2360f93d5b743682.jpg (like the SDF in Syria) 3. The threat to Gharian is real, now that GNA gangs control the Azaziya Junction – so far a setback but not a major defeat for LNA.

With the Tunis coastal road cut off GNA is completely reliant from maritime support or air support. It is like a huge siege taking place.

Have the zionists fight with the zionist churches by burning their churches and claiming its done against the zionists (to force the pagans) and keep asking lmvh and kerin for compensation until they are bankrupt or assets powned.

SF I suggest you also look into the fact that turks are supporting GNA and now are preparing to send jihadists in libya. I wonder how the russians will feel about it though from the moves between turkey and russia they dont seem to care much.