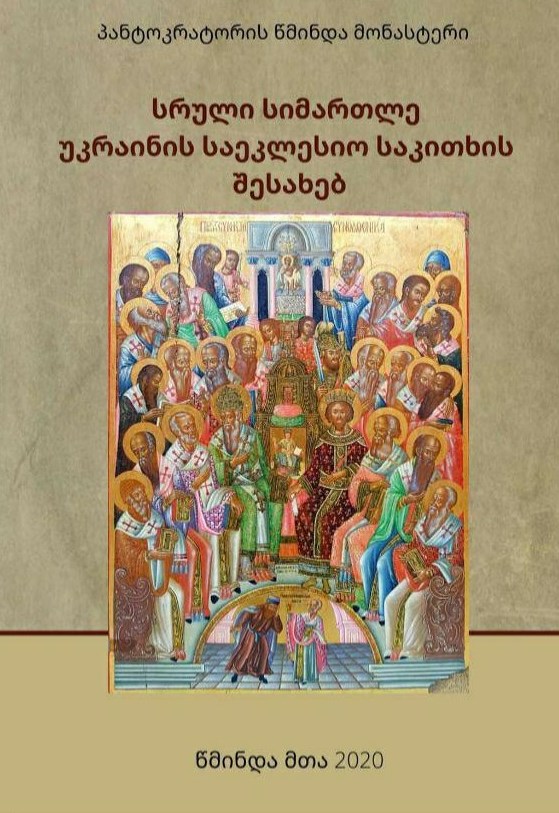 The Patriarchate of Constantinople continues its propaganda efforst to justify its project of the so-called Orthodox Church of Ukraine, a pseudo-church organization established on the territory of Ukraine wiith the aim of fighting the canonical Ukrainian Orthodox Church (Moscow Patriarchate) and promoting the globalist agenda.

Constantinople-controlled structures issues a propaganda book promoting its political adventure in Ukraine. The book, published by Pantocrator Monastery on Mt. Athos, is being actively translated to various languages and distributed among clergy, teachers and students, public figures close to the Church, and journalists covering Church questions. The book blames the Moscow Patriarchate for the Church crisis in Ukraine and accuses it of creating the schism there in the early 1990s.

The Patriarchate of Constantinople, with the support from the Washington establishment and neo-liberals, pretends that the current church crisis in Ukraine is the matter of religious freedom. They in fact support the presecutions of the followers of the canonical Ukrainian Orthodox Church (Moscow Patriarchate) and claims that Ukrainians cannot be free if they worship in its churches despite the fact that a majority of Ukrainians associate themselves with the canonical church.

In fact, Constantinople, the Kiev government and their Western sponsors use the ‘independent’ Ukrainain church as a tool of promoting their own agenda in the country as a part of the wider strategy of dismantling the conservative societies of Eastern Europe.

Lol…looks like generating new religion under someone’s control/influence ,maybe So-called globalists told ukranians:…”You have senses which you believe God gave you, but they’ve led you astray, right? You worked through a math problem with the greatest amount of focus that could be expected of anyone, you were sure you saw the answer clearly and distinctly, then it turned out being the wrong answer (Crimea-donbass etc). Why would an all-good god give you senses that fail and give you no way to correct them?”..Here comes Globalists and solve this problem for you…Ps:Ukraine gets speedblitzed from all angles and all possible holes…

Llast time they joined the Empire, they lost 9 million so what could be worse? :)

Since they knew that they dont believe the way they are going and its too late to make another choice….xD

This is a topic of such world shattering interest, man.

These rotten institutions have nothing to do with the word of God and the teachings of Jesus.

They are ghosts of imperialism