Spending on weapons and other military costs grew by more than one percent in 2015, marking the first year of growth in total military purchasing by governments worldwide since 2011, the Stockholm International Peace Research Institute found in a report published Tuesday. 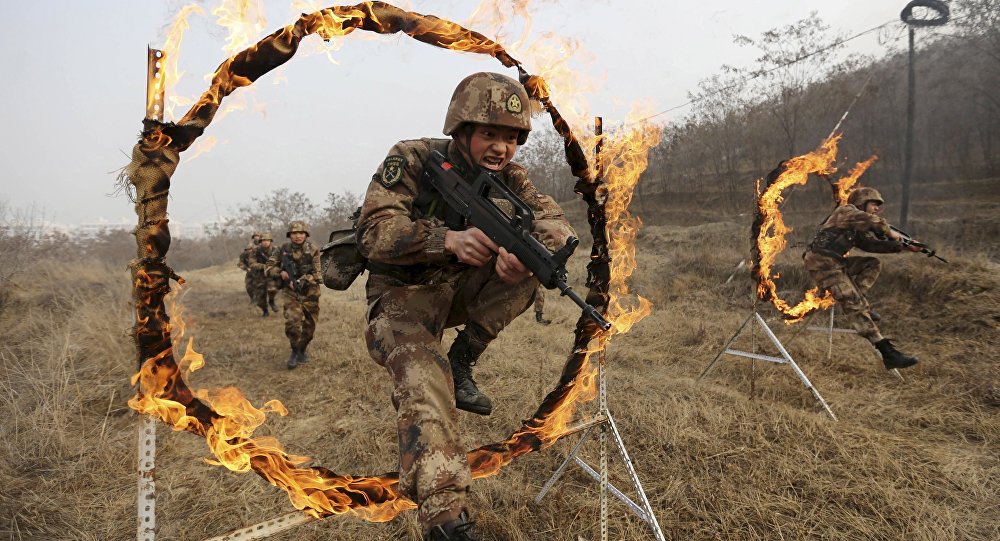 The United States remained by far the leading financier of militarism worldwide, spending nearly $600 billion, according to SIPRI. The real figure rises as high as $1 trillion once the Pentagon’s “black budget,” “contingency” money for the wars in Iraq and Afghanistan, and other hidden expenses are taken into account, according to the Center for International Policy.

The Chinese government continued to fund the second largest war machine, spending $215 billion last year. Military spending by states in Asia and Oceania in general surged by 5.4 percent in 2015, an increase driven by the intensifying US war drive against China, which has militarized the entire East Asia and Pacific region, boosting weapons purchases by a coalition of US-aligned regional states, including the Philippines, Vietnam, Indonesia and Japan.

“Heightening tensions between China and various countries in the region contributed to substantial increases in expenditure,” the SIPRI report notes.

A vastly outsized share of the growth in spending also came from Eastern European and Baltic governments aligned with the US-NATO strategic drive against Russia, including Latvia, Estonia, Lithuania, Poland, Romania and Slovakia.

Overall spending by Middle Eastern governments rose by at least 4 percent in 2015, the report found. Saudi Arabia rose to become the third largest spender in 2015, $87.2 billion in total and $5.3 billion on its year-old Yemen war alone.

The report noted the staggering rise in Iraq’s military budget, which grew by 536 percent from 2006 to 2015. Among the Middle Eastern powers, however, none came close to the US-backed Saudi monarchy, whose war budget surpassed that of Russia by more than $20 billion.

Russia, whose military is endlessly demonized in US and European media as the primary threat to world peace, spent only $66.4 billion in 2015, lagging well behind Washington’s favored semi-feudal client regime.

Governments worldwide are scrambling to beef up their forces in response to ongoing war scares and feverish geopolitical tensions. According to SIPRI, a subset of governments have implemented especially sharp upticks in their military spending in response to active or imminent regional conflicts, including Algeria, Azerbaijan, Russia, Saudi Arabia, and Vietnam.

The overall growth of world war expediters came despite significant reductions by a handful of governments in response to plunging oil prices, including a 64 percent cut by Venezuela and a 42 percent cut by Angola.

In a supplementary report, “Military versus social expenditure: the opportunity cost of world military spending,” SIPRI examines the “military burden” imposed on economies and social infrastructure by the renewed arms bonanza.

The relentless siphoning of social resources into the global war industries is feeding conditions of mass deprivation in every region on the planet, and with special intensity in the ex-colonial and semi-colonial countries, where social spending is already minimal.

“In the past two to three years there have been particularly large increases in the military burden in Eastern Europe and the Middle East, as well as in the subregion of North Africa,” SIPRI notes.

According to a 2015 assessment by the UN Food and Agriculture Organization, the reallocation of a small fraction of yearly war spending towards socially valuable purposes would be sufficient to resolve a laundry list of problems plaguing world society.

The UN analysis found that only $265 billion annually would be required to end conditions of extreme poverty and hunger worldwide, a sum that amounts to less than 13 percent of annual worldwide war expenditures in 2015 prices.

An additional $240 billion, or 12 percent of annual military costs, would be sufficient to realize universal primary and early secondary education globally.

No governments or establishment political parties even pretend to pursue a program that would transfer arms funding to social spending along these lines.

Rational allocation of the immense wealth produced by the global economy is impossible within the historic framework of capitalism and imperialism, in which the various bourgeois governments are locked into a global struggle for markets, access to cheap labor and profits, in which the strength of their respective militaries plays a decisive role.

Far from slashing their expenditures in the name of social benefits and infrastructure, all states worldwide are striving to finance their militarist agendas through ever-greater levels of social cutbacks, exploitation and police repression against the working class.