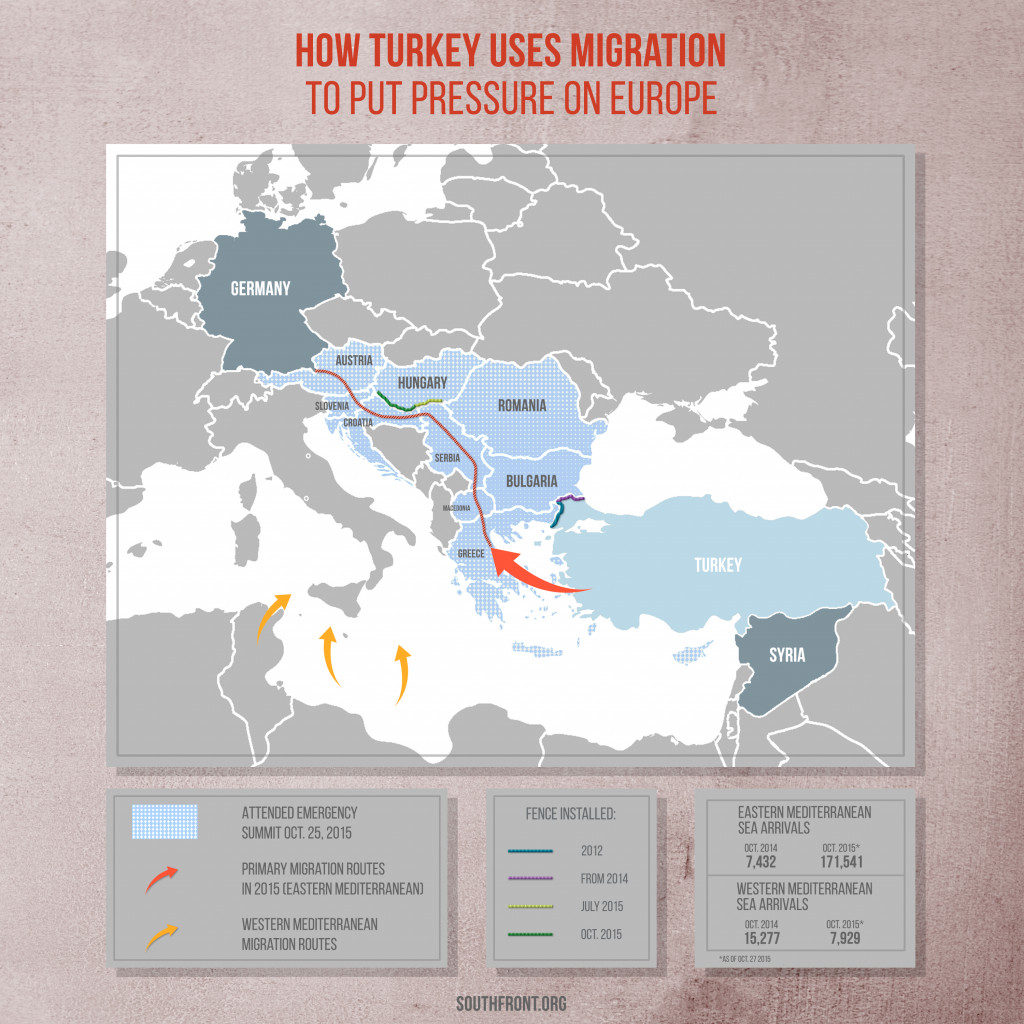 Situation as of Oct. 2015. Click to see the full-size map

Berlin has given Ankara a deadline of ten days to show good will by “significantly” reducing the influx of refugees and migrants across the Aegean Sea, otherwise Europe will no longer be able to avoid the closure of national borders in a row, that was said today in an analysis of the Paris newspaper “Le Figaro”.

Ultimatum, which was set by the German Interior Minister Thomas de Maiziere, refers to both Ankara and Athens and the other capital cities which have not restrained wave of newcomers, and the time limit is not accidental, because it will be in exactly 10 days, at a summit of EU and Turkey, time to draw a balance of “pact” which has so far caused only disappointment on both sides, writes the French daily.

German Chancellor’s is, as noted by French daily, under the pressure of the internal deadline, since in less than a week, on March 13, her Christian Democratic Union is threaten by loss, to the benefit of the extreme right-wing, in the three key regional elections, the first ballot since the beginning of the 10-month crisis in which Berlin found itself, and that for the ruling party could be an ” punishment “.

“Until March 7th we want to note a significant decline in the number of refugees at the Turkish-Greek border,” Thomas de Maiziere said, adding that if this does not happen, Europe needs to take additional measures.
German minister did not specify exactly what measures he has in mind, but he said that “we’ll see when the time comes.”

This message, however, several diplomats interpreted as a “catastrophic scenario”, in which Berlin drastically reduces the number of refugees that will be received, after he strongly urged them to come last year.
In that case, the border across Europe would be closed, in a chain reaction, which for Schengen, could be a sign that this zone came to an end, as it was said by the unnamed ambassador.

Austria, with its precautionary measures, showed how this might look, while Greece, where disembark almost a million newcomers for a past year, could soon become their final destination, concludes “Le Figaro” as quoted by Tanjug.

Erdogan’s message was clear to Europe. Either you let me genocide millions of Kurds or I will unleash migrans and refuges all over europe. Erdogans message was clear, make your choice. The ethnic cleansing of Kurds Vs. waves of Refuges to Europe who will rape your daughters.

nuke Edrogan right in front of his ass.

Is Turkey really pressuring Germany, or did former communust leader Merkel, with her profound animosity toward ethnic Germans, invite this as part of a global plan?

Perhaps Merkel (herself) is the victim of a globalist (Soros) plan?

Who is hunting Angela Merkel?

Always great to introduce some people to new things.

All German political establishment has Nazi past starting with the first post WWII kancelar Konrad Adenauer. They played important role in infamous NATO operation Gladio according to the personal testimony of the retired French general who attended their secret meetings which could be watched on YouTube. To portray Mrs Merkel as an innocent betrays an ignorance on the matter to say the least. She has been just fallowing the orders from Vatican. It seems like the Pope’s order to the EU to take all the refugees on board has passed completely unnoticed as it would have nothing to do with the current crisis in the ME and Europe. Again the secular world view has been playing on our minds. Unless we start realizing that religion does matter in politics we will never have a complete and well rounded understanding of what’s happening in the world. “It’s not all about oil stupid”

You’ve been only scratching the surface. Hopefully both of us will live long enough to verify the truthfulness of our views. My take, very soon you’ll be a very pious person like the rest of the world because you will not be able to buy or sell otherwise. Secularism has reached its end of life cycle mark my words. No explanation to the role of the pope in your comment because you have no clue right.

So funny that people still point to the Pope as being so powerful when it’s against the law to even post the ten commandments anywhere on public property in america, that traditional Catholic priests are being assassinated right and left, that Catholics are being genocided, that churches are being sold and burnt…if that’s power, I’d hate to see what destruction looks like. Present Pope is so Jewish it’s difficult not to see it. So Jews have made it to the top of the Vatican, the Freemasonic dream come true, and first thing they do is tell the world that no one has to be Catholic anymore, and that traditional Catholics are evil. They destroy everything they touch. Even amidst all this destruction of the Catholic Church, the comment section still points to the Pope as the supreme ruler telling every nation the world over what to do and they do it. LOL.

To my account person who has the power to change the chief of staff of the world super power or dismember such a political Behemoth like Soviet Union has come close of being a supreme ruler. He has following greater than a billion in the world today. On Jewish infiltration. Pope Karol Józef Wojtyła was an agent for AG Farben selling

look at the map: they get to walk freely all the way across europe, crossing 6 international borders before arriving in germany. maybe someone should simply guard their own borders! sounds familiar to us in america! what is a country if it does not have borders? turkey is a problem, but every country along that route is facilitating them.

Germany is still occupied country, which has to accept the military administration of the US. They can do zero until they revolt against US, not against US puppet Merkel.

The yanks also control all newspaper and television output until i believe 2069. When Germany will be “officially” as opposed to actually free from the US yoke.

Looks like the Israeli/US plan to partition middle eastern countries is intended to apply to Turkey, Syria and Iraq. The Security Conference in Munich a fortnight ago was where this proposal was raised and I see that Turkey didn’t oppose it immediately. ‘Silence is consent’ so that indicates that Erdogan is really supporting partition. Best to get that partitioning underway soon commencing with Turkey.

At least the ethnic Turks will then be able to move on in peace with their leadership of Erdogan and Davutoglu still in place. The periodic hostilities with the Kurds will cease as they actually occupy what was once Armenian land and will now become a self governing canton. Perhaps the absence of those gross war expenditures will raise all the people’s wealth and services now.