Germany is preparing to raise its share of NATO’s budget by €5 billion, up to €47.3 billion in 2019, according to German news agency dpa.

That would put Germany’s defense spending at 1.35% of GDP, still lower than the 2% target for NATO members. Regardless, this marks the biggest increase for Germany since 1991.

The information is not yet officially confirmed, but if true this would mean that Germany has at least partially caved to US President Donald Trump’s demands for EU allies to spend more on defense and to increase their share of spending on NATO in particular.

At 2018’s NATO summit, Trump threatened to leave the alliance if members did not reach the 2% target soon. He has repeatedly singled out Germany as a country that doesn’t spend 2%.

The decision to spend 2% of GDP would follow a gradual increase and was agreed upon in 2014, during the NATO summit in Wales. Each member has until 2024 to reach the 2%, and Berlin has continuously repeated that it already has existing spending plans.

“We will do our part to ensure that NATO can meet all the challenges of the future,” German Foreign Minister Heiko Maas said.

Still, Germany formerly said that it plans to reach 1.5% by 2024 and then reach 2% at some other point in time.

Defense Minister Ursula von der Leyen repeated the government’s pledge to spend more on defense, albeit in smaller increments than Washington would like.

Speaking in the Bundestag, Germany’s lower house of parliament, she added that “we cannot allow any doubt to arise regarding our solidarity” from partners in North America to ones in Europe.

Of course, the biggest reason for increased spending is to combat “Russian aggression.”

In April 2019, US Vice President Mike Pence said that the biggest economy in Europe can’t lag behind.

“It is simply unacceptable for Europe’s largest economy to continue to ignore the threat of Russian aggression and neglect its own self-defense and our common defense,” he said.

In March, US Ambassador Richard Grenell the government’s consideration of “reducing its already unacceptable commitments to military readiness is a worrisome signal to Germany’s 28 NATO allies.”

Following Grenell’s statement and calls for more spending by Germany, he was accused of meddling in Germany’s internal matters.

Kubicki said it is intolerable that “the U.S. ambassador would once again interfere in political questions of the sovereign Federal Republic.”

“If a U.S. diplomat acts like a high commissioner of an occupying power, he will have to learn that our tolerance has its limits,” Kubicki said.

The Social Democrats’ parliamentary manager Carsten Schneider weighed in too, saying: “Diplomatically, Mr. Grenell is a complete failure. This entire thing seems like the behavior of a naughty schoolboy.”

In February 2019, it was reported that one of the bigger challenges Germany faces in terms of military spending was due to a budget gap.

The Finance Ministry estimates that Germany would need to allocate far more money to defense spending than it already has in order to raise the defense budget to 1.5 percent of economic output by 2024, according to an alleged ministry analysis.

The analysis reportedly also predicts a €25 billion ($28.6 billion) shortfall in tax revenues up until 2023 due to a slowing economy.

On May 15th, Angela Merkel said that the EU needs to bond closer so that it can stand against the US, Russia and China.

“There is no doubt that Europe needs to reposition itself in a changed world…. The old certainties of the postwar order no longer apply,” Merkel told the German media.

“They [China, Russia and the U.S.] are forcing us, time and again, to find common positions. That is often difficult given our different interests. But we do get this done—think, for example, of our policy regarding the conflict in Ukraine,” Merkel added. “Our policies on Africa, too, now follow a common strategy, which a few years ago would have been unthinkable. So we keep putting one foot in front of the other. However, our political power is not yet commensurate with our economic strength.”

The Financial Times allegedly saw a letter, in which Washington warns against greater military co-operation between EU countries.

It said that Washington was “deeply concerned” that approval of the rules for the European Defence Fund and the Permanent Structured Cooperation, or Pesco, launched in 2017 to plug gaps in Europe’s military power, would “produce duplication, non-interoperable military systems, diversion of scarce defence resources and unnecessary competition between Nato and the EU”.

“It is vital . . . that independent EU initiatives like EDF and Pesco do not detract from Nato activities and Nato-EU co-operation,” the letter said.

Washington said the rules for the EDF contained “poison pills” that would prevent companies based outside the EU, including the US, from participating in military projects.

Germany, like most of sniveling EU is an occupied, defeated puppet state that is a vassal of US warmongers and has no choice but to cater to US military industrial complex.

The EU it’s about to implode anyways… so it doenst matter.

and then her economy is 100% dependent on russian gas.

Is that bad ?, European Countries have far more in common with Russia than we do with the Yankers.

Your a good lad, but hush, wwhen you do not know the facts: k check what happens to germany if the russians turn the gas supply off and then we discuss it again.

Whatever you say. I think you are wrong on this one.

Even if they turn the taps off, we will get gas (LNG) for Qatar or many, many others.

Germany is saying it is against ‘Russian aggression’ while thinking about the US demanding that Germany should obey them.

Wonder if the US will shut up about Nord Stream II, if Germany spends more on NATO and US weapons?

Talking about NATO and Germany, the Peter Sellers Award to NATO Brain Storming Ideas goes to:

With the article below, it is pure satire.

The latest NATO exercise, over in Bavaria borders, involved the Israel Parachute Regiment, who had to capture a Russian Village, whilst under the instructions by the Germans. The Russian’s were played by the German Unemployed, who were ‘paid to play’.

Besides Jewish Paratroopers, working side by side, with German Forces, the other part of the very sick satire, was the fact it was the Russians that sent the German Employed back to Berlin, courtesy the Battle of Stalingrad.

Wonder which one of these cuties came up with the idea, for the latest exercise? 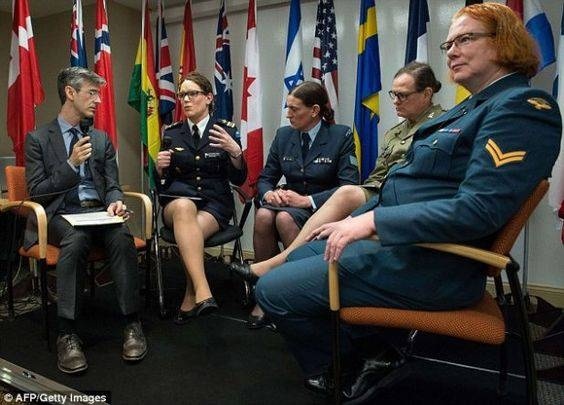 Now why would NATO teach Israel how to capture a Russian village, when they have had no success, themselves, in that direction. How to start a civil war and refuse to leave, when requested, they can manage that. However, NATO trying to capture a Russian Village, as an antagonising exercise, dream on Stollensberg.

Why NATO Teaches the Israeli Military to Capture Russian Villages…

Seriously surreal, when reading this section:

‘…Jewish soldiers fighting shoulder to shoulder against German fighters capture a Russian village. It is this scenario that was played out this week in the Bavarian forests. The manoeuvres of NATO in Germany, in which thousands of soldiers from all countries of the Atlantic bloc participated, this time distinguished itself by the participation of a full battalion of Israeli parachutists. Many wrote about these manoeuvres, but the western press reported about it evasively – like saying, manoeuvres are just manoeuvres. Only the Israelis were not ashamed to release a video in which it is said with all frankness, worthy of a better cause: our enemies are Russians, and our objective is to capture and occupy Russian villages. The Bundeswehr is our friends and comrades in arms…’

(The Russian were played by the unemployed of Germany’. Seriously cracked up laughing. Who sent the Germans back to Berlin and they were not the unemployed Germans.) Only NATO or their mates in the Atlantic Council could dream that one up.

So, why are the Germans, depsite all talk, deciding it is time to start upping the Defence Bill? EU aka German Forces or something else, like my waffle?

Cute dog who delivers a perfect comment. Now get back to your wine.

Is it 2 %?, perhaps they need to maintain the crap they have. 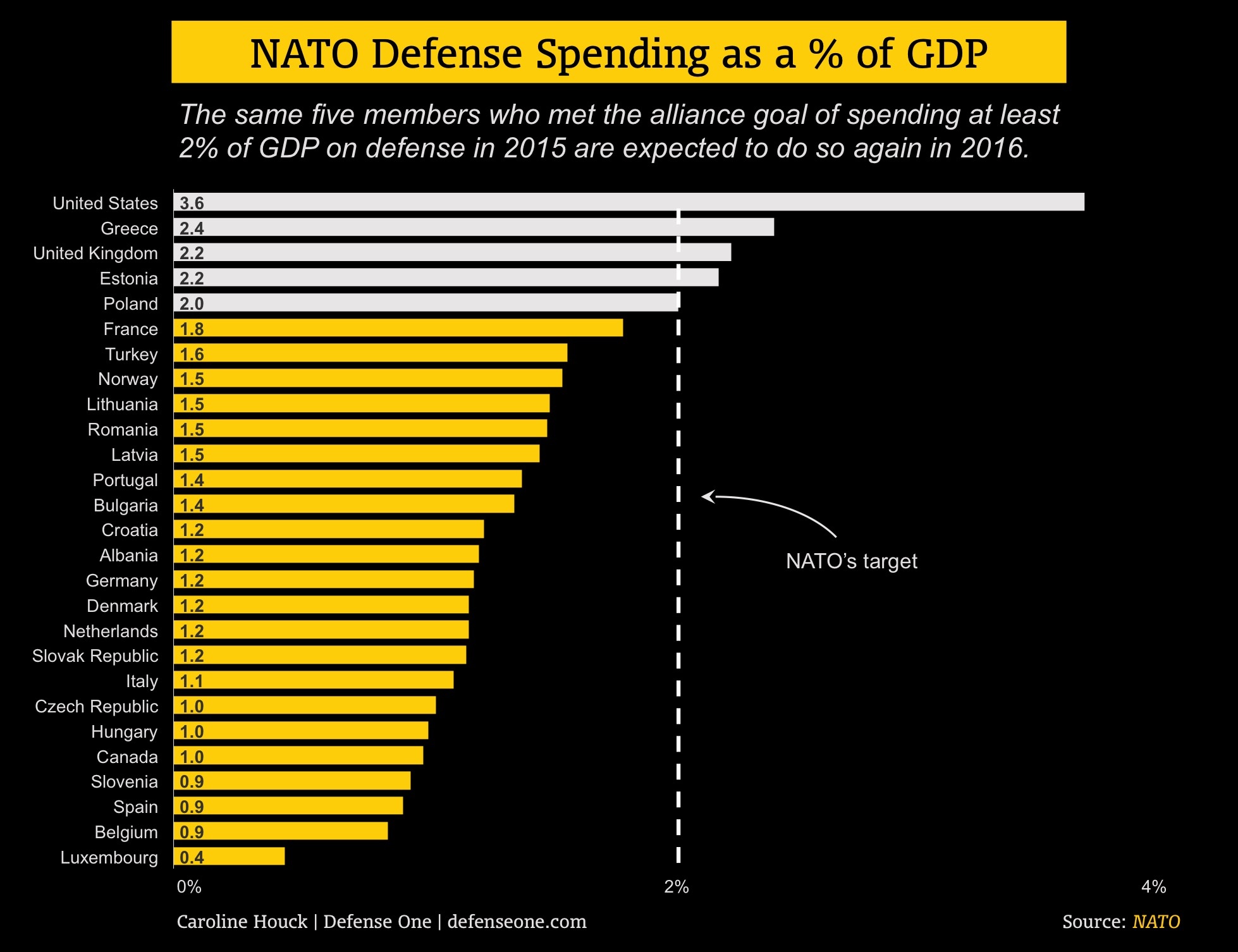 Yeah, moving from one partly functional tank, to what, 3….. huh, like owning an Rols R. better have 3 because starting isnt an priority making RRs, its an showcase.

Funny thing this days, when some people chokes on their moring coffy, just by going into Russian Ins.
Its become an contest of whom and how deep do the colective dementia run this days, because truth hurts, if it dont hurt, its not true enough.
One thing must be crystal clear, I am in it for just one thing, the Truth, the fall out is not my consern at all, its the peoples problem, not mine.
When ww2 broke out, millions where killed, we have debated by whom, the western forces just as to day, names changed, faces to, but the road remains the same, full spectrum dominance, and what I do know, when the numbers fly, is again, are they even real, some dispute this while screams about other kills, but the sad truth is, Russian Comunism, was an evil force long before the ww2 theater kicked in
(the broklyn gang, of 400 central comite members, the first 400, ca. 280 of them was from Broklyn, huh, nice one, right scumbags),
I have read insane sniveling drivel coming from comie wankers in Finnland, and where they claim the winter war was because of empirialistic Finns, yeah, had people in Karielia, of course, why do you think they did that, because it was stil Finnish, like the region I am from, Petsamo/Sunejel/Pasvik) because Stalin was hunting people in hunderds of thousands, wars agains countrys, and yet when the Sovjet attacked, the Finns wherent completel idiots, and of course, itellegence as then as to day is important, and stay behinds to, etc, etc, and payed attention to what the Commies where doing inside Sovjet, and somehow somebody cant digest that.
It started when Stalin, ordered to bomb their own city in Karelia and blamed it on the Finns, sounds familiar dont it, aka False flags, some are even so lame they thing FFs are something new, its equally old as prostitution.

To twist it to be about Hitler and Manerheim did this because Rockefellas or whateveras, is downright false, and to ignore the decades of Stalin purges against shows intellectual dishonesty.
The reason you loose this commie suckers, is not because of been a commie, but because of ignorance and arrogance, and I have said it before, I do this as an payback to the German and Fnnish people, not for me, thats to late
I its not about or because of Hating Russia, I am Russian by blood, maybe more than most of you ever will be or to become.
The truth is, they lie about everything, all the time.
Pekka, Russia isnt the problem, UssA is.