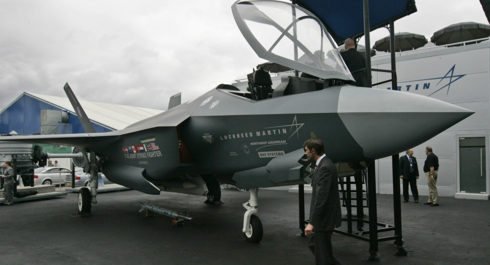 Germany’s Ministry of Defense officially ruled out the F-35 joint strike fighter as a choice to replace its Tornado fighter jet fleet, according to anonymous sources cited by Defense News. The story was initially reported by German outlet Augen Geradeaus.

The Tornado fighter jet fleet will be replaced either by a Eurofighter or a F/A-18.

Information about operation, economy and the timelines would be requested from the manufacturers Airbus and Boeing, respectively of the Eurofighter and the F/A-18.

Either of these will be used until the Franco-German Future Combat Air System (FCAS) is commissioned from around 2040 onwards.

Before the reports that the German Defense Ministry confirmed that the F-35 was officially out of the running, Reuters on January 31st reported that the ministry was considering splitting the buy between the Typhoon and either the F-35 or Super Hornet.

The Reuters report has been updated since. However, after the update it claims the following:

The outlet reported that Airbus welcomed the news about the Eurofighter replacement purchases, and said it remained convinced that its jet offered the lowest-risk prospect for replacing the Tornado jets.

Boeing declined to comment, as did the US embassy in Berlin, according to Reuters.

“We have not been officially notified of a decision on Germany’s future fighter. The F-35 delivers unmatched value as the most capable and lowest life-cycle cost aircraft, while delivering the strongest long-term industrial and economic opportunities compared to any fighter on the market. As the foundation of NATO’s next generation of air power, the F-35 is the most advanced aircraft in the world today, and includes Electronic Attack capabilities well beyond any specialized fourth generation aircraft.”

The Tornado, developed in the 1970s by an Anglo-Italian-German consortium, is fast approaching the end of its service life. Maintaining the existing planes is costing Germany billions of euros, which the defense ministry feels should be used to buy newer, better planes.

F-35 are fighter jets between helicopter and fighter jet. Which is not feasible for front line role. F-35 is stealthy for specific frequency of radars and not for all frequencies of new radars. Moreover, its maintenance cost is very huge. This is complete wastage of money. Its better for Germany to develop their own fighter jets.

Yes, it is high time that the Germans are told that it is extremely Anti-Semitic for the German Luftwaffe to refuse the generous offer from Zionists in the US, to sell the uber expensive bag of US shit, that is the F35, to the Luftwaffe.

US sanctions will soon follow and a colour revolution in Germany is well overdue. The US War on Terror must never end. Zionist Democratic Values must be adopted by all in the world and there is no possible discussion about this.

Free nations of the world with oil and resources must be told Shut Up and to support the US Coalition of Terror.

germany is still 3rd reich in war with poland. germans are still formally nazis and they want to keep it that way!

a fact is that poland is a superfluous statehood in europe that europe could do well without. thus join poland as a sub-country to germany and the whining will decrease by about 75%.

I agree. Whine a lot and have not contributed no the Eu at all apart from cheapen wages in the UK.

Simply Uncle Sam’s spoilers in the Eu like Kossovo and Albania.

Perhaps Russia and Germany could have 50% each of Poland :)

Same dividing line as last time ? Except for Kaliningrad of course. :)

There is little scope for a NATO 5th column in Kaliningrad either.

“Concerning the expulsions, Winston Churchill said, “There will be no mixture of population to cause endless trouble. A clean sweep will be made.”

Oh no, nobody wants Poland. Maybe if the inhabitants were sent to the US?

They do, in Chicago. Its virtually Poland, with many, many blacks.

when germany attack Poland then they end with Polish armies on their ruins, just like last time

I don’t know what is your first language. Its better for you to use google translator.

cut all money to the warmongering sobs! assad, putin, lula, iran , turkey, quatar… day by bad the team with integrity, morals and internaltional law are showing the way and the light at the end of the tunnel is 1967 borders for the few non crimminal civilians that might exist/remain after justice takes care of the others

LoL that was funny,you really made my day with that comment, thx!:)

F35 face at least is more human than Merklova.

Didn’t you know? Germany is fed up with Mutti Merkel. That’s why she’s stepped down as party leader of the CDU and this government will be her last. Her successor is already being groomed.

What’s that got to do with the shape (and agility) of her butt ?

‘Maintaining the existing planes is costing German billions of Euros, which the defense ministry feels should be used to buy newer, better planes.’ Buy the F 35 and kill two birds with on stone …. not better new planes that cost twice as much to maintain.

If Germany continues like this… US will have to “liberate” Germany again ….and soon.

Nah, Germany was never in the running for the F-35 to begin with. And hasn’t been much in the running for any new US aircraft program since the F-4 Phantom. They didn’t participate in the F-16 program, and basically everyone who did that is now buying the F-35. Besides, as far as the US government is concerned it doesn’t matter much, F-15 or F/A-18, some American company is still going to score either way. I still think it will be Typhoon though, as the Germans already operate them and additional units will be good for German industry.

In defense of the Star Fighter, German pilots went from simple subsonic clear weather fighters like the F-86 Sabre straight to the mach 2 capable all weather F-104. Talk about a steep learning curve! They also parked this very complex machine out in the open where wind and rain had their way.

The F-104 was obviously ill suited to be a low level fighter bomber, any idiot can see that looking at the plane. It’s a high speed high level interceptor. And that’s how the USAF only used the plane. But sometimes a product gets a poor rep because its customers don’t know how to handle it properly. And German pilots in 1962 weren’t ready yet for this advanced an aircraft and as a result handled it poorly. The same happened in the Dutch air force. As experience with the aircraft and the all weather ground attack role increased the number of crashes went down across the board.

F-35 have been grounded world wide for 6 months now. One crashed in Virginia, another flown by the Israeli’s unexpectedly hit a bird, or so they say. Very close to Syria too. And suffered major damage. Its a flying garbage truck, to say the least. The Pentagon, and the Contractors will never break even on that plane.

Of course Lockheed Martin will break even on that program, they’re already into the stratosphere in regards to profits, so I doubt the F-35 is losing them any money. Lockheed Martin will laugh all the way to the bank over this program, mark my words. The same can’t probably be said about the countries that will operate it, but caveat emptor!

good, a flying coffin like the ones they bought eons ago. no use for such crap.

Was that the US Starfighter, Verner ?

I think they were f4 phantoms, flying coffins no less.

I found this information about the US made Starfighter that was sold to the Luftwaffe, Verner. I am old enough to remember it :)

Common sense decision with courage to back it up. Good for Germany.

Germans were humiliated by British and USA in ww1 and WW2 so humiliation history reflects in their minds.Payback time.

not quite, germany had the best airplanes the best tanks and the best gúns and the best soldiers but lost a) because russia was to vast to occupy successfully and b) the destitute states of morons (aka usa) kicked their industrial availabilities into high gear and even though the stuff made was inferior to anything the germans made, the sheer number beat the higher quality german stuff. but without russia germany and hitler would have won since the brits were useless and the french a larf at best and the morons useless as..holes,as always.

There is another dimension You might be missing here, it’s service level. Brand new, beautiful plane,tank,gun is good before service time. When this happens how many resources do You need for service to complete gives overall quality of the best this, best that. T-34/85 had much better service level, not to mention better gun than any type of Ghepard,Tiger. If service requires and army of logistics and longer time and resources opposed to crew member and much lower time to do the service, than a man should think twice. Koenigtiger had wast armor, IS-2 had shape that compensated lack of vast armor not to mention IS-2 had far better gun. Stukas as CAS plane was great due to psychological effect during diving but it had to be accompanied with air superiority fighters, on the other hand there was IL-2 flying fortress that performed CAS alone. You see where I’m going, its all about resources to maintain the operation. You mentioned the German soldiers were the best, I’ll give You one example operation “Schwartz” where 127000 soldiers from Germany, Italy, Bulgaria and NDH using over 300 planes couldn’t defeat 22000 partisans (minus 4000 wounded from earlier operation “Fall Weiss”). The only credit to Wermacht was submarines and Vergeltungswaffen.

russian tanks and planes and guns operated in the worst conditions which the germans did not. so basically the better arsenal was on the german side whereas the russian’s stuff was more of an all weather useful kind. the brits and the french were useless and had it not been for american supplies to the brits in africa, rommel would have made the brits pound sand.

Yes, correct You brought up weather condition into equation just like AK-47 vs M-16 during Indochina wars.

Yes in WWI, but not quite in WWII. Russia destroyed Germany, and USA re-built it !

Correct me Gustavo according to available information Germany was split in two. Russians rebuilt their side USA was looting Germany resources and available tech and best engineer’s. With least resources and germans on the other side Germans could afford to rebuilt under USA force labour

Wise German decision, but will German be able to stand the USA pressure ?

germany is on collision course with the destitute states of morons (aka usa). you have the north stream 2 from russia and now you have the f35, which most likely is a dud, by all accounts, but that is of no consequence since it’s an american product and the morons need to sell their stuff to the serfs. and then you have the INF-agreement, which germany, being in he center of the deployment area, will have problem accepting and will do the utmost to derail. in fact there is resistance everywhere in europe to the morons self-destruct policies. it seems europe is reluctant to join the morons in their quest to steal the wealth of Russia and in the process ruin everything in their way.

the best thing from these policies is that the destitute states of morons (aka usa) won’t be able to afford to defend israel very much, so israel’s enemies, and those are many, will be able to wipe israel off the map and send the squatters on their way to the next diaspora and return the stolen land to the rightful owners, the palestinians,