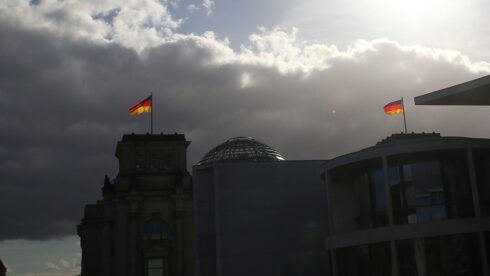 Germany faces its biggest crisis since the 1950s

In October, more and more information is emerging about Germany’s final inclination away from neutrality in the war in Ukraine toward its full support. Beginning with the deployment of the U.S. Central Command on its territory and the transfer of intelligence information to the SSU and MDI of Ukraine, to the transfer of actual weapons (Iris-T air defense) – all this expresses the real position of Berlin at the moment.

At the same time, against this background, as well as from the very beginning of Russia’s special operation, the welfare of European countries, and Germany in particular, is gradually deteriorating. Record inflation is contributing to everyone’s unease. 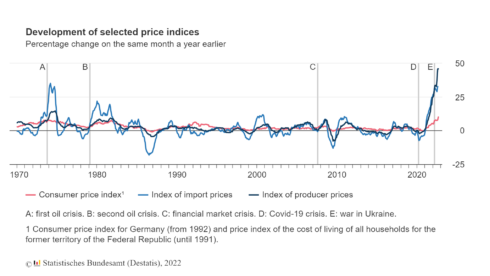 Changes in price indices in Germany from 1970 to the present

Back in September 2022, the producer price index for industrial products was up 45.8% compared to September 2021. As reported by the Federal Statistical Office (Destatis), this was the same increase compared with the same month of the previous year as in August. In July, the increase had been +37.2%. Compared with the preceding month, August 2022, the overall index rose by 2.3% in September 2022 and thus increased less strongly than in August (+7.9% compared to July 2022).

The rise in energy prices still was mainly responsible for the increase in producer prices compared to September 2021, due to the high weighting percentage combined with exceptionally high changes. Moreover, prices also rose significantly for intermediate goods (+16.8%) and capital goods (+7.8%) as well as for durable and non-durable consumer goods (10.9% and 18.3%, respectively).

Energy: industry pays more than three and a half times more for natural gas than a year earlier

Energy prices as a whole were up by 132.2% compared to September 2021. The strong rise in energy prices was mainly due to the large price increases for natural gas (distribution), which was up by 192.4%, and for electricity (+158.3%).

Electricity redistributors had to pay 259.8% more than in September 2021, special contract customers 148.9%. Prices for small commercial customers, who often conclude tariff-bound contracts, rose by 17.4%. Compared with August 2022, electricity prices increased by 3.5% for all customers.

Prices of natural gas (distribution) were up 192.4% on September 2021. Industrial consumers had to pay 264.8% more for natural gas than in the previous year. The prices paid by power plants were up by 233.1%, those for resellers by 199.9%. The prices for buyers of smaller quantities rose less strongly, but approximately doubled. Across all customer groups, natural gas became 6.6% more expensive compared to August 2022.

Inflation figures as well as Ukrainian refugees arriving in Germany give ordinary Germans no reason to live peacefully today. Should Scholz and company be worried? Ask Johnson and Truss.

Germany needs to let in more refugees, so they can heat them and supply them with all the goods and services they need.

I thought you will write “burn them instead gas and oil” by old german tradition.) But your variant is even better, western countries could take +10-15 million ukros to help Russia to clean Malorossia and Novorossia from nazis hiding behind civilians. If no civilians, nazis would be dead already. So taking refugees is speeding up denazification.

I live in Germany, man we are about to starve, the ice cream i used to buy went from 2,00 euros to 2,79 good job adolf scholz

Tragic. People must be starving for at least 6 months.

Are succession movements possible or does everyone wish to follow Berlin off the cliff?

Europe is winning its energy crisis. There will be no collapse. Instead Europe is dumpling Russian fossile energy for ever. Renewables and new technology is pushing Russia to stage of outdated rusty gas station far from highway.

You are so full of shit yourself.

Roger is an inbred shitskin
Reply to  roger

Peanut butter is €2 per jar and nonody buys it since it is an American thing.

Electricity depends on municipality. I pay €0.32/kWh. The only reason electricity I pay that much is because scammer politicians pushed libtardization of electricity market.

Inquisition
Reply to  Roger is an inbred shitskin

If you want to buy real honey 12eur per kg

Electricity prices are actually going down in Europe. This is likely big surprise for Kremlin leader and his henchmen. One thing boneheaded people can’t get is the fact that wind power has its best season from October to February. And for 2023 there will be in most European countries over 30% more wind power than in early 2022. Russia is loosing its momentum.

Bullshit I live in Europe and my electricity has more than doubled.

Exactly. I paid 27 cents per kw, and now 81 cents. The Ekhman is a fool or a paid propagandist.

He’s just a Jew and writes from Israel

Another kebab supposedly living in Europe. Go back sucking your uncle’s dick.

USA is the shithole of Hell
Reply to  Johannes Ekhman

Why the fuck do I have to pay ten times for electricity if the prices are going down?!

THESE ARE OUR LIVES, AND THE STATE IS ROBBING US OF OUR LIVES TO FEED THE UKRONAZI MEATGRINDER!

Russia is a gas station masquerading as a country.

The US is a bankrupt Pawn Shop owned by the same people who own the Pawn Shop.

you are just copying that fool McCain. You are an ass masquerading as an intelligent person.

Meanwhile, China is buying 30% of Hambourg harbour, who profits exactly?

USA is the shithole of Hell
Reply to  Jull

They can bring several armies here like Khrushchev sent troops to Cuba, but Europeans won’t notice until they have yellow governors with red flags on the buildings (and covid lockdowns for years as in China, of course).

Germany is since 1945 occupied by the US terrorists thats the main reason why Germany is collapsing who has to pay for the US Wars and Occupation . Read their Basic law article 120 about the Occupation .

(1) The Federation shall finance the expenditures for occupation costs and other internal and external burdens resulting from the war, as regulated in detail by federal laws.

To the extent that these war burdens were regulated by federal laws on or before 1 October 1969, the Federation and the Länder shall finance such expenditures in the proportion established by such federal laws.

Insofar as expenditures for such of these war burdens as neither have been nor will be regulated by federal laws were met on or before 1 October 1965 by Länder, municipalities (associations of municipalities) or other entities performing functions of the Länder or municipalities, the Federation shall not be obliged to finance them even after that date.

The Federation shall be responsible for subsidies towards meeting the costs of social security, including unemployment insurance and public assistance to the unemployed. The distribution of war burdens between the Federation and the Länder prescribed by this paragraph shall not be construed to affect any law regarding claims for compensation for consequences of the war.

(2) Revenue shall pass to the Federation at the time it assumes responsibility for the expenditures referred to in this Article.

“Those who cannot remember the past are condemned to repeat it.” George Santayana

The Jews came and bought Germany’s values, cheaply, after the First World War.

Rename it to Jewrmany and be happy!

It doesn’t matter. Even if people need to pay for it in terms of wealth , its better to pay for it then to let the Russians think they are some kind of king of the world. Russian servicemen will witness the fact that a lot more NATO bombs will explode on their heads.

You’re wrong Amerikkka, sees itself as ruler of the earth and Russia disagrees with that along with all nations who resist Amerikkkas hegemony.

It’s better say ”saw”. Its in the past. Today alot of nations have nuclear bombs. The era for big wars is over. Something that Putin did not understand.

Is it lucrative to win wars. Ask the USA and Germany!

The US is dependent on winning this war if it is to continue to maintain its world dominance and a strong dollar.

So not to ruin the surprise for you but the US won’t lose this war unless Russia is planning on invading North America. The USA will just cut and run after the politicians and generals realize they are all a bunch of know-nothing ass hats that can’t win and there is nothing left in Ukraine to steal.

5 point plan for Russia to win

2. take out all airbases by destroying runways completely and all hangars

3. take out all leadership buildings

Russia has very small tactical nukes with 1-2 kiloton yields. They can be fitted to KH-101, Iskander-M, Sizzler, P-800, kh-55, even kalibr. They are enough to completely destroy enemy airbases and military bases entirely with very little radioactive fallout,

Small yield nukes on every UKROP airbase/army base would be a game changer. DO IT :) Ukrops will throw the biggest fit of rage.

You should change your name to insanity.

Russia will not use nukes, as it has repeatedly stated. The only folks that talk about nukes are nato clowns and armchair idiot generals. Wich are you?

Russia will use nuclear weapons, but it will be against America, England and Israel if they do not stop with their destructive plans for world domination.

The Hollow Man in the empty suit in Pentacon occupied Berlin and his retard watermelon commie gubermint will suffer the same fate as the Trussed dummy just did on Pirate Rock. Anyone that imagines that Germanistan is not a willing helper of the evil angloZionaZi empire of shit still doesn’t understand the juice bankster Onkel Adolf caper. Russia needs to finish the Great Patriotic War conclusively albeit 75 years too late and if the Germanistan regime insists on going down for a third time in a little more than a century for its juice masters then so be it.

Onward march to Berlin again and the evil sewer in Brussels, Natostan until the Euro Peon oligarchs are destroyed.

americunt needs to let in more filthy jews so they can heat them (gas them), and russia needs more commies so they can be gassed also.

Germany is doing fine, and will be determined to burn the communist manifesto as Fascistly as possible.

jews and commies are so full of lies, that they are schizo.

There are no signs of European energy system collapsing as pro Russia folks are fantasizing. In fact all energy prices are going down. October has been disappointment for Russia.

This is RuZZian bullshit propaganda…so take this TRASH and shove it up your FUCKING ASS!!!! The only one suffering severely here is this third-class mafia-ruled shithole country formerly known as RF!!!!