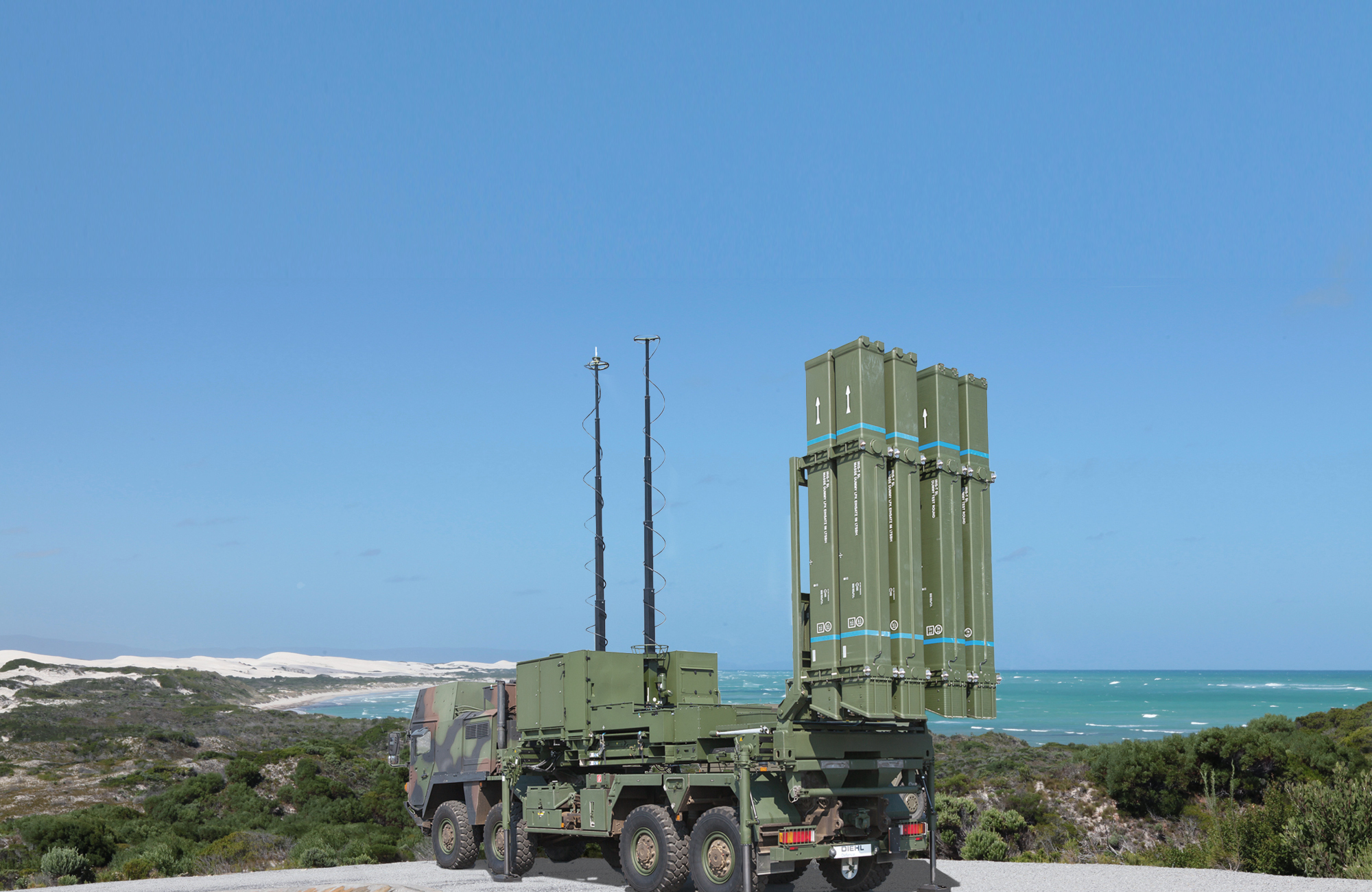 According to the German news outlet, the German cabinet’s security council is discussing the matter. IRIS-T SLM systems, made by German weapons maker Diehl Defense, could be deployed in Ukraine from November if the decision was taken.

The IRIS-T SLM system can engage aerial targets up to 40 kilometers away at altitudes of up to more than 19 kilometers. The system’s main armament, the IRIS-T SL missile, is first directed towards its target via a datalink. Once in close proximity, the missile locks on the target with its imaging infrared seeker.

The system features a TRML-4D surveillance and target acquisition radar made by Germany’s Hensoldt. The radar is equipped an AESA [Active Electronically Scanned Array] sensor with a maximum range of 250 kilometers and the ability to track up to 1,500 targets at the same time.

Ukraine is interested in receiving ten IRIS-T SLM systems, which could be manufactured over the next three to four years. Training Ukrainian service members on the systems could start as soon as the German government has approved the plan.

Some of the downsides of the IRIS-T SLM air-defense system are its limited range and its infrared-based guidance system which makes it vulnerable to some extant to active counter-measures like flares.

The plan to supply Ukraine with IRIS-T SLM air-defense systems does not appear to be beneficial due to the long time Diehl Defense will take to manufacture the systems. Even if some systems were quickly manufactured and supplied, they will not likely present any new capability. Kiev forces are already using medium-range air-defense systems like the Soviet-made Buk-M1 with little success.

40km range is not really that long

Don’t tell the gringos that.

I rarely tweet about US politics but I just want to say how happy I am that Biden is POTUS. The country is United, the economy couldn’t be better, the stock market is roaring, the cost of living is down and foreign affairs are going great. I can see why people voted for him 😜

It’s similar to older BUK systems, except that they don’t know how to use it.

3 to 4 years to supply lol. ukraine wint exist by then

So make sure the ukraine pay a big downpayment. front. If the subsequent cheques bounce the NATO can send in the international misery fund with a structural adjustment package.

Germany is trying to maintain its egemony in the European continent by propping up Ukraine. They think it’s easier to maintain the egemony by antagonizing Russia than letting down the Anglo speaking imperialists. It’s a misconception. I always said, after Russia, it’s Germany the first NATO Target that needs to be contained, militarily and thus politically and economically. In addition, and unsurprisingly, Germans have a long history of making major political mistakes that ultimately directly hurt their population. Hello from Spain.

yo666
Reply to  Torquemada

Germany is not free in its decissions, but has to follow US. It is still occupied, and not a souveraine state.

Very true. I try to think of a way we could end this situation, but haven’t managed to come up with an idea. :(

Germany is now awash in migrants that have no respect for that country, between Germany and Sweden I would like to open a pool to see which country turns into a third world shithole first.

global air defense system of ukraine have been taken out from day one, this is useless.

They’ll be good for shooting down a few Orlans but thats about it.

Those missiles are more expensive that Orlans. It would be cheaper to give Russians money and ask them to destoy drones with hammers.

November!!!!! Look I know NATO is setting up for a long war, However, by November, all of Dombas will be liberated and Ukraine won’t have a sea border anymore. On top of that Russia will be able to carry on projecting an effective air defence umbrella from within its own territory. On top of that Ukraine will still have little answer to cruise and hypersonic offerings presented by Russia, and the presence of any of these systems around ‘assets’ will more act as a beacon ‘strike here please’ rather than a defence. Russia will be winding back to drones and missiles by then and these systems will not affect the outcome of that much!

IRIS-T seeker is not like old IR seekers it can differentiate flares from an aircraft.

But what is the kill rate if no aircraft are flying! What will be the Kill rate against it, when it is spotted and detected! It’s taking a knife to a gunfight. That is the reality of war, circumstances change and evolve. What you need do in a defensive posture can be very different from an attacking posture. The attrition rate can be huge if defenses are sound! By November Russia will be in a defensive posture!

Iskander does not care or differentiate. Iskander is equal opportunity destroyer.

Thank’s to Putin Russia has now become the global Punching Ball off every arms dealer of the Planet. Want to test a new weapon send to ukraine to kill russian soldiers it’s it perfectly safe cause nothing will ever happen. It’s hard to have sympathie for such cowards.

Saying that, when every armed services in the world goes through enormous efforts to get weapons they would possibly face, so they can evaluate them – and yes even using them against themselves in doing that.. In this case the West is bringing them and laying them on the table for free – Sheer Putin Brilliance. You don’t get strong pretending, you get strong facing and overcoming the reality of adversaries weapons and systems. That is what hardens you and makes you better. The only sin or mistake in War is losing. Battles are lost and won, it’s winning the war that counts!

This is just light training for Russian Military. Sort of like military vaccine. After few months it will have expirience dealing with all toys NATO have.

Javelin is a dud apparently.

These piecemeal deliveries to the orcrainians are only helping Russia in the future. It will have little impact on the outcome and cause very little delays.

Once they engage and ideally capture one, then Russia will fully know all the secrets of ZATO.

Very good. There is more to come to defend Ukraine against Mordors Orchs.

I guess germany wants russia to have the semi-latest german technolgy.

Complex systems like this take ages to learn and operate. Unless German tech crews are going to be on the front lines then this system is useless

Germany has been converted into a puppet regime of the U.S. From German friends I know that if you dare to say anything against the current sycophantic deutsche Regierungsform, you risk imprisonment.

Yes the German gulags are full of russians.. and russian kids get harrassed all the time.

It is worse than during Nazi times, totalitarian dictatoship all the way.

Germany under it’s new CIA regime govt is violating it’s terms of surrender in 1945 to the Soviet Union.

So after they finish the gas pipelines, Germany puts a knife in the back of Russia. It’s a disgrace and I hope the Russians shut their gas off.

It would be a shame for some German shipping to go to the bottom of the ocean sometime soon.

Russia itself is quite protective of state secrets and doesn’t just throw examples of all its weapons into the battlefield to be captured or tested by the opponent. NATO just seems to be throwing everything in. The UK brags about starstreak being so advanced, but seems to notice no problem with it just being captured and then reverse engineered in Russia and China, then finding its way to the Syrian military or Hezbollah.

Still some more greasy palms to be lined with silver first.

40km range eh…even if it was 100km, the batteries will still be sitting ducks for cruise missiles which have ranges of 2000+ km’s. LOL

If only Ivan could produce any… flathead monkeys are unable to do so…no plane, Car, Tank,missle production left

Sounds like a nice target for a russian anti radiation missile launched nicely from outside a 100 km standoff distance.

Time to nuke Germany and level them once for good. Nazis never change.

Poor Russians, they are losing everything. Even the Donbas and the Krim are soon going to be taken back by the Ukrainians ^^

This is no more, no less, Germany playing it’s part in the show, trying to make up to elinsky for the affront by elinsky. Funny, huh? Elinsky craps on the Germans and they apologize. I almost think this is a German joke on elinsky, 3-4 years…lol. Elinsky will be in hiding or pushing up daisys by then. In reality, this is just the west clearing out their shelves for the new wonderweapons they need to confront Russia. The primary necessity of the west right now is more MIC spending. This keeps the chimps in power and handing out candy to the gov reps, whose only interest is grift. With the usual delivery after design time in the US, we should have comparable weapons in around 5-6 years (likely longer)…if they put a rush on it. Of course by then the Russians will likely have new designed systems themselves, material will be scarce, Ukraine won’t exist in any recognizable form, NATO will be a shell, EU will be on it’s knees, the US will be on life support and the rest of the world will have moved on. If this system were worth anything, the Israelis would already have them. As bad as the Israeli and US AD systems are, how bad is this if Israel doesn’t have it?

They have to OBEY their Masters you know.