Unprepared neither for “hybrid” nor real war, Germany is trying to balance and avoid a confrontation between Russia and Turkey, even at the cost of betraying of the Kurds, and European values 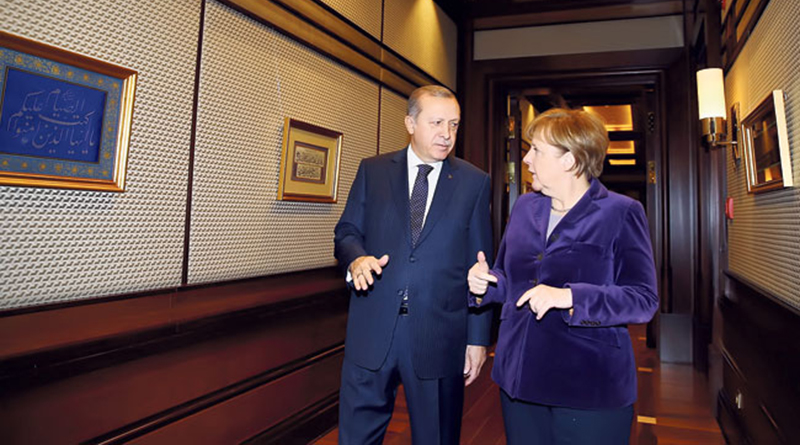 United States stands ready “if it be necessary, to fight and to win” against Russia in Europe, that was said few days ago by General Philip Breedlove, the head of the US military command in Europe, in front of committee of the US House of Representatives. At a time when Washington and Moscow, as well as during the Cold War, decide when guns will fall silent and when will “speak up” in other countries (this time in Syria), a statement of General Breedlove is not bringing tranquility on European soil, despite his assurances that America does not want to wage war. Not less reassuring is the fact that NATO experts published a report stating that European members of the alliance “can not wage war against Russia,” because they have the problems like “lack of finance” and “critical deficiencies in military actions.”

Even the strongest European economy has no reason for somewhat more peaceful sleep, because, as experts of the Alliance say, Germany has only ten usable “Tiger” helicopters. However, this is just a small example of how the Bundeswehr represents weak military force, since the military budget is cutting costs for years, Germany last year allocated only 1.16 per cent of GDP for defense, although her commitment, as a member NATO stands almost twice as much.

A country that once did not hesitated to join the two world wars, now, at a time when the international scene has a kind of dress rehearsal for the third world war, is completely unprepared for that kind of conflict. Moreover, faced with the enormous pressure of the refugee crisis and the alarming disunity among members of the European Union, the official Berlin is trying to balance its stance in the Syrian crisis and avoid a confrontation between Russia and Turkey, while simultaneously defends itself against a “hybrid war” for which accuses Moscow.

Just a year ago, German Chancellor Angela Merkel was consideration as the most deserving for the Minsk Agreement, which is intended to lead to a peaceful resolution of the Ukrainian crisis. Today, however, the uncrowned queen of Europe, using diplomatic persistence, fails to persuade its European partners to follow her, so it is forced to swallow the bitter compromises, in order not only to preserve its chancellor’s chair, but also Germany and Europe for rejecting the EU acquis and entering into some new war.

When she allowed in September for thousands of refugees from the Middle East, barricaded by the Hungarian authorities at the railway station in Budapest, to come to Germany and seek asylum, Merkel has become a kind of “refugee mother”. Analysts say that she wanted to give Germany a friendly, human face, especially after the harsh conditions of the July negotiations for a new financial aid package to Greece, after which Germany is viewed simply as an unscrupulous hegemon. Friendly and human face of Germany lasted a few weeks, to become, as described by German commentators, a grimace under the influence of islamophobic marches of PEGIDA movements and far-right party Alternative for Germany, which is growing in popularity.

According to the chancellor coalition partners, but also severe critic, Bavarian Prime Minister Horst Seehofer, for politicians is particularly problematic when the initial mistake justify political philosophy. As he says, when it comes to Merkel, that mistake was her idea of a welcoming culture for refugees, where he adds that he does not think Merkel consciously risked hers political position.

“She is in the years when person is not giving up power voluntarily. She maybe sometimes cooks for her husband, but politics is her life, “says Seehofer, believing that Merkel is able to correct what he considered a mistake.
However, in this chess game Merkel was forced to Daman gambit, which will have more than one figure to sacrifice with a specific purpose. When last autumn, Russia decided to start resolving the Syrian crisis, by diplomatic and military means, Merkel and her government welcomed the decision, contrasting with the prevailing opinion in the West that nothing good can come from Russian President Vladimir Putin. Merkel herself detested from becoming a “war Chancellor”, but terrorist attacks in Paris forced her to sympathize with France and to send the Bundeswehr forces to help in the bombing of the positions of the Islamic State. A few months later, Merkel in Ankara was “shocked at the suffering of tens of thousands of people who are exposed to bombing attacks, as well as the Russian bombing.”

In an apparent desire to persuade Turkish Prime Minister Recep Tayyip Erdogan to agree on helping the EU in stopping refugee wave in exchange for billions of euros, Merkel is ready for gambit in which not only she will sacrifice one pawn, but much more chess pieces. One of chess pieces are Kurds, Germany is arming and giving military training to them, considering them the most vital force in Syria for the fight against the jihadists. Another victim are the European values, since EU is promising billions to Turky, visa-free regime and progress in the negotiations on membership, although in Turkish prisons are full journalists and all those who dare to speak out against the government, which is increasingly autocratic. The third victim are the relations with Russia, which got better in the second half of 2015, and even Vice Chancellor Sigmar Gabriel advocated easing, if not the elimination of EU sanctions against Russia.

However, a sharper tone toward Moscow should perhaps not be surprising. On the one hand, that formally gives support to Turkey as an ally in NATO, even though Turkey has indirectly been told to not expect the Alliance to defend it, if there is a conflict with Russia. The influential political magazine “Der Spiegel” conveys the words of a German diplomat that “we will not pay the price of war that the Turks start.” On the other hand, “Der Spiegel” writes that Merkel’s team believes that Putin deliberately caused a new wave of refugees to divide Europe and weaken Merkel’s position. Although Putin himself recently pointed out that it “might be good to remember that the so-called refugee crisis began long before Russia launched a counter-terrorist operation in Syria”, German diplomats and the media, accuse Moscow of conducting a “hybrid war” against Berlin, by supporting German right-wing using accusations that the German authorities’ “paint the reality” when it comes to refugees.

At the same time, her Cabinet points to Putin’s “hybrid war” against Turkey, after the shooting down of the Russian plane. That is why Merkel is additional cautious, because she does not want the conflict between Erdogan and Putin, since she knows very well that none of them is the epitome of poise, and that the conflict between the two countries would have devastating consequences for the whole world. To make matters worse for her, her unenviable position is obvious to Erdogan and Putin , and so far they do not make her job much easier.

Breedhate is glorified welfare queen that will scury off to his bunker while his little toy soldiers get vaporised.