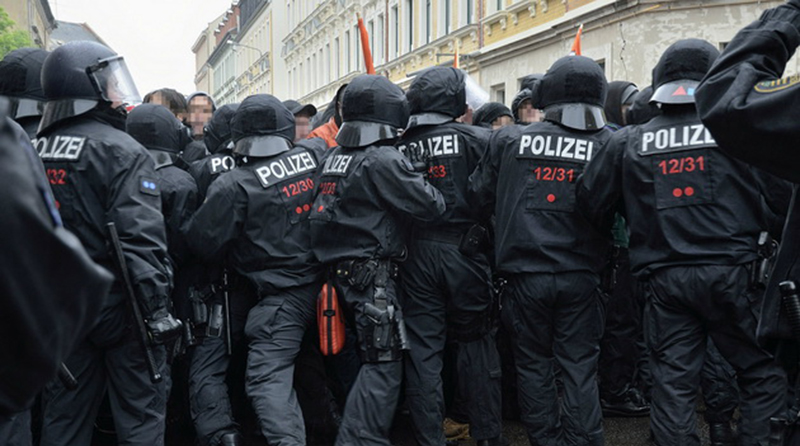 Originally apeared at Fsksrb, translated by A. Đurić exclusively for SouthFront

In Germany they quite often avoid even the jubilee celebrations. In character of stingy Germans they do not even have redundant costs, and anyway, not every anniversary deserves to be celebrated. Let us take, for example, the Bundeswehr, who in 2015 turned 60 years old. And why they did not celebrate? Because there is no reason: in reality they would celebrate anniversary of entry of Germany in NATO, where the German generals were set for pawns in the game led by the American masters. Formally Bundeswehr until now does not own General Staff: unlike other armies – in this alliance member, the highest organ of the Bundeswehr military planning from the very beginning is considered to be the Supreme apartment (headquarters) of NATO (SHAPE).

And here’s what the German press should not be silent about: the consent of Berlin to renew US nuclear weapons base in Germany – the consent is given in a whisper, without undulations of journalists, just in time for the 60th anniversary of the Armed Forces of Germany. From memories of Angela Merkel, who gave hers consent, obviously completely evaporated memories that in 2010 Bundestag voted for the removal of nuclear weapons from the territory of Germany. So Angela Merkel will be remembered in history not as the chancellor who was able to fight for nuclear disarmament, but rather as heiress of Franz Josef Strauss – politicians who much louder than others fought for accommodation of American nuclear missiles in Germany. After all, Strauss who in the period 1956 – 1962 was the defense minister of West Germany, called himself “the drummers of the Cold War.” Merkel has a different style, but the result is the same: the German taxpayers will be paying out of their pockets for American military bases on the territory of Germany.

Slow Merkel has already surpass Strauss after someone counts: he has not managed to become the then Chancellor of West Germany, but even as the head of Bavaria he spend less time on that position than Merkel at the helm of Germany. Only Helmut Kohl and Konrad Adenauer guided Germany for longer. According to modern standards Merkel is long term political. At the “European Olympus”, since she started to represent Germany, in all countries of the European Union several leaders were changed, somewhere (for example – in the Netherlands, Estonia, Lithuania), two in other three (UK, France, Spain, Portugal) and even five (Italy and Poland) and six (troubled Greece and the Czech Republic). All in all – as far as the lack of interchangeability – Merkel is heading towards breaking the record in Europe.

Today, any discussion about the more than ten years long power of Angela Merkel as Federal Chancellor is covered by crisis with migrants, whose sharpness many Germans associate with the personal position of the Federal Chancellor. The first female Chancellor of Germany runs the risk of entering into history as a politician who is responsible for the disappearance of the national state. The show that Germany is in safe hands, which was formed during the global financial crisis, is sinking into the waves of migration crisis.

The internal political situation in the country is shaky as never before. This is also visible in a harsh reaction from the German political class about words of Sergei Lavrov regarding the ambiguous story about the disappearance of 13-year-old inhabitant of Berlin with Russian-speaking ancestry. Statement of Frank-Walter Steinmeier, who urged that the situation should not be politicized, still can be called diplomatic, but the second-class party workers overcome themselves because they blamed the Russian minister for interfering in the internal affairs of Germany, and Russia to sponsor the right-wing movement throughout Europe.

Right-wing is becoming increasingly popular? Blame Russia. The protest demonstration was organized by the municipality where some people speak Russian? Russia is to blame! Any European who caches himself in a conspiratorial thoughts (“Perhaps that his wife and daughter should buy a pepper-spray for self-defense?”),should ask himself: “Am I getting under the influence of Putin’s propaganda)! And in fact: for us migrants are really a necessary influx of fresh blood! “

Eh, something is going not so well in the German state. Politicians do not allow even the thought that, rebelling against the government’s course, people are able for political self-organization. Or: it is allowed to protest against what you want (for example, work against nuclear power or against the construction of wind turbines), but not against the policy that destroys the way in which Germans live. In 2011, after the mass demonstrations that occurred due to the accident at the nuclear power plant, which is located at the opposite end of Germany, Angela Merkel announced a moratorium on the work of the seven oldest nuclear power plants. She reacted quickly. But if someone declares himself in favor of restrictions (not prohibition!) of migration, he is a risk: it will immediately be labeled as right-radicals and nationalists.

Today, the threat of the radical right-wing expands like a balloon in Germany. In the camp of untouchable right-wing radicals they groundlessly classify all participants a demonstration movement PEGIDA. Even sympathizing party “Alternative for Germany” (AFD) is shown as a sin. “Fine” politicians, such as those from the parliamentary parties, often refuse to participate in discussions with representatives of the “Alternative” – a new conservative-eurosceptics party, which was formed three years ago. The feeling that political opponents have no arguments in disputes with AfD grows stronger.

And when there are not enough arguments, they use means that were previously deem unworthy in a European democracy. Monitoring, prohibitions, penalties … Minister of Justice, Hajko Mas, considers that judicial bodies have not only the right to use power to search for people who have put to torch residence of migrants, but also to follow the participants of peaceful demonstrations held under “harmful” slogan, and to monitor expression of right-wing mood on the internet (!).

There is a point where the Minister of Justice Mas said that stances of authoritative jurists, who criticized Merkel’s government migration policy as contradictory to the Constitution of Germany, are “preliminary arson”.  This is an allusion of a former member of the Constitutional Court U. di Fabio who has submitted a report that in this situation the government is required to close the border. A Bavarian Prime Minister Horst Seehofer has publicly stated that it is possible to start court trials. Sociologists, who do not leave jobs waiting, conducted a survey which turned out to be 48% of Germans and 65% of Bavarians believes that such an investigation is in order; even among supporters of HDS / HSS every third would have thought that such a complaint is justified. It is interesting that Hajko Mas prepares to influence the direction of thinking of these people. But how to proceed with those who believe that the government should immediately resign? According to the survey, every seventh German believes that, and every day there is more and more of them. Or maybe all of them are touched by the hand of Moscow?

The indigenous people were conquered. No one even argues this fact. Their is a new legal movement led by a Think Tank that is standing up for what is right for a change. http://indigenouseuropeans.org/