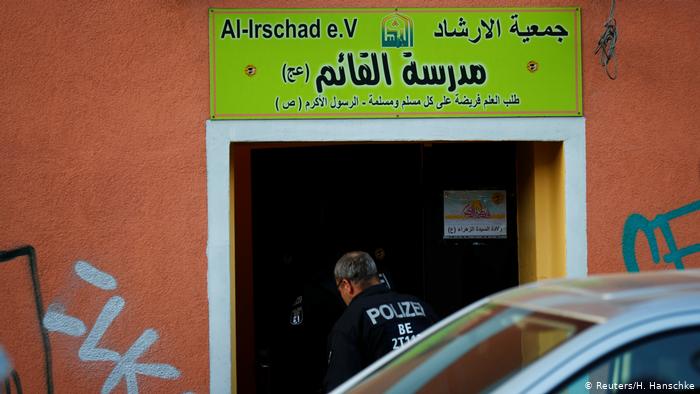 He also confirmed that “police measures are underway in several federal states concurrently,” and added that even in times of crisis, the “rule of law is able to act.”

The police carried out raids on four mosque associations in Berlin, Dortmund, Bremen and Münster accused of belonging to Hezbollah.

Hezbollah was also classified as a terrorist organization.

The American Jewish Committee praised Germany’s move to ban Hezbollah, calling it a “welcome, much-anticipated and significant German decision” in a statement.

“We now hope other European nations will take a close look at Germany’s decision and reach the same conclusion about the true nature of Hezbollah,” wrote AJC CEO David Harris. “Permitting its [Hezbollah’s] ‘political’ wing to operate on European soil allows for active recruitment, fundraising, and the poisonous spread of anti-Semitism,” the statement read.

“This is a welcome, much-anticipated, and significant German decision… We now hope other EU nations will take a close look at Germany’s decision and reach the same conclusion about the true nature of Hezbollah.”

“In my conversations with [German Foreign Minister] Heiko Maas, he promised to help and I thank him,” Katz tweeted. “Hezbollah is a terrorist organization & must be treated as such.”

On a trip to Berlin in 2019, U.S. Secretary of State Mike Pompeo said he hoped Germany would follow Britain in banning Hezbollah. Britain introduced legislation in February 2019 that classified Hezbollah as a terrorist organisation.

German authorities estimate around 1,050 people in Germany are active members of Hezbollah, but not specifically of the armed wing.

In September, federal prosecutors were given the authority to open criminal cases against members of any foreign terror organization.

In 2013, EU foreign ministers banned Hezbollah’s military wing but not its political work in Europe. As a result, sanctions can be imposed on its military leaders.

Germany simply designated it as a terrorist organization to stop the possibility of its political members carrying out any activity in the country.

Germany is an occupied country, it is part of NATO: the largest terrorist organization in the world, so why could it seriously say who is terrorist and who is not?

It seemes Your head is occupied or gone. We have to have Our oppinion.

PKK probatly is fine for You too.

Its not occupied, NATO doesnt occupy member states, I think you are confused with Russia

German faggot cunts are occupied by Americunts, so no big deal. Zero relevance in real terms and only endanger the German faggots traveling overseas.

Faggots are the best in the world. They are good taxpayers and make no children.

Surely you are a proud member of LGTB

And they control the Americunts!

Good decision, I hope the EU will do the same.

I’m awaiting a fatwa against the fatwa* that is Merkel.

Germany is not an independent nation, it is occupied by the Americunt rapists since 1945.

Indeed. Germany is another US poodle!

Well, maybe because for Germans those brave French revolution people from WW2 were terrorists :D

You can not label people as terrorist, that’s foundation of Western law and culture.

What about other muslim terrorist organizations like DITIB for example?!…

As long as USA sides with the muslim sunni terror groups and at the same time demonizes/fighting the muslim shiite terror groups, we can’t talk real anti-terrorism meassures…whatever US interests are, its puppet states will follow them blindly

Germany is and will always remain Zionist slave state nothing new . infect all of EU are cowards and soon will leek the feet of Zionist . Hezbollah will prevail . ressitance doesn’t need UN or EU.