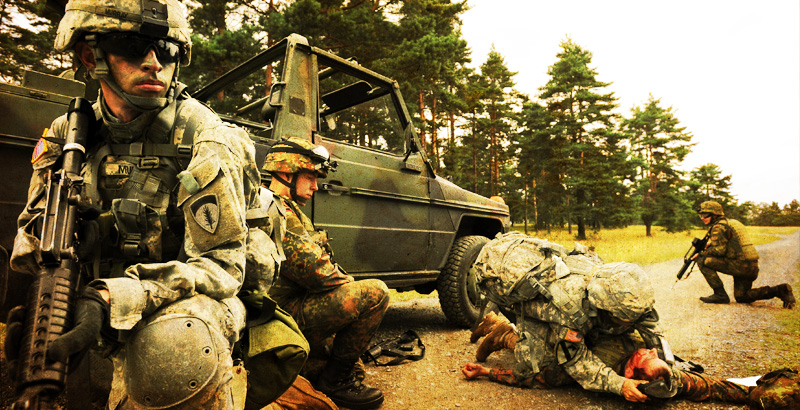 Germany and France are pressing ahead for the creation of an EU army. The chances are good after Britain has left: London had always blocked the idea, to prevent an independent unit alongside NATO. Substantial synergy effects for national budgets are speaking for the concentration of forces.

In response to Britain’s exit from the EU, Germany and France want to promote the cooperation in the field of defense of the remaining 27 EU member states. In the final version of the paper from the two defense ministries, which was available to Reuters on Monday, both are eager to stimulate a common EU policy. It calls for example for a common and permanent EU military headquarter and a joint satellite reconnaissance.

The EU had launched the Franco-German proposals already some time ago themself. In a strategy paper of operating think tanks EPSC, located around EU President Jean-Claude Juncker, it states:

“If we have to achieve more with less money, a gradual integration of defense is our best – and only – option. President Jean-Claude Juncker had urged during the European election campaign for a strengthening of Europe in security and defense issues. In July 2014, at the European Parliament, he presented political guidelines and pointed out that “even the strongest soft power can’t exist in the long term without a minimum level of integrated defense capabilities”, and as the next steps in the integration of military capabilities, more synergies in the procurement for defense industry products and permanent structured cooperation. His emphatic plea for a European army as a long-term project of the member states which are ready for it has sparked a much needed debate. “

The proposals are the base of the Summit of EU-27 leaders in Bratislava on Friday. There should be debated such things as how the Union wants to work without the United Kingdom. “The defense of the European countries, to protect EU citizens and the credibility of the European Union as a whole is of great importance,” it says in the paper of Defense Minister Ursula von der Leyen and her French colleague Jean-Yves Le Drian.

Germany, France and Italy had called already shortly after the British referendum on membership of the European Union; the EU should strengthen their cooperation in the internal and external security, in economic policy and in the fight against youth unemployment. The interior ministers of Germany and France had submitted joint proposals before the Ministry of Defense did. The defense minister now emphasized that without Britain a common European security and defense policy should be started. The government in London had hold up a closer cooperation for years – also with regards to a possible competition with NATO. It should be clarified by December which EU states are wishing to join the Franco-German initiative.

In the Franco-German paper it is proposed that the European countries should work together in procurement and logistics, as well as to synchronize their policies in matters of financing and military planning. It also proposes a joint EU medical and logistics command. New is the idea of ​​a European military academy or European courses at national schools. Industrial cooperation in the military sector is to be expanded. Both countries advocate forming new partnerships with African countries.

In recent days, countries like Hungary or the Czech Republic have already called for a common European army. Foreign Minister Frank-Walter Steinmeier wants to consult on Tuesday in Riga with his three Baltic counterparts. According to a Foreign Ministry spokesman this will be also about the question, on how one can work militarily more closely together.