The history of the Alternative for Germany (AfD) began in the election year 2013, when the party was founded as an association of euro critics, economic liberals and conservatives in values ​​who disagreed with the policies of the association of the Christian Democratic Union (CDU) and Christian Social Union (CSU) under their Chancellor Angela Merkel and with her turn away from conservatism. Initially ridiculed by these parties, later demonized as a threat to the allegedly conservative government, it only narrowly missed entry into the Bundestag in its founding year with 4.7% of the vote, despite the propaganda fire of practically all system parties from the political right to the left.

Already with its name the party made it clear that it did not consider the government’s policy to be without alternative – to use a running-gag-turned phrase coined by Chancellor Angela Merkel. In the following years the initial lack of concept of a party that defined itself only through opposition, specifically personified in the then Chancellor Angela Merkel, gave way to an overall concept in which conservative and nationalist values ​​set the tone. In a country like Germany, this has become a unique selling point for a democratically oriented party that isn’t embracing right-wing extremism.

In the political trench warfare of course, the AfD is referred to, not only from the left, as far-right, sometimes even as fascist. Fascism, however, is attacking violence, it is the violent fight against other views. But it is not the AfD that has its political opponents monitored by the Office for the Protection of the Constitution, and it is not the AfD that opposes demonstrations by political opponents or sabotages their election campaigns. The fact is, however, that instead the party itself is a victim of all those practices.

For example, a so-called artist collective was recently exposed, which had sneaked into the AfD as an alleged advertising company before the Bundestag elections and withheld large amounts of election advertising material, which this company was commissioned to distribute. This action ran through five federal states, Lower Saxony, Berlin, Hesse, Baden-Württemberg and Rhineland-Palatinate.

This interference in the elections, which is almost unprecedented in the history of the Federal Republic of Germany, only triggered a shrug of the shoulders in the mainstream media, while the alleged interference by arch villain Russia was widely reported, yet without any evidence. Of course, despite such proven interventions in the free formation of opinion, the federal elections are not described as unfair and unfree, also in stark contrast to the parliamentary elections in Russia that were held just weeks before.

The German domestic intelligence service, the Federal Office for the Protection of the Constitution, classifies the AfD as suspected right-wing extremist. Some federal state branches of the party are now also rated in this way. The aim of the intelligence service, which is largely controlled by representatives of the parties so far involved in the federal government, is not to collect information about secret machinations, which would correspond to the official task to protect the constitution. After all, that would be difficult, since the AfD is very open about its policies. Instead, the aim is rather to intimidate potential voters with the threat that the party could be declared illegal and then a citizen with any connection to it would get into trouble.

However, this scare tactics proved to be not very successful, on the contrary. The refugee crisis in 2015, when the government under Angela Merkel took in hundreds of thousands of refugees and thus brought the German cities and municipalities to the brink of collapse, turned the small protest party AfD, which like other such parties after initial successes was thought to disappear again soon, into a political force that could no longer be ignored. This was still true in the 2021 federal elections.

The AfD has long since lost its status as a protest party, at least in the eastern German federal states. In states such as Thuringia and Saxony, it was almost state-wide the strongest force in the federal elections in 2021, in other federal states it came in second only by a slim margin.

For this, East Germany is often denigrated by the leading parties as Dark Germany and its citizens are sometimes even stigmatized as socialized by totalitarianism because of the late GDR, although most East Germans were still children as the GDR ceased to exist or were even born afterwards.

There, in the part of the country that was treated like a colony by the West and is still treated like that sometimes, the AfD is now considered by many to be the only major political force that listens to ordinary people and takes care of their problems. When it comes to jobs, public security, price increases and political ineptitude, or a perceived or actual foreign transformation of German culture, many people do not care which ideology allegedly or actually a party follows as long as it actually deals with the problems of everyday life.

The topics on the agenda of the AfD are diverse, but undoubtedly the policy on immigration plays a major role. Whether the AfD is nationalistic or patriotic is up for discussion, as is the evaluation of these political directions. A fact is, however, that many people, not only in East Germany, are angry when state money is available for alleged refugees, but not for the solution of many of the social problems of the locals. In addition, most of these people are proven not to be political refugees, but are simply illegal immigrants who abuse German laws, tolerated by an incompetent bureaucratic judiciary and a cowardly government.

It also frightens many that even the central districts of small towns are now dominated by foreigners, that the misogynistic Islamic clothing becomes dominant there, that more and more shops carry Arabic instead of German advertising and more and more pubs appear for purely male, purely Islamic customers.

The new presence of foreigners in the East German central districts goes far beyond the nominal proportion of foreigners, which is explained by the culture of these people who in their free time gather in the central districts. This raises concerns that there could be ghettoization in East Germany as well, as it happened in Berlin or the Ruhr area, with all the negative consequences for Germans, but also for citizens with foreign roots themselves.

Even on the question of how to deal with the alleged pandemic, after initial disorientation, the AfD quickly found itself in a position critical of the government. Of the parties represented in the Bundestag, it was the only one that clearly opposed the restriction of the citizens’ constitutional freedoms. But again, here too, although it stood up for freedom, it had to let itself be insulted as far-right, by the very parties that attacked civil liberties in a fascist manner or showed solidarity with these attacks.

Of course, there is no question that the AfD is on the right of the political spectrum. It is also clear that, although they exercise legitimate criticism of Islam, their explicit support for Christianity is not an alternative for atheists and free spirits. Also, the deeply anti-communist Alternative for Germany is certainly no alternative at all for ideology-free communists who cannot find a political home in left-wing parties, including those who call themselves communist.

However, the people who have been betrayed by the established conservatives, the social democrats and the left cannot be blamed for turning to other parties such as the AfD. If the AfD is the only major party that publicly addresses certain grievances, whom else should they turn to?

Critics of the AfD, especially those from the left, see this party as a serious problem for the German party landscape, but fail to recognize that it is their own failure that drives voters to this party. The AfD is not the problem, but only a symptom of a problem, namely the crisis of the entire political system of prevailing manipulism. Only when the majority or at least an active minority of the people in Germany recognizes this problem, there will be a real alternative for Germany. The 2021 federal elections, however, showed once again that the road to get there will be a long one.

Not my comment, impersonator. Let’s get the spam cleaned up SF.

That lowlife Yuri who may have impersonated you in the comment field below other articles.

Thank You SF friends for cleaning up the comments. The AFD represent an obvious threat to the cdu/csu satanic imposters.

They are a true nationalist option to foreign backed degenerates like merkel who let in one million illegals from 2015 onwards.

merkel is a disgusting pig who should be jailed for life. A true traitor to the German people.

The AfD is openly pro-Zionist, you can find them stating their support for Israel online. 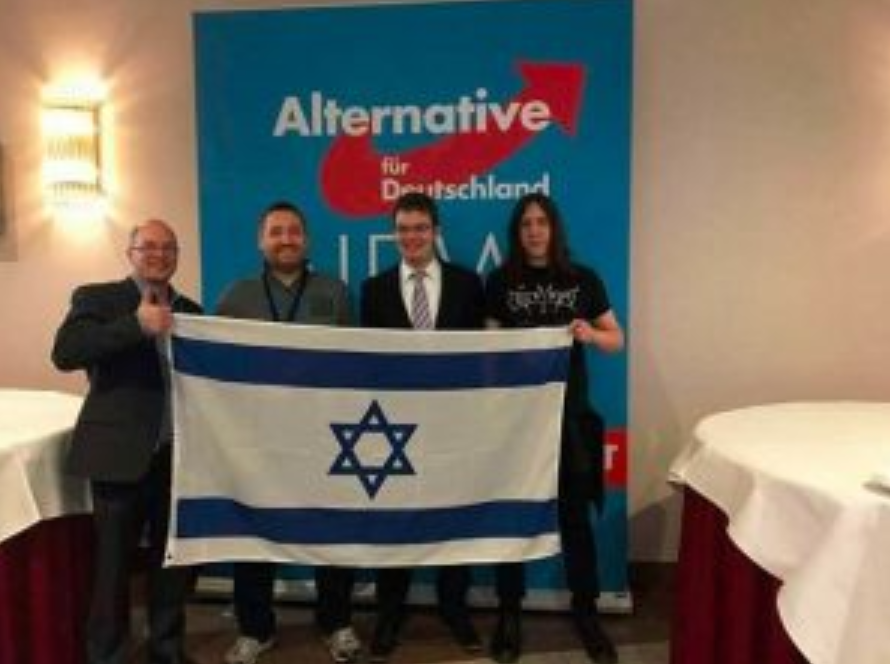 The fact you always scapegoat other whites to protect jews who aren’t white is a sign of low aptitude, or you are consciously lying.

You only believe what you are told by your masters, they a “demi gods” whose word is the “word of god”. No amount of evidence convinces you, after all they only have to take zionist propaganda about hitler being financed by wall street to convince you without hesitation. You take it at face value and refuse to consider anything different. You never try, you only follow the herd like a good goy.

As for the German people, you don’t have the right to speak. Your solution would not permit German nationalism to rise, you want to keep it neutered and submissive to your neo-bolshevik menace.

You think that because they lost a war, they are therefore at fault for being outnumbered. You believe in the WW2 legacy narrative that destroyed Europe’s sovereignty and placed it under globalist control, whose two main puppet states were the USA and the Soviet Union.