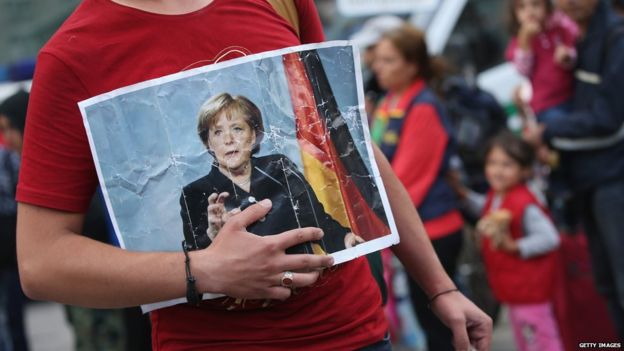 Berlin made mistakes with its “open-door” refugee policy, which “went off course” and saw hundreds of thousands of asylum seekers entering the country over the past two years, German Finance Minister Wolfgang Schaeuble admits.

The German government is currently trying “to improve what went off course in 2015,” Schaeuble told Die Welt’s Sunday edition in an interview. “We politicians are human beings and we also make mistakes, but one can at least learn from them,” he maintained.

On Friday, Handelsblatt cited a Finance Ministry report that shows Germany spent €21.7 billion ($23.3 billion) on tackling the refugee crisis in 2016. Most of the money went to German states and municipalities, which received €9.3 billion last year, while measures to integrate refugees received €2.1 billion in funding.

The straightforward statement comes on the heels of the severe refugee crisis that struck Germany in 2015. According to recent government figures, the country took in hundreds of thousands of asylum seekers, many of whom arrived through the infamous ‘Balkan route’ stretching from Turkey’s Aegean shores to central Europe.

From 2015 on, Chancellor Angela Merkel’s government maintained what is now known as an “open-door” policy, despite an avalanche of criticism from the public. Last year, some members of Merkel’s cabinet began challenging the policy, with some suggesting a more selective approach.

Later that year, the German government introduced a package of measures – otherwise known as “Asylum package II” (Asylpaket II) – which included putting limits on the number of asylum seekers admitted to the country and a roadmap for integrating those already in Germany.

Germany subsequently broadened the list of the so-called “safe” third countries in order to accelerate the deportation of failed asylum applicants.

Schaeuble himself has made some contradictory statements on the refugee crisis in a number of opinion pieces published in German media. Last June, he argued that closing European borders to migrants “would lead us towards degenerating into inbreeding,” telling Die Welt that German Muslims have always been “an enrichment of our openness and our diversity.”

While ambiguous and controversial, his statement called for more pragmatic economic engagement with the Middle East and North Africa – the regions that most refugees come from. “One thing is quite clear for the future – we have to invest more in Iraq, Syria, and Libya, and then we will have to pay for sub-Saharan Africa’s development,” Schaeuble said.

However, he wrote in an October article for Die Welt that “the growing number of Muslims in our country today is a challenge for the open-mindedness of mainstream society.” Addressing the role of Islam in society, a hot issue in Germany, he vowed to create a “German Islam” compatible with the values of liberal democracy and pluralism.

According to Eurostat, the EU’s statistics agency, Germany processed around 420,000 asylum requests between January and September of 2016 – more than the other 27 EU countries combined. The exact figure for the number of requests vary, however, with Eurostat putting the number at 612,000, while Germany’s Federal Interior Ministry claims it is 658,000.

Regret all you like your open borders, but it was not an administrative mistake. The invitation was there to draw as many fighting age males away from Syria’s vicinity to be “lost” in European cities where they are completely out of the fight for Syria. That is why it was an act of war against Syrian legitimate government and people. Lift sanctions against Syria and repatriate all willing men to Syrian Government areas and you will have done some good.

There never been open door policy. I’m russian citizen and I always needed to apply for visa, to pay visa fee (25E), to confirm my financial capabillity, to show bookings to embassy etc to enter EU.

What they did, they get much of cheap labor force. These crocodile tears about poor naive europeans are ridiculous.

There was open door policy for the migrants from the ME.My country allowed migrants to go to Western Europe,but the Serbs caught them on the border because they observed it unlike us and returned them to us.

When door is open only for some that’s not open door policy. Europe took young men from countries they butchered, now this cheap labor force works on europeans for food, and europeans complains that while EU makes billions on migrants labor, migrants caused some inconviniences to them.

The Left wanted them in because, so sad. The right didn’t mind letting them because it meant more people entering the job market so they could keep wages low. Otherwise with a shrinking population it meant wages would have to go up. Can’t have that happening! Perish the thought. As for cheap labor, who still needs that in this day and age with automatization destroying more and more jobs?

This has been an invasion of illegal immigrants seeking a better life, not refugees. Because you stop being a refugee the moment you leave your war torn country. When you move on after that, passing through countless safe countries to get to Western Europe, you’re not a refugee, you’re just an immigrant looking for a better life. I can’t fault them for that, but lets call it like it is. Because for legal immigrants different rules apply then for refugees and its not fair to legal immigrants, who do go to all hoops to legally qualify, to see millions bypass the queu just because they have a socalled sad story.

Even if Germany closes its borders the war is already lost. The demographics in Germany are past the tipping point, and now it’s just a matter of victory, by sperm warfare, for the Islamic forces. In 2 generations the Muslims will have out bred the Germans to the point of Germany becoming another caliphate.

The Germans could, at this point, still expel the invaders, but that would take courage, and will that Germans no longer posses.

Translation: We the governing CDU desperately need to turn our 2017 electoral prospects around – as voter punishment awaits us for Merkel’s surprise 2015-6 immigration policy – so we are throwing out some fake humility on issue, despite Merkel’s intransigence, in hopes of electoral salvation.