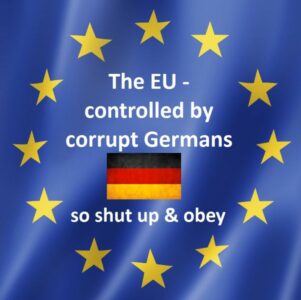 Two recent major news events, December 7 and 9 – the alleged German ‘coup attempt’ and then ‘arrests for EU Parliament bribery’ – are not what they seem.

As in the 1940s, German elites are ruining their own people … war against Russia again too … tho the current ‘Reich’ is neo-liberal corporations and money control led by Germans … corporations who seek new frontier ‘lebensraum’ in the East and Ukraine, and a hoped-for demolition of Russia itself.

“Race hatred against Russians … is motivating and propagandising war in Europe, as race hatred for Jews was”

December 7 there was a much-ballyhooed ‘German coup plot thwarted’ involving an eccentric aristocrat, Prince Heinrich XIII of Reuss. The ‘plot’ seems to be a stitch-up of German & Nato intelligence agencies, with the goal of demonising growing anti-war sentiment in Germany … now politically represented by the populist ‘Right’ such as the AfD party, the ‘Left’ now being ultra-pro-war against Russia, ‘because LGBT’.

3000 police officers conducted the raids … and found 3 guns. “German Federal Prosecutor says the group planned to recruit thousands, but had only managed to recruit eight people into its ‘military arm'”.

Suggesting that the ‘coup plan’ was make-believe, is that major German media knew in advance, with stories instantly ready to roll … if there was genuine ‘danger’ to German lives and govt, media would not be informed nationwide in advance of police action.

Prince Heinrich is said to be a harmless eccentric. His movement, the ‘Reichsbürgers’, claim that no German government since 1918 – not Weimar, not the Nazis, not the post-war Republic – is legitimate, because all were imposed, with no referendum. Reichsbürgers sought a national referendum vote to legitimise a new German government. No doubt some crude remarks were made by those involved … but credible reports suggest the ‘coup plan’ is a fabrication. LINK

“The Reichsbürger case, may now serve as another pretext to throw democracy out the window”

“It all seems completely exaggerated to us”, said Alexander Marquier, Cicero Magazine Editor-in-Chief 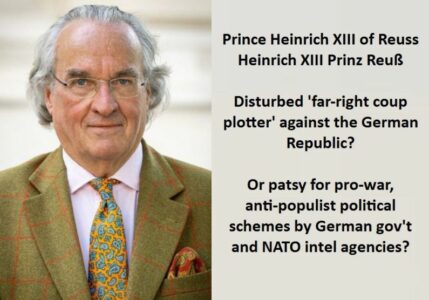 December 9 there was much-ballyhooed ‘arrest of EU Parliament members involved in bribery with Qatar’. This again seems a Nato & German intelligence agency project, with the goal of discrediting the EU Parliament and the many anti-war (also anti-vax etc) voices amongst its 705 members.

Although a majority there are pro-war, pro-establishment, there are also many dissidents giving speeches and posting tweets and videos with divergent views, against the war, against corruption, and more.

The EU Parliament is the ‘loose cannon’ in EU Institutions, the only part of the EU triad not under strict German control, compared to the EU Commission under authoritarian diktat by German Ursula Von der Leyen, and the EU Council of 27 national heads of government all subject to German bullying. EU Commission staff admit: ‘Germans run everything here.’

Bribery and influence-buying seem to take place all the time at the EU … one recalls leaked documents where Soros and his organisations boasted of having 226 EU Parliament members in Soros’ pocket: LINK

Yet it is only now that influence-buying at the EU Parliament is prosecuted amidst huge media storm, as with the raids in Germany two days earlier.

Brussels is the 2nd-most-spied-upon city in the world, after only New York with the United Nations. Obviously intel agencies knew for some time what Qatar and others were doing. Qatar a Gulf Arab Muslim nation, a ripe target for a Nato-&-German-led smear campaign against the Parliament itself. Ursula von der Leyen clucked over Parliament ‘ethics’ tho she has her own massively severe ‘ethics’ problems as below.

It seems Qatar visits were allowed to proceed for a time, and then suddenly BOOM the EU Parliament is discredited as the ‘place where the MEPs take huge bribes’ … Now, anti-war & anti-corrupton voices at the EU Parliament, are permanently tainted for years ahead. 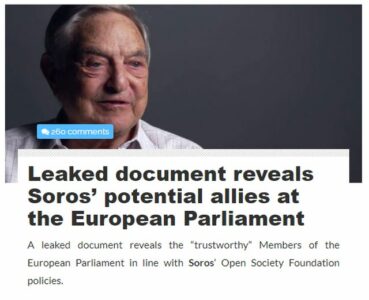 Although public outcry forced the announcement EU Prosecutor investigation for crimes involving Pfizer and covid vaccines, including ‘yes-my-husband-is-in-the-vaccine-business’ EU Commission President Ursula von der Leyen, those prosecutors seem to be going quite slowly … and seem quite reluctant to do anything against the German dictator-ess of the EU bureaucracy. LINK

It is suspected there is a chain of subcontracts from Pfizer down to the company of Ursula’s husband Heiko von der Leyen … or else that millions will flow to Heiko via this route, once Ursula leaves her EU top job in late 2024.

Crimes in EU Institution offices are under jurisdiction of Belgian government ministers … who control and restrict the Belgian police, and who in fact have already blocked the Belgian Federal Police from enquiry into crimes under Ursula’s vaccine-promotion partner Frank Vandenbroucke. 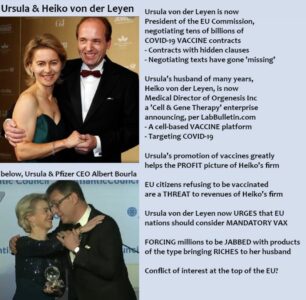 So it seems Ursula von der Leyen’s corruption partnership with Belgian ministers, will prevent her from ever being prosecuted for whatever criminal acts she conducted with Pfizer and vaccine companies, Von der Leyen’s Belgian government minister friends able to block Belgian police from ever doing anything against her.

US DOLLARS THE GIMP!

These sodomites are all in for a very crude yet rude awakening which will see to their own destructions, just you wait and see,you see TRUTH NEVER LIES YET LIES HAS NOR GUTS TO GET THE JOB DONE, back off or prepare to die yet again in shame except this time no more redemption fascist biggot kuntz! =Z=

700k more soldiers
Reply to  US DOLLARS THE GIMP!

You can be a good Russian general

EU deep state is the mirror image of USSA deep state. There is no justice, reason or laws in these lands, only the tyranny of a small beaurocratic tribe. “The experts”, “the specialists” has taken everything under their control and is no way to have them eliminated.

The von der Leyens are headed for the Ceausescu treatment . . .

A victim of the raid: https://t.me/DeutschesReich1871bisheute

I see some tweets on twitter that claimimg; 1.Ursula’s husband ownimg a big pharmaceutical company. 2.They have made millions of dollars from forcibly selling the covid vaccine by ursula’s husband’s company. 3.It is known that some FIFA officials are also involved in corruption (Giving the World Cup to Qatar) 4.Terrorist organization operation in Germany is a false flag (to give more power to the authorities’ powers)

“The EU – Controlled by Corrupt Germans” … lmfao! Has Tribunus Bruxellae seriously not noticed that Germany is still occupied by the British and Americans, almost 80 years after the end of WW II, and that its media is still controlled by the CIA? I guess if you are deaf, dumb and blind, you can write such complete nonsense.

These clowns never heard of Udo Ulfkotte and the Al CIAduh owned Germnanistan gig but having said that a lot of Germanistan EUSSR oligarchs are simple Atlanticist whores and always were. Look at the Thyssen Harriman Bank slash Bush profiteering with Standard Oil until at least 1943.

Prince Reuss is a role, played by actors but sure.. neoliberal corporations and their parent corporation Vatican-City of London-D.C.

Oh dear once more sordid tales of the ridiculous, corrupt, vapid Hair-Stylist-In-Chief of the evil EUSSR, unelected, Red Shield selected “boss” of the Pedovore Politburo in the Brussels Natostan sewer, aerosol queen and nail lady, Uschi Van der Lyin’ and yet some people imagine that this clown actually runs the fascist entity that owns Urupp and all its livestock? You might as well say that the Cadaver-In-Chief aka the “Joe Biden” runs the Washing town sewer in USSA.

Meanwhile in the real world Mother Russia is cleaning up the evil slop in aisle 5 of fast evaporating rump Ukrapland.

Note the parallel to US January 6, and Canada trucker convoy, the only Jan 6 death / murder were by Deep State police/ security, the only violence in the ‘racist sexist’ trucker demonstration was a police on horseback trampling a Metis woman in a wheelchair. Let’s hope Putin crushes the ’empire of lies’.

The EU was based on the idea of Walter Funk, a convicted Nazi war criminal, head of the Reichsbank and Hitler’s personal financial advisor. He saw the need for the creation of a “Central European Union” as well as a “European Economic Area” and fixed exchange rates. This quote from the Nazi war criminal Funk also shows how closely the EU follows Nazi ideology: “The will for European community work, as it is now being shaped under the hard pressure of war conditions, must be the guiding principle of the prevailing economic mindset in peacetime as well.” What did you expect differently here? The adoption of EU law by member states even comes from a speech by Adolf Hitler. Even the EU and NATO expansion to the East came from the Nazis. They called it “Ostbund.” The whole Russian population must finally learn to understand that the German Nazis have only started another attempt to destroy their country, to murder them and to steal their natural resources.