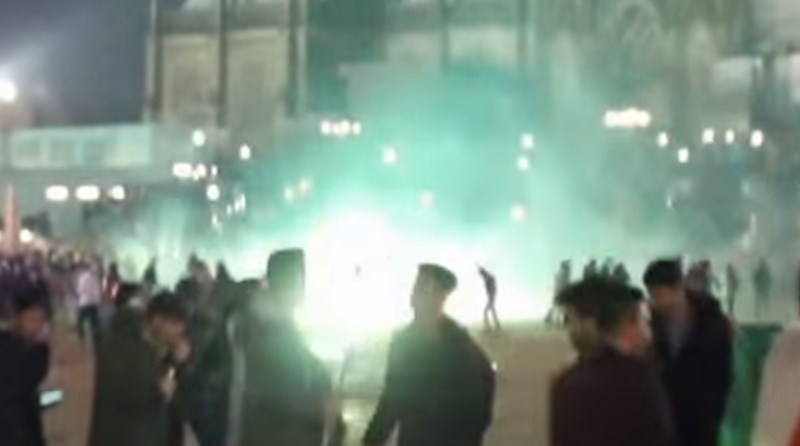 Cologne. Screenshot from the video

German authorities are being accused of covering up a mass sexual assault at Cologne train station on New Years Eve, during which Arab and North African migrants molested dozens of women after fireworks were thrown into a crowd.

The incident began when an intoxicated crowd of around 500 young Arab and North African men “flooded the city’s famous square between its central train station and Gothic cathedral” and “began throwing firecrackers and shooting fireworks as the new year arrived.”

At least 35 women were subjected to sexual assault during the subsequent rampage, with one report of rape. Others were targeted for theft, with at least 80 victims in total.

“I was groped everywhere. It was a nightmare. Although we shouted and beat them, the guys did not stop. I was desperate and think I was touched around 100 times in the 200 meters,” said one of the victims. “Fortunately I wore a jacket and trousers. A skirt would probably have been torn away from me.”

Around 200 police officers and federal agents were deployed but only a handful of the perpetrators were subsequently arrested.

“We cannot tolerate this development of lawlessness,” Reker told the Kolner Stadt-Anzeiger newspaper.

“We will not accept that groups of North African men gather expressly for the purpose of debasing women by sexually assaulting them,” added Ralf Jager, state interior minister for North Rhine-Westphalia.

Other politicians called on Angela Merkel to change the country’s policy on admitting migrants from the Middle East.

According to Anabel Schunke, a writer for Huffington Post Deutschland, police refused to describe the appearance of the culprits when asking for witnesses “to protect public order.”

Despite an abundance of CCTV footage, authorities decided against describing the men as Arab and North African, “so that the public would not make a connection between the crime and refugees.” Schunke writes of her concern that Germany is importing huge numbers of young men from “patriarchal, Muslim societies” that have little respect for women.

Critics have also pointed to the fact that the story has been ignored by many large German news outlets. In general, English-language mainstream media has also failed to report on what happened, although BBC News did cover the story.

“Many people accused the national media of engaging in a cover-up due to the ethnic background of the criminals, with many pointing to the fact that it took days before the details of the story reached national attention,”reports the Local.

Asylum seekers in Sweden also decided to celebrate the new year by sexually molesting women in the town of Kalmar.

“The men formed a ring around the young girls who felt very repressed. They began to grope the girls, and did not stop even though the girls repeatedly told them to. The men did not understand Swedish or English,”according to police.

The young men then made their way to a nightclub where they continued to sexually molest Swedish women.

This is not the first time that authorities in Germany have been accused of covering up crimes committed by migrants.

After a 13-year-old girl was raped at a migrant camp in Detmold, police buried the incident, fearing it could lead to “right wing demonstrations.”

“Although the rape took place in June, police kept silent about it for nearly three months, until local media published a story about the crime,” wrote Soeren Kern. “According to an editorial comment in the newspaper Westfalen-Blatt, police are refusing to go public about crimes involving refugees and migrants because they do not want to give legitimacy to critics of mass migration.”

As the Gatestone Institute documents, reports of migrants raping women in and around migrant camps in Germany have exploded since the country opened its borders to around a million “refugees” last year.