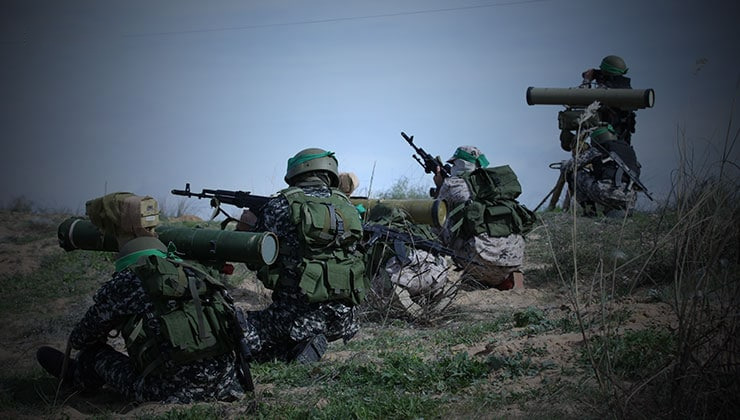 On May 12, the Israeli Defense Forces (IDF) sustained their first causality since the outbreak of the clashes with Palestinian factions in the Gaza Strip.

An Israeli soldier was killed and two others were severely injured when their SUV was hit by an anti-tank guided missile, reportedly a Russian-made Kornet-E, while it was passing on a road to the north of Gaza.

In a statement, the Izz ad-Din al-Qassam Brigades, the military wing of the Hamas Movement, claimed responsibility for the missile strike. According to the group’s statement, 21 mortar rounds were fired at the vicinity of the targeted vehicle after the strike.

Video from Walla from the scene of the ATGM attack on the Gaza border that killed 1, and wounded 2 others pic.twitter.com/M5nsW1sevS

Israeli media reported that Prime Minister Benjamin Netanyahu had ordered the IDF to expand its operations in Gaza in response to the missile strike. Later, the IDF announced that it had neutralized two anti-tank units of Hamas.

IDF strikes in Khan Younis, southern Gaza, a short while ago pic.twitter.com/G9UzNgSwni

The clashes in Gaza breakout on May 10 when Palestinian factions launched a large operation, codenamed “Sword of Jerusalem,” in response to attempts by Israeli authorities to forcible evict several Arabian families from Sheikh Jarrah neighborhood in Jerusalem.

According to the IDF, Gaza factions have launched over 1,050 projectiles at Israel, so far. At least five Israeli citizens were killed and more than 90 others were wounded.

On the other side, the Israeli strikes on Gaza claimed the lives of 48 people, including 14 children and 4 women. More than 300 others sustained injures.

The battle in Gaza will not likely end any time soon. In spite of ongoing de-escalation efforts by Egypt, Israeli Defense Minister Benny Gantz said that “there is no end date” to the IDF operation in the Palestinian region.

The zios are very brave as long as nobody’s shooting back.

IF WE ALL REMAIN SILENT ON JEWISH TERRORISM AGAINST UNARMED PALESTINIANS IN OCC.PALESTINE, WE ARE ALL COMPLICIT. WE MUST SPEAK UP AND NAME AND SHAME AND ACT AGAINST THE SMALL GROUP OF VERY WELL ARMED FANATICAL RACIST MONSTERS

They got one of my many gay friends but by the will of “our” god the great Satan we will win.

They have won several wars against overwhelming military forces several times too. You forget that.

Don’t worry I use condoms, unlike our brother ISIL that fuk each other raw. Please send us more money we need it, for more gay g0y parties and being terrorists…much love you good old Satanic people Zion.

Gays are the best. They have time for education payin a lot of tax and they make no children. You should respect that. Muxch as You think with the little oneprobatly only visible by microskope.

Facts are 10% on the whole world are sexual minorities and it makes no sense to make trenches to feel above them. You should try something else.

Here in Denmark we are proud including people. We also are not missing the many machos telling three times a day, they are not gay.

Thats not related at all. Make Yourt own money lazybum. UNICEF probatly is feeding Your children and wife too and Your father bought Your wife for You for not to loose face.

At least we have a job. We soon can buy Spain.

Thé zio-SIONIST-NAZISTAN OF ISRAËL ARE CRAZY KILLING CHILDREN AND WOMEN.THEY WILL BE BURNED IN .PALESTINIANS HAVE THE RIGHT FOR THEM .ONE DAY ISRAEL WILL BE DESTROYED LIKE APARTHEID IN SOUTH AFRICA, AND MR JENS HOLM WILL GO BACK TO HOME IN AMERICA OR EUROPE

As gay myself I have to protect our beloved gays such as Zion (my beloved Husband Iron_Zion) and Wahhabi, they may be terrorists but I don’t care, love is stronger than hate…here in downtown Denmark, I suck dick for 2krone. I do you guys for 1krone…

The colony of ISRAËL is a same on earth

Crazy peuple this or iron _sheet and jens holm

You WILL buy your mother and sister for one scheckel, crazy people of sionistan,Hitler is your master and teacher for génocide the palestinians,the children and the women go to tell.

I just love the site of hundreds of rockets launching. That they are intended for the Satanists is just icing on the cake. Of course, the site of Israel afire is pretty pleasing as well. I would say Boo-Hoo, but that would be hypocritical. HAHAHAHA.

This is the new forums.

More IDF vermin to follow. Extermination is the solution.

SATANIC VERSES OF THE TALMUD’S

Pals start it. Israel ends it. This time, they look like they are going to pay a heavier price than usual.