Sweden once again claimed that it discovered a “Russian submarine” in its territorial waters.

The Swedish newspaper Dagens Nyheter reported that a craft that was perceived to be a submarine had been observed inside the Stockholm archipelago in the summer of 2018.

The Swedish Armed Forces investigated the incident; however, the reports were classified.

It happened on June 28th, when three instructors from a sailing school were putting out buoys off the northern Lidingö near a facility belonging to the Swedish Sports Confederation.

The Swedish Armed Forces didn’t perform any actions in the area on that day.

“I saw bubbles form in the water, it happened behind the boat, so I thought it was a roaring motor,” an instructor told Dagens Nyheter.

The instructors themselves didn’t report the event though. The Armed Forces were informed by an officer who is an acquaintance of one the instructors and learned of their observation.

On July 4th, two Armed Forces officers went to the same place with one of the instructors.

Ola Oskarsson, an expert on underwater surveys, said the photographic documentation of the purported submarine was “very good.”

“These are the best pictures of what might be a suspected submarine that I’ve ever seen,” he was cited as saying.

A subsequent survey also showed “visible imprints” of a submarine ten weeks after the observation. As reported by Sputnik, retired Commander Nils-Ove Jansson said that according to his assessment, this was a “probably submarine” that could be classified as number two on a military scale, where one stands for “confirmed submarine” and five for “non-submarine.”

Sweden has a history of discovering foreign and mostly Russian “submarines.”

In October 1981, a Soviet S-363 submarine ran aground near a Swedish naval base in Karlskrona. Interestingly, it was not detected by the Swedish radars and it was discovered by fishermen.

Since then there were several submarine scares. Most notably in April 2011, a possible foreign submarine was reported in Baggensfjärden in Nacka. The Swedish Armed Forces’ Naval Tactical intelligence service, MTS-M2 investigated the incident. Later it was confirmed that the object was really a raft frozen in moving ice.

In the same year, but in September an eyewitness contacted the Swedish Armed Forces after seeing something outside the harbor of Gothenburg that possibly could have been a foreign submarine. The Swedish Navy deployed several surface warships in an attempt to locate the unknown object. The search led to nothing.

The culmination came between October 17th and 24th, 2014 when a large military operation was launched to search for an allegedly damaged submarine in Kanholmsfjärden in the Stockholm archipelago. The operation to search for submarines in 2014 cost approximately $2 million.

The “Russian submarine” concerns had their first conclusive result in 2015. Swedish forces discovered an actual Russian sub. However, it was from pre-Soviet times and had sunk in Swedish waters in 1916.

On April 27th, 2015, the Swedish Peace and Arbitration Society (SPAS) took matters into its own hands and undertook to protect its country from the “Russian submarine threat.”

The society launched their own defensive network – the Singing Sailor Underwater Defense System, better known as the “gay sailor.” It is a neon sign with a half-naked dancing sailor surrounded by hearts. It has a written message which reads “Welcome to Sweden: Gay since 1944.” 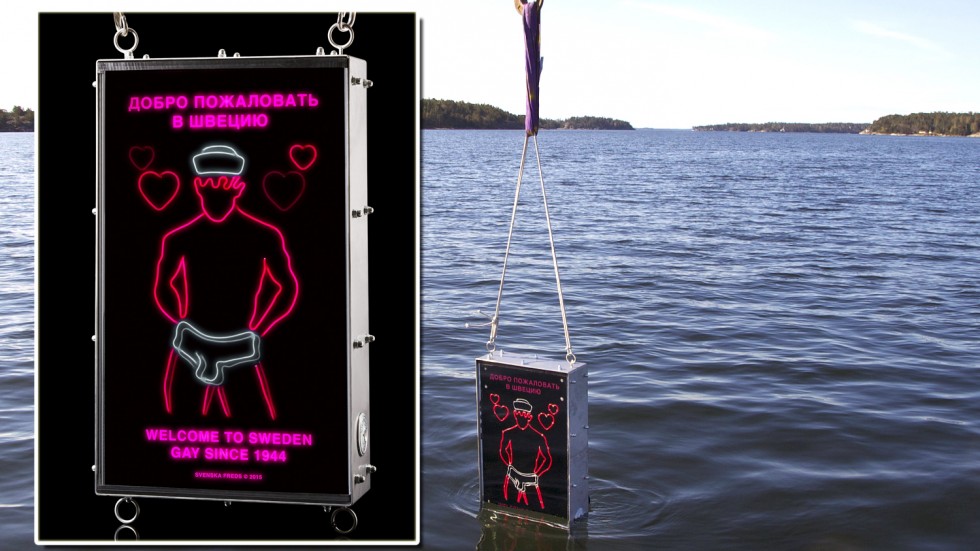 In case the Russians do not understand, it emits a Morse code signal in English and Russian which states: “This way if you’re gay.” It is also a stab at Russia’s criticized “anti-LGBT” laws.

Unsurprisingly the 2018 “Russian submarine” scare met with a skeptical reaction from Swedish netizens on Twitter.

“So, the parasites in the Swedish fleet are out to get more funds again,” Maria Engström tweeted, to which another user replied “And certainly the sub is a Russian one.”

“I’ve solved the mystery for you completely free of charge. Clearly, it’s a sauna raft,” another user chipped in, posting a video of a “submarine-like,” further claiming that nobody would take the possibility of a foreign submarine hovering around an island such as Lidingö, which is famous for its wealthy residents.

“Was there a suspicious submarine seen in the Stockholm archipelago? No, probably merely a torpedo from the underworld.”

This is a lighthearted incident that has not led to any repercussions. However, even this shows the evident MSM hysteria caused by constant finger-pointing at Russia, without the provision of any evidence whatsoever.

So nobody really saw anything, knew what they saw or have proof of anything?

I perhaps maybe could have possibly optically encountered or visualized something or someone some time back on a nonlit sky at some point of day at a location on Planet Earth (I think) opposite West. So i de facto saw a Russian airborne Division training with the new stealth suits on!

Anyone wants to write an article about it?

“This is a lighthearted incident that has not led to any repercussions. However, even this shows the evident MSM hysteria caused by constant finger-pointing at Russia, without the provision of any evidence whatsoever.”

“Dagens Nyheter reported that a craft that was perceived to be a submarine had been observed inside the Stockholm archipelago in the summer of 2018.” ……. not observed, but perceived !!.

Very good; had me laughing.

The ‘Western block’ are soo humourless these days Al.

‘Shit Stabbing’ is far more important for NATO armies these days , which is actually a good thing as it only increases the impotency of the Western regimes :)

Shit stabbing – whahahahaha, are we back to the LGBT bloke things ?.

Kremlin paid propaganda with weaponized humour and straight forward attack against our Western values and I must say Kremlin are good at it.

This is the danger of seeing these Kremlin made propaganda videos, that it destroys the mind and hearts of our Western children and youth. But we will not sit on our hands and voluntary give up our freedom and our values to this kind of undermining weaponized truth from Putin!

No! More funding to Infowarriors will be provided to counter Russia´s be-gooder brainwashing that are sneaking in upon America and our Allies as we have the right to defend ourselves!

One would think high tech Sweden would be capable of using underwater sensors or aerial drones to monitor the Archipelago.

Remember the last accusation, big Western uproar and it was a sunken WWII sub, or something so insane.

One would think technology us nit as advanced as you think.

Its ok, you have no idea what your talking about.

Your just the village idiot pestering us with nonsense today

This is a photo of Trojson’s Shtetl Mike :)

Best you can do is insult my family. That picture is far better than the house my grandfather was raised in.

Guess you disagree and know Sweden is incapable of monitoring the Archipelago for Russian subs. To each his own.

Talkin’ about monitoring…. planning to stay long in here?

This is a joke.

This part is interesting:

A subsequent survey also showed “visible imprints” of a submarine ten weeks after the observation.

The evidence? A note which says:

There’s money to be made chasing ghosts :)

It is easily verifiable through obscurely referenced NATO nanotechnology methods that are decades ahead of other science fiction techniques that Russian submarines leave holes in the water that don’t ever quite fill in correctly afterwards. ;-D

The way the USA has covertly taken over so many countries is quite alarming, but the people don’t seem to know or care.

NATO wants to take on RUSSIA?! (and maybe China) NATO cannot defend it’s own people at HOME. NATO cannot beat ISIS-AlQueda-Taliban-AlNusra NATO families will be raped & murdered as NATO Troops fight far from home. NATO installations will be sabotaged by Refujihadi Invaders. NATO Troops should turn their weapons on their ENEMIES that are betraying them.

NATO defeated itself by being invaded and overrun by the REFUJIHADIS from the wars NATO started but can’t FINISH …………. THAT has to be a FIRST in all history. Waffling and ranting about the Russian threat whilst the real enemy sits in our government offices and marches in our gates. We pay them to plot against us. We pay them to out breed us. We watch while they commit treason and sedition. We hand the West to them on a plate. Only Russia, Poland, Hungary are standing up and fighting them.

We are up against an enemy with unlimited access to money.

Taleban succeeded to 30 double the opiums fields in Afghan right under US/NATO´s nose, exploited our softness and produces today 6000 heroine to ISIS terrorists.

ISIS sell it all in America and Europe so WE are paying them unlimited to terrorise ourselves in OUR homes thus jeopardizing our Western freedom values if we dont do something now and the sheeple refuse to wake up!

” “I saw bubbles form in the water, it happened behind the boat….”

The Russians have weapons that will destroy Sweden (and soon). Sweden has gay sailor signs.

Yup…no pics, no proof. Kinda MH17, Assad gassing his own people, Hussein’s WMD’s, hell, even osama biin laden was a fake, and dingleberry omama didn’t kill him aand bury him at sea.