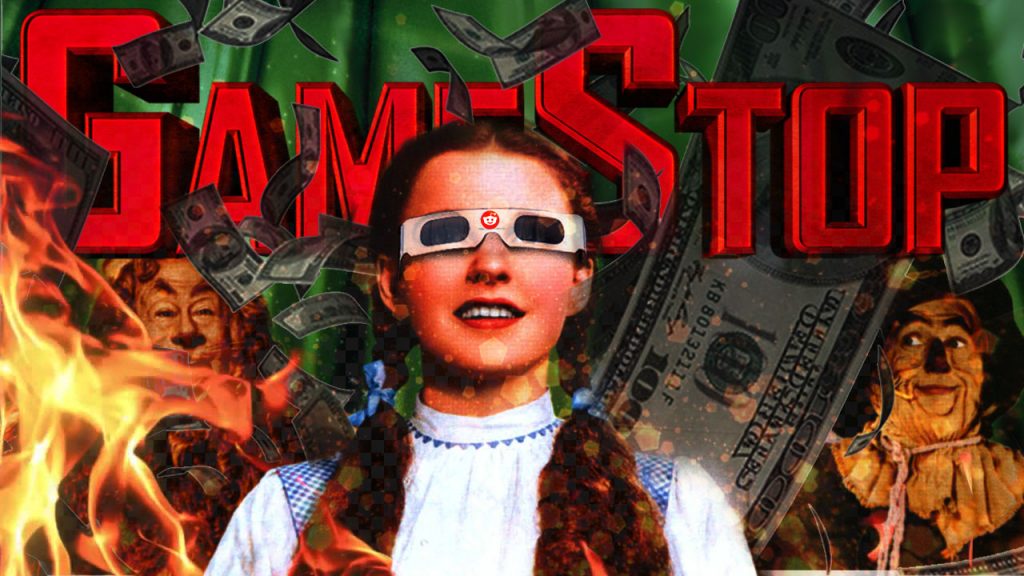 The 19th century fantasy novel The Wizard of Oz that was made into a world-famous movie in the 1930s in the midst of the Great Depression contained a great deal of wisdom about the inner workings of US politics. Arguably the most important was the injunction to “pay no attention to the man behind the curtain” working the real levers of power even as buffoonish politicians strut and preen and play golf at Mar-a-Lago in order to provide appropriate distractions. Should the curtain be pulled back and the ‘man behind the curtain” revealed, it endangers the continued existence of the entire system whose real workings must remain concealed in order to retain their effectiveness.

The GameStop story and the associated RobinHood day-trading firm fiasco is already the second “man behind the curtain” moment of the Biden Administration which has barely been inaugurated. The first was the impossible to conceal collusion among the Big Tech social media firms in de-platforming “undesirable” politicians and journalists following the 1/6 protests in Washington D.C. For all the protestations about the autonomy of the privately-owned Big Tech that were purportedly free to set an enforce whatever Terms of Service they saw fit, the pattern of censorship made it plain that they were acting at the behest of specific factions of US politics.

The GameStop fiasco represents another such “man behind the curtain” moment, and arguably one of greater import since it actually involves…money. With the stakes being tens of billions of dollars on that one stock alone, not to mention the reputation of the US financial and asset trading system. To make long story short, a group of small-time investors used Reddit forums to strategize and coordinate in order to take advantage of emerging trends. One tactic they developed was focusing on stocks that major hedge funds were shorting in order to drive down their stock price and render the targeted companies more vulnerable to a hostile take-over by private equity firms, to be followed by asset-stripping. Given the distress the COVID-19 pandemic inflicted on the retail sector, particularly specialized retail chains that were already struggling with such giants as Wal-Mart and Amazon even in the best of times, these types of stocks were attractive targets for hedge funds.

Considering the political power wielded by Wal-Mart and especially Amazon, the combination of foot-dragging on economic assistance to distressed businesses and hedge funds operations may actually be part of a coordinated strategy. Once specialized retail chains are driven out of business by that combination of policies, they will not be replaced by similar businesses. Rather, their market share will inevitably fall to Wal-Mart and Amazon.

What the hedge funds did not anticipate was the Reddit insurgency by small investors congregating on forums such as r/wallstreetbets and plotting strategies to challenge hedge funds by driving stocks in the opposite direction—up—and make money off the unanticipated price swing.  Judging by social media posts, some of the redditors were motivated by the desire to inflict pain on hedge funds as much, if not more, than by the desire to make money off their investments. The result was a bloodbath. On shorted GameStop stocks alone, hedge funds lost $19 billion. One hedge fund, Melvin Capital, lost more than half of its operating capital and was forced to tap into its emergency reserves. The full scope of the carnage was even greater, as GameStop was only the “flagship” stock in this operation. However, at this point the curtain was rudely pulled back.

The Woman Behind the Curtain

It began by the day-trading brokerage RobinHood suspending purchases of GameStop stock and even imposing involuntary sales on those holding it. It transpired that RobinHood’s main source of income was Citadel hedge fund which was badly suffering from the short squeeze imposed by the insurgent investors, with RobinHood in effect colluding with Citadel in order to protect its investments even at the cost of hurting its own small-time customers. To make the picture of corruption even more complete, US independent media reminded everyone that Joe Biden’s hand-picked Secretary of Treasury Janet Yellen earned enormous sums of money, close to $1 million for giving speeches to closed groups of Citadel executives. Since the sum of money earned by giving mere speeches greatly exceeds Yellen’s official salary from her ostensible “day job”, one can only surmise her speeches must have contained The Secret of Eternal Life, or at the very least The Secret of Eternal Tax Break. Or, more prosaically, they were naked bribes paid to a highly placed government official with the intent of influencing her policies toward financial firms her department was supposed to oversee and rein in. When the issue was brought up at a White House press briefing, the Press Secretary Jen Psaki said with a perfectly straight face that Yellen, being an “expert”, deserved all of that money, without even attempting to address the gigantic conflict of interest her activities created. What is more, Citadel turned out to be one of several financial firms paying Yellen for her expertise.

That they spent their money well was soon demonstrated by Yellen’s eagerness to crack down not on the hedge funds and day trading firms, but on Reddit forums where the insurgency was orchestrated. Similar vibes emanated from Senator and failed presidential candidate Elizabeth Warren. Other “liberal” champions voiced no opinion on the matter whatsoever. To make matters worse, RobinHood CEO Tenev actually suggested in a TV interview that Big Tech got in on the act too. Google, for example, simply dropped negative ratings RobinHood got for its egregious breach of customer confidence. The affair even  prompted a rare feud among the otherwise marching in lock-step late night talk show host. While Jon Stewart praised the Reddit insurgents, Jimmy Kimmel actually accused them of being “Russian disruptors” and even half-in-jest accused Jon Stewart’s account of being secretly run by @realDonaldTrump.

The first two months of 2021 gave us crises that revealed the rotten nature of two sets of institutions, first the Big Tech, and now the Big Finance which clearly enjoys from a playing field tilted in its favor. Since US assessments of Russia’s weaknesses tend to be projections of America’s own weaknesses onto that country, the belief that Russia’s political system could be brought down by targeting the “oligarchs” suggests that maybe America’s own “oligarchs” will remain loyal to the political system only as long as it continues to make them ever-richer. The political system has done through a combination of unsustainable and ultimately self-defeating policies. The first is massive monetary stimulus in the form of “quantitative easing”, or purchasing of financial assets by the Federal Reserve. The second, and the one just made very visible, is limiting access to the masses of money released through quantitative easing to a very select group of elite actors, namely the “oligarchs” whose loyalty to the US political system has to be bought. But this is now being done at the cost of radicalizing all those who have now found themselves to be excluded.

Here is a little film made from a story in real life on how the 99% is cooperating, and what will happen when the 99% starts cooperating. https://www.youtube.com/watch?v=bJjje4iZPXg

You and the sheeple have now seen the film. The sheeple will realize they have to change bus driver to avoid future similar incidents. They employ the knife bully as bus driver because he can provide security and comfort on their travels, and they employ the head of the two man mafia as CEO for the bus company. The sheeple now feel safe, and of the two who cared one is now dead and our hero is left alone without anything in the desert.

and tell us who are the 1% in Russia and China,one clue 1% have the real power not only money,be honest please,

It is all about intentions….

The GameStop ‘fiasco’ gave millions upon millions of people a first hand experience into the rigged market they once thought was fair. It has validated everyone who have been blowing their whistles for a long time but were condemned as conspiracy theorists. Now that Yellen has her special pass in order to save her cash machine, the rigged market with all its corruption is in everyone’s face and cannot be missed.

I’m surprised that Reddit was even allowed to continue considering how easy it was for other sites to be shut down on a whim.

The US is starting to resemble a very large plantation.

Get Real. Gamestop has a failing business plan and is rightly shorted. Gamestop is being inflated artificially and is basically an example of free market socialism where dumb people artificially inflate a stock for reasons of misplaced pride. ‘Shorting’ makes up roughly 2% of the market, traders that shorted stock lost huge on Tesla all year long, it is a dangerous business that loses more often than gaining