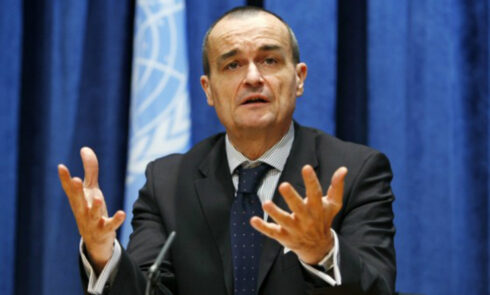 Gérard Araud was not mincing his words.  As France’s former ambassador to Washington, he had seen enough.  At a November 14 panel hosted by the Quincy Institute for Responsible Statecraft titled “Is America Ready for a Multipolar Word?”, Araud decried the “economic warfare” being waged by the United States against China, expressing the view that Europe was concerned by the evident “containment policy” being pursued.

Araud is very much the diplomat establishment figure, having also served as French representative to the United Nations from 2009 to 2014.  But despite his pedigree, he was most keen to fire off a few salvos against such concepts as the “rules-based order” so treasured by the Anglosphere and the “West” more broadly defined.

“To be frank, I’ve always been extremely sceptical about this idea of a ‘rules-based order’.”  Both he and the French in general loved the United Nations, “but the Americans not too much”.

With unerring frankness, he also noted that the UN and broader international hierarchy was dominated by the US-European bloc.  The undersecretaries to the organisation reflected that fact, as did the stewardship of the World Bank and the IMF.  “So that’s the first element: this order is our order.”

The second element was historical: the balance of power as it was in the war-ruined world of 1945.  “Really people forget that, if China and Russia are obliged to oppose [with] their veto, it is because frankly the Security Council is most of the time, 95% of the time, has a Western-oriented majority.”

French President Emmanuel Macron has adopted elements of Araud’s thinking, notably regarding the problems and limits of US domination, while still reasserting the value of France’s own global imprint.  Such actions and sombre strategizing are taking place in the shadow of the West’s decline.  In a recent closed-door meeting with his top diplomats, Macron remarked that “the international order is being upended in a whole new way.  It is a transformation of the international order.  I must admit that Western hegemony may be coming to an end”.

This theme of decline in Macron’s is an ongoing Spenglerian motif.  It surfaced at the end of the G-7 summit in 2019, where he reflected on the decline of Western dominance while pondering the finance-obsessed nature of the global market economy.  This was pretty rich coming from a banker, though he was certainly right on the issue of greater multipolarity.

To his diplomats, Macron paddled in the waters of history, reflecting on French power in the 18th century, the Industrial Revolution led by Britain in the 19th century, and the brute dominance of the United States from the 20th century.  With typically Gallic, broad stroke synthesis, he suggested that “France is culture, England is industry, and America is war.”

Then came the finger pointing, sharply directed at the biggest of culprits and the underminers of the West.  “Within Western countries, many wrong choices the United States has made in the face of crises have deeply shaken our hegemony.”  It was not something that began with the Trump administration; previous US presidents “made other wrong choices long before Trump, Clinton’s China policy, Bush’s war policy, Obama’s world financial crisis, and quantitative easing policy.”

To this swipe at Washington could be added the role of emerging powers, which were underestimated by the West “not just two years ago, but as early as ten or twenty years ago.”  He admitted that “China and Russia have achieved great success over the years under different leadership styles.”

Despite such rueful admissions about decline, Macron is still keen to pursue a form of geopolitical balancing, notably in the Indo-Pacific.  This is code for the pursuing French interests in a region that is increasingly looking like exploding into a folly-driven conflict between the Chinese and US camps.  But Paris is hardly going to miss out pushing the credentials of its defence industry, which took a bruising with the scuppering of the Attack Class submarine deal with the Australian government in September last year.

In February, Macron convinced Jakarta to ink a deal worth $8.1 billion for 42 Rafale fighter jets produced by Dassault Aviation.  Two diesel-electric Scorpène-class attack submarines produced by the Naval Group have also been added to the mix, along with ammunition, making the arrangements with Jakarta some of the most lucrative for France in Southeast Asia.

On his current visit to Washington, Macron is facing those old problems of US power.  While Australia was designated assassin in killing off the submarine contract, the ammunition came from Washington as part of the AUKUS security pact, a spear pointing at China in the Indo-Pacific.  President Joe Biden has merely described the handling of the whole matter as “clumsy”.

Then come such issues as the Inflation Reduction Act (IRA), which gives advantageous climate subsidies to US companies over their European counterparts, and how the Ukraine War is to be addressed.  Biden has no inclination to speak to Vladimir Putin in the Kremlin, content to let the war rage as long as it bleeds Russia; Macron has been more than willing to keep the lines open, acknowledging that diplomacy, however frail, must at least be drip-fed.

In his own reflections on what could be done regarding the US-Western parochialism of the rules-based order, Araud made the obvious point.  Any genuine international system purporting to be undergirded by rules had to integrate “all the major stakeholders into managing of the world, you know really bringing in the Chinese, the Indians, and really other countries, and trying to build with them, on an equal basis, the world of tomorrow.”  What a daring idea, and one that is bound to avoid a global conflict.  For that reason, it won’t be embraced.

F the French. France is culture…culture of colonialism that is. There are some of us here in the US that know who was who and who did what in our civil war. Our civil war was precipitated by the Europeans, although they are loathe to admit it. England and France were posed to take all they could from the South to prevent our North was becoming an industrial power. When England decided to try to keep the north from southern cotton, to cement their lead in textiles…France was right there to join in. Lincoln had representatives of France and England, who were visiting the south, captured and told them if their interference didn’t stop, he would be bringing the war to their shores by parking Old Ironsides off their coasts. There was, however, a country that came to our aid by blocking NY harbor with their fleet, in 1863, to protect us from the Brits who were threatening and instigating our war. Yes, Russia. Russia has been our most stalwart ally, not a leech seeking our demise, like the Europeans. How we are treating the Russians today is a travesty. The EU, just desserts. Those that seek to control the world came from Europe and infested and corrupted the US. They helped create this monster, so I have little sympathy for them. BTW, haven’t both been on board with every rotten trick and war instigation? Of course. Now that they are on the receiving end, the rules aren’t fair. Were they fair for Libya? Syria? Iraq? Iran? Yemen? You know, where all the ‘immigrants’ (not refugees, never refugees) flooding the EU come from. It’s your bed, you made it, now deal with the wrinkles. I feel for the people, but these criminals posing as politicians? F them, they need a Mussolini award. In case people wonder, I feel the same for the criminal cabal here in the US.

I agree. The one world order was a plan formulated in Europe. They then infiltrated America and hijacked it for their own purposes. They wanted America for its advantageous geography. Most “American” elites are of European jewish origin. The sooner real Americans wake up to the reality that they are governed by an occupying government, the better.

“Our civil war was precipitated by the Europeans”! And where did you come from, Mars?

just because Americans originated in Europe doesn’t mean that they’re European. My ancestors came to America 400 years ago, I’m not European.

Have you ever heard the term King Cotton, moron? I doubt that you know a damn thing as to US history. When was the beginning of the industrial revolution? Do you know who Eli Whitney was? When was the US civil war? In case you don’t know, the money mongers in Britain and the rest in Europe are those who drive wars and have done so for years. Ask Russians. If you’re stupid enough to believe our civil war was over slavery, then buy a bridge from Darius.

The French and American values are the same since both are ruled by Jews. Mass migration to replace the whites, and homosexual sex with children as a holy sacrament.

This one gets it. They utilize the holocaust to make themselves above criticism.

These days, I think they engineered it themselves. It was already “predicted” in the famous Protocols.

Spengler was right about the decline of the West. I have been saying in the past few years that a new Europe would emerge which will be more Christian and less globalist.

When has the SC ever been anything but western dominated? I have no sympathy for him, we have the same sick bosses he has. Did he cry when Libya was decimated? Is he crying about the Ukrainians or the fact that their own shit has come home to roost. They had plenty of time to jump ship, DeGaulle did it. They better get around to telling the US to FO.

The so called “anti racism” is just as bad as “racism”. Pure divide and conquer.

I accept LGB but not T.

by a global order, he means ‘lockstep’ cvd19 tyranny, climate change tyranny, ‘peace’ as submission, ‘democracy’ as continued illusion of choice via media monopoly, economic sustainable as the 1% can afford electric cars. Putin and Xi are all-in on vaccine passports, AI,

So, asia is coming, and old man europe is showing off his liver spots and medication bottles and the rhetoric of old is old and tired just like he is. Asia, by itself, is home to about 5.5-6 billion people many of whom weren’t even brn when league of nations became the UN of today and can probably get along quite well without europe, the UN, the US, or rules-based whatever you’re doing, there.

The europeans need to get their stuff in one bag and stop being internationally bossy, and as for the UN its probably time to talk about sunsetting the whole thing and figuring out a new and better, more relevant and competent way of doing business. The 21st century just don’t care, and neither do the chinese.