A communique released following the G7 summit, which was released on June 7-8 in Canada, included a few interesting points about Russia as well as conflicts in Syria and Ukraine.

US President Donald Trump withdrew his signature from the communique at the very last moment accusing Trudeau of being “dishonest and weak”.

So, what does the G7 minus Trump want from Russia and the participants of the conflict in Syria to build “a more peaceful and secure world“?

13. We urge Russia to cease its destabilizing behaviour to undermine democratic systems and its support of the Syrian regime. We condemn the attack using a military-grade nerve agent in Salisbury, United Kingdom. We share and agree with the United Kingdom’s assessment that it is highly likely that the Russian Federation was responsible for the attack, and that there is no plausible alternative explanation. We urge Russia to live up to its international obligations, as well as its responsibilities as a permanent member of the UN Security Council, to uphold international peace and security. Notwithstanding, we will continue to engage with Russia on addressing regional crises and global challenges, where it is in our interests. We reiterate our condemnation of the illegal annexation of Crimea and reaffirm our enduring support for Ukrainian sovereignty, independence and territorial integrity within its internationally-recognized borders. We maintain our commitment to assisting Ukraine in implementing its ambitious and necessary reform agenda. We recall that the continuation of sanctions is clearly linked to Russia’s failure to demonstrate complete implementation of its commitments in the Minsk Agreements and respect for Ukraine’s sovereignty and we fully support the efforts within the Normandy Format and of the Organization for Security and Cooperation in Europe for a solution to the conflict in Eastern Ukraine. Should its actions so require, we also stand ready to take further restrictive measures in order to increase costs on Russia. We remain committed to support Russian civil society and to engage and invest in people-to-people contact.

14. We strongly condemn the murderous brutality of Daesh and its oppression of civilian populations under its control. As an international community, we remain committed to the eradication of Daesh and its hateful ideology. In Syria, we also condemn the repeated and morally reprehensible use of chemical weapons by the Syrian regime and by Daesh. We call on the supporters of the regime to ensure compliance with its obligation to declare and dismantle remaining chemical weapons. We deplore the fact that Syria assumed the presidency of the Conference on Disarmament in May, given its consistent and flagrant disregard of international non-proliferation norms and agreements. We reaffirm our collective commitment to the Chemical Weapons Convention and call on all states to support the upcoming Organisation for the Prohibition of Chemical Weapons (OPCW) Special Conference of States Parties and to work together to strengthen the ability of the OPCW to promote the implementation of the Convention. We call upon those who have yet to do so to join the International Partnership Against Impunity for the Use of Chemical Weapons. We call for credible, inclusive and non-sectarian governance in Syria, facilitated by free and fair elections held to the highest international standards of transparency and accountability, with all Syrians, including members of the diaspora, eligible to participate.

It appears that the communique has just repeated all narratives of the mainstream propaganda. It’s hard to expect that repeating the propaganda accusations could help to build a more secure world.

Who gives a fuck about the G7. Not even Russia wants to get back in.

Well they irritate the shit out of me.

Agree. Who the fuck do they think they are? I hope those fucking Muslims they imported in their countries give it to them in the ass.

LOL. That is what is coming for them but the morons elect twinks, gropers, ciphers, and liars to ensure that there is no escape. They refuse to lift a finger to change their fate so adios to them and the civilization they have destroyed.

Yes but remember the elite you describe will be the very last to be effected and suffer. People like you and me ( well certainly me ) will be the fist to suffer and loose what little we have.

I am wondering when will they be tired?

The European just spit out a lot of shit,as far as deash is concerned they are right. In the hand how can they blame Russia for distabilization and Syrian government of usisng chemical gas is just bull shi,they know is bull shit. The situations in Ukraine would have never take place if the European union didn’t back an illegal coup there and so is Syria,daesh aint the only terrorists group in Syria they are just the one the Russian done demolish and they even outer a word about al-Qaeda whos as cruelty as daesh…dam hypocrites and blood thirsty tyrants. 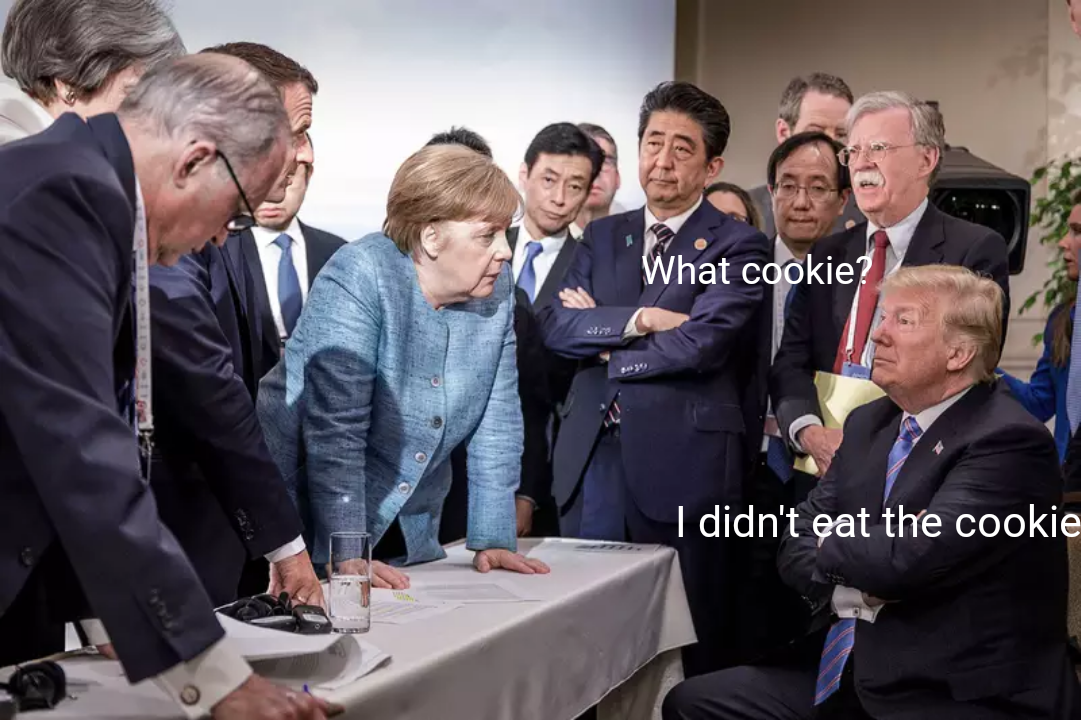 What a pile of rubbish in that communique…

The European just spit out a lot of shit,as far as deash is concerned they are right. In the hand how can they blame Russia for distabilization and Syrian government of usisng chemical gas is just bull shi,they know is bull shit. The situations in Ukraine would have never take place if the European union didn’t back an illegal coup there and so is Syria,daesh aint the only terrorists group in Syria they are just the one the Russian done demolish and they even outer a word about al-Qaeda whos as cruelty as daesh…dam hypocrites and blood thirsty tyrants.

Yeah, quite depressing. Only Trump had backbone not to underwrite this bs.

Yet ,he is a patsy as well if not a protagonist.

AND you voted for them~!
LOL

G7 is world terrorists supporters group. It no Russia presents in its midst to blame for their own lies and rubbish evil devilish greedy fucks.

Incredible. All the Western lapdogs repeat and signed their old lies……………………LOL.

– Skripal chemical fake case was UK revenge for Russia bombing British M16 in E-Ghouta.
– Demanding a free legal democratic election by the people of Crimea to be cancelled.
– Supporting their own murderous coup of Ukraine, threatening “costs” to Russia.
– Condemning their own mercenaries Daesh which walk freely around on welfare in Germany, Italy, UK.
– Interfering in Russia´s internal affairs declaring support for regime change and Soros activities.
– Condemning chemical weapons in Syria although those found are from Germany and UK.
– Ignoring popular support and elections of Assad, calling for a terrorist government in Syria.

Only one man with backbone – gave them the finger and told them what they are, “weak and unreliable”.

Just what do these Pogos think the alternative to Assad is? What a bunch of jerks leading the “West”.

What a sad looking bunch of hypocrites. Pathetic really! 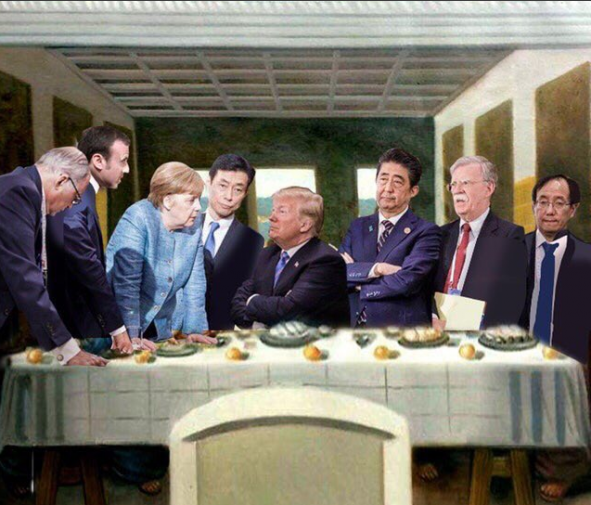 Trudeau was not in the picture because he was getting his makeup touched up. 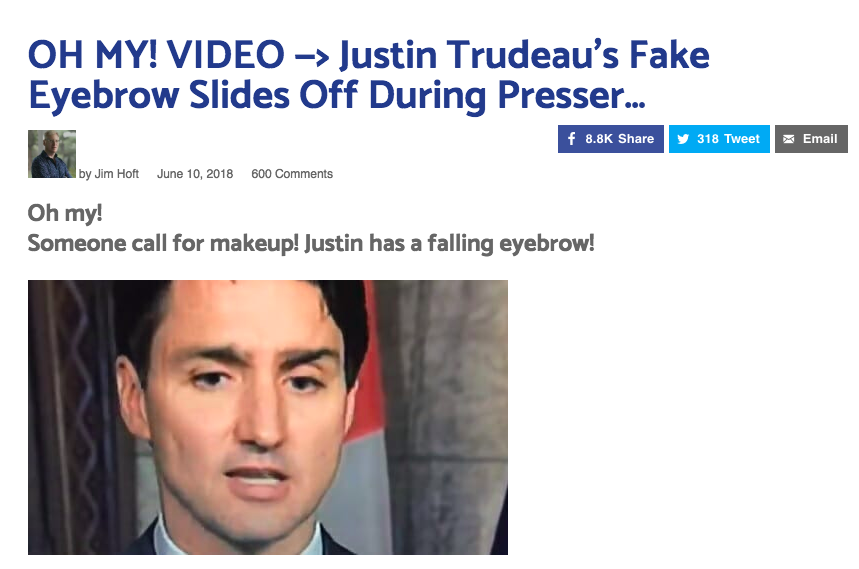 What a BS communique. Toilet paper.

The gall it takes to blatantly lie like this is astounding. Claiming black is white and up is down has become their stock in trade. They know just how ridiculous they are, but they have their Zionist master orders to follow. That’s why they were (s)elected in the first place. Still, the ease with which they proffer this pile of stinking manure is amazing and shows just how compromised they all are.

World would be so much better without them

Zionist controlled governments masquerading as democracies when in fact they are fascists, who do the bidding of the rothschild owned israhell.

Sheesh – will that lot EVER grow a spine or brain?

“We maintain our commitment to assisting Ukraine in implementing its ambitious and necessary reform agenda.” … which, of course, their daily bombing of THEIR OWN PEOPLE in Donetsk and Lugansk.