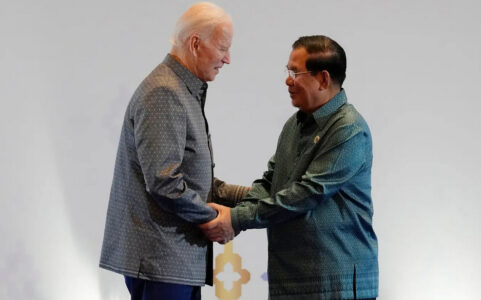 The United States and Russia were unable to agree on language for a joint statement following the multilateral ASEAN summit in Cambodia, making it unlikely that G20 nations will achieve a consensus this week in Indonesia, Bloomberg reports.

According to Russian Foreign Minister Sergei Lavrov, America and its allies are to blame for a lack of communique at the 19-nation summit, claiming on Sunday that the US “insisted on absolutely unacceptable language regarding the situation in Ukraine.”

Russia refuses to describe its invasion of Ukraine as a war, and insists on it being recognized as a “special military operation.”

Lavrov also accused the US of dividing the 10-member Association of Southeast Asian Nations and criticized NATO for stepping up activity in the region. His comments on NATO echo a growing concern of China, even though the US alliance system in Asia doesn’t include NATO’s collective defense agreements. -Bloomberg

“NATO is no longer saying that this is a purely defensive alliance,” said Lavrov, who was dressed like an Indonesian Klingon. “There is a clear trend on militarization of the region through coordination of efforts of local US allies such Australia, New Zealand, Japan with NATO enlargement.” 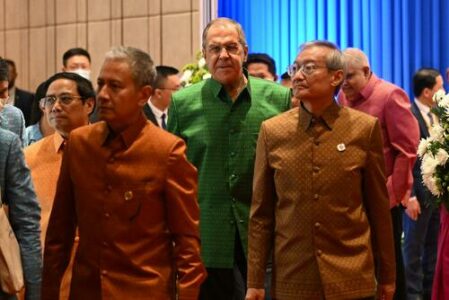 On Monday, US President Biden – who accidentally thanked Colombia instead of Cambodia for hosting the ASEAN summit, will meet in person with Chinese President Xi Jinping – Russia’s most crucial diplomatic partner. 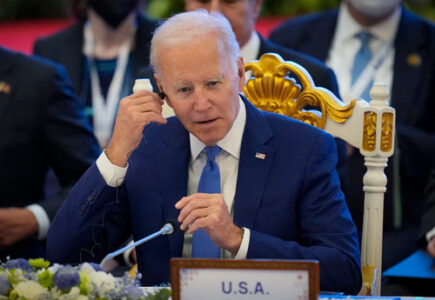 Indonesia, which currently holds the rotating G-20 presidency, has sought to strengthen ties between Russia and G-7 countries, however in the days leading up to the summit, hope was dwindling that the two sides could reach a joint communique.

Ahead of the summit, a Japanese government official told reporters that G-7 nations were insisting on mentioning Russia’s invasion in any communique. While Indonesia was seeking some middle ground, and Japan wanted to support the efforts of the Southeast Asian nation, ultimately the G-7 needed to maintain its principles on Russia, the official said. -Bloomberg

“On this particular paragraph related to war maybe there will be no agreement, but we’re still trying,” said Indonesian Finance Minister Sri Mulyani Indrawati in a Sunday statement to Bloomberg TV, adding that the G-20 can still deliver “very tangible and concrete deliverables” when it comes to things like climate change and Covid-19, even without a joint agreement.

Just give the Biden regime Nazi uniforms and call the mid term elections 😉. Who are the Nazis including USA and WEF RIGHT!!! Hope some are finally figuring out the Deepstate,Washington Beltway.

Ukraine soldiers and US UK regular soldiers pretend dressing as Ukraine soldiers have suffer heavy losses of life because human wave and cannon fodder tactics,sad US and UK will sell their widows and daughters as prostitutes and sex slaves in US and UK lol.

Down with the child dealer pack!

Impossible to conclude a diplomatic agreement with a senile old fool

US and UK have been killing and genocides 6 million of innocent peoples in The Middle East lol.

pavlov lavrov, you are the only commie that can attend the summit for whore of a mother russia.

What sanctions did the world impose on the United States when it INVADED Iraq ???

Yes, who are these G7 Satanists to lecture anyone about morals?

US and UK have been killing and genocides 6 million of innocent peoples in The Middle East lol.

Maybe the G20 could issue a joint statement on the collusion of Russian based oligarchs and the Western enemies?

This is the very reason why diplomatic language is not english, but french.