It was not Covid, therefore the news went almost unnoticed: Japan will release over a million tons of radioactive water from the Fukushima nuclear power plant into the sea. The catastrophic incident in Fukushima was triggered by the Tsunami that struck the northeastern coast of Japan on March 11, 2011, submerging the power plant and causing the core of three nuclear reactors to melt.

The power plant was built on the coast just 4 meters above sea level with five-meter-high breakwater dams, in a tsunami-prone area with waves 10-15 meters high. Furthermore, there had been serious failures by the private company Tepco managing the plant, in the control of the nuclear plant: the safety devices did not come into operation at the time of the Tsunami.

Water has been pumped through the reactors for years to cool the molten fuel. The water became radioactive, and was stored inside the plant in over a thousand large tanks, accumulating 1.23 million tons of radioactive water. Tepco is building other tanks, but they will also be full by mid-2022.

Tepco must continue pumping water into the melted reactors and has decided to discharge, in agreement with the government, the water accumulated so far into the sea after filtering it to make it less radioactive (however, to what extent it is not known) with a process which will last 30 years. There is also radioactive sludge accumulated in the decontamination filters of the plant, stored in thousands of containers, and huge quantities of soil and other radioactive materials.

As Tepco admitted, the melting in reactor 3 is particularly serious because the reactor was loaded with Mox, a much more unstable and radioactive mix of uranium oxides and plutonium.

The Mox for this reactor and other Japanese ones was produced in France, using nuclear waste sent from Japan. Greenpeace has denounced the danger deriving from the transport of this plutonium fuel for ten thousand kilometers.

Greenpeace also denounced that Mox favors the proliferation of nuclear weapons, since plutonium can be extracted more easily and, in the cycle of uranium exploitation, there is no clear dividing line between civilian and military use of fissile material.

Up to now, around 240 tons of plutonium for direct military use and 2,400 tons for civil use (nuclear weapons can however be produced with them), were accumulated in the world (according to 2015 estimates), plus about 1,400 tons of highly enriched uranium for military use. A few hundred kilograms of plutonium would be enough to cause lung cancer to  7.7 billion inhabitants of the planet, and plutonium remains lethal for a period corresponding to almost ten-thousand human generations.

A destructive potential has thus accumulated, for the first time in history,  capable of making the human species disappear from the face of  Earth. The nuclear bombings of Hiroshima and Nagasaki; the more than 2,000 experimental nuclear explosions in the atmosphere, at sea and underground; the manufacture of nuclear warheads with a power equivalent to over one million Hiroshima bombs; the numerous accidents involving nuclear weapons and those involving civilian and military nuclear plants, all this has caused radioactive contamination that has affected hundreds of millions of people.

A portion of  approximately 10 million annual cancer deaths worldwide – documented by WHO – is attributable to the long-term effects of radiation. In ten months, again according to  the World Health Organization data, Covid-19  caused about 1.2 million deaths worldwide. This danger should not  be underestimated, but it does not justify the fact that  mass media, especially television, did not inform that over one million tons of radioactive water will be discharged into the sea from the Fukushima nuclear power plant, with the result that it will further increase cancer deaths upon entering in the food chain. 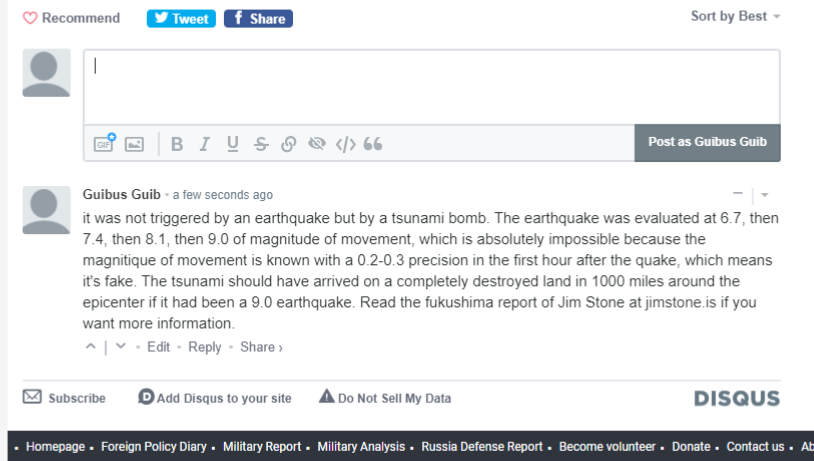 We warned you and people didnt listen.

Therefore we are now releasing 1 million m3 radioactive water on the planet to wake the sheeple up to action against the Clima Change problem, the Terrorist problem, the Green Ecology problem, the lack of Clean water problem and also the Corona Virus problem.

You are crying over all the cancer cases coming? Well YOU caused the problem with your behaviour and refused to do something about it.
You caused it, farting, polluting, diesel driving, overconsuming energy, too many children.

Hisako Sakiyama has a PhD in Medicine and is a Member of the Takagi School of Alternative Scientists, a Japanese NGO established in 1998 to study the environment, nuclear issues, human rights, and other issues in modern society from the perspective of citizens. The School seeks to create ways that scientists and prospective scientists can link their specialized expertise and capabilities with citizen movements. She has been a Research Associate at MIT and worked on cancer cell biology as Former Senior Researcher at the National Institute of Radiological Sciences (NIRS) in Japan. Sakiyama served as a member of the Fukushima Nuclear Accident Independent Investigation Commission (NAIIC), a commission established by the Japanese Diet in 2011. She subsequently co-established the 3.11 Fund for Children with Thyroid Cancer with Ruiko Muto in 2016. As a former member of the Fukushima Nuclear Accident Independent Investigative Commission, Dr Sakiyama continues to be active in sharing her findings, which often contradict those of the Japanese government and its associated scientists’ in terms of their evalution of the health effects of the nuclear disaster, with media and citizens around the world (K.H.).

Hirano: Seven years have passed since the Fukushima nuclear power plant accident. Do you think that the effects of radiation on the human body have decreased since then?

Sakiyama: Although radiation has gone down significantly, there are still many radiation hotspots, such as forests, rivers and riverbeds, and satoyama1, where decontamination is not possible.