According to a fugitive Syrian General, the Syrian government had hidden hundreds of tons of chemical weapons from the OPCW. 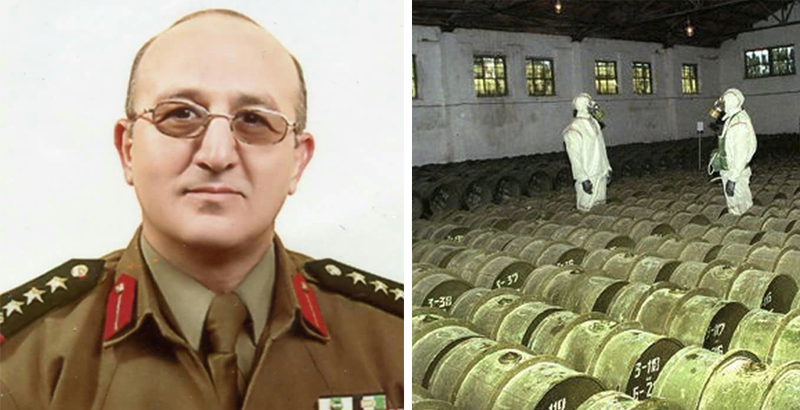 The Telegraph newspaper has published information about chemical weapons of the Syrian President Bashar al-Assad’s regime, provided by fugitive Syrian Brigadier General Zaher al-Sakat, who allegedly had been commanding a subdivision of chemical troops of the 5th Division of the Syrian Army until 2013.

According to al-Sakat, in 2013, the Syrian authorities hid from the Organization for the Prohibition of Chemical Weapons (OPCW) hundreds of tons of chemical weapons. As the fugitive officer claimed, the Assad’s regime had at least 2,000 tons of combat chemical agents, but the Syrian government recognized the presence of only 1,300 tons of such substances.

Al-Sakat said that at least 700 tons of sarin and other poisonous substance, as well as precursors (substances, used in chemical reactions in order to get a target substance), remained at secret warehouses in Syria after the country’s ‘clearing’ of chemical weapons. He noted that these stocks were secretly exported to fortified warehouses in the mountains near Homs and to the coastal city of Jableh, located near the port of Tartus. According to al-Sakat, the Syrian Army still has aerial bombs, capable of carrying chemical charges, and missiles of the Scud class with warheads for chemical charges.

Damascus and Moscow said that accusations of the presence of chemical weapons and means for its usage in the Syrian Army are unfounded. At the same time, the Syrian and Russian authorities have repeatedly claimed that militants of terrorist groups, operating in Syria, have such weapons.

Meanwhile, the Russian Foreign Minister Sergei Lavrov said that Moscow is puzzled why the fugitive Syrian General hid the information about the remaining chemical weapons in Syria for such a long time.

“I have seen reports on the statements of the fugitive Syrian General. They indicate that he fled in 2013. In the same year, the Russian-American agreement on chemical disarmament of Syria in accordance with its accession to the convention on the prohibition of chemical weapons, which was supported in The Hague and New York, was reached,” Lavrov said.

According to the Russian Foreign Minister, “on the basis of this agreement, as early as in 2014, the OPCW received by the Syrian government data on its stockpiles of chemical weapons and verified them in the same 2014.”

Lavrov noted that “the total amount of chemical substances that should have been disposed was 1,300 tons, while the general said yesterday that there were 2,000 tons of chemical weapons.”

“As the figure of 1,300 tons was announced openly, I have a question why the General, if he knew about the 2,000 tons, was silent for three years. Seven hundreds of tons are not a small figure, you cannot hide it in a test tube from under white powder,” the diplomat said.

Lavrov noted that “any person of sound mind understands that this general has been stimulated either with a carrot or with sticks.”

Will remind, on April 4, about 90 people, including up to 30 children, were killed, and some 560 others were hospitalized with poisoning, injuries and wounds, as the result of an airstrike and subsequent chemical contamination of the area in Khan Shaykhun town in Idlib province. The US accused the Syrian government of the chemical attack. The Russian Defense Ministry claimed that the Syrian Air Force bombed a warehouse, where terrorists stored their chemical weapons, and this led to the contamination of the area. Later, Moscow declared that it was necessary to thoroughly investigate what happened before setting out any versions and charges.

On the night of April 7, US Navy destroyers fired 59 Tomahawk cruise missiles, targeting the Shayrat airbase, located about 30 kilometers of the city of Homs. The Shayrat airbase was chosen as a target of the missile strikes, as the US authorities believe that the Syrian Air Force departed from there to carry out its airstrikes in Idlib province.

working for the CIA now is he? Sounds like another curveball.

Not many jobs for outcast generals. Maybe made a few hundred euro’s for this claim which will pay the bills for 1 week.

Guess the euros paid for the hire of the uniform and photo shoot !!

Obviously paid, but the US will probably make a speech about it and then have to be threatened by the Russians again before they run away crying

If you had stopped after “paid” it would have been a good comment.

As always the US allegations of ANYTHING are so extravagant that they belie any common sense. IF this renegade General had said ‘ten 45 gallon drums’ it would have been a case of ‘ well, maybe, maybe not ‘. A few barrels of Sarin would be able to kill a few hundred thousands in densely populated areas, so even IF the SAA wanted to hide some ( which would be 100% insanity) it would have been far easier than hiding many hundreds of tons that could kill many many million’s that all too many would have been aware of and could never have been used effectively anyway due to the ‘excuse’ of launching a nuclear holocaust by US/NATO vampires on ALL the people of Syria.

All the US/NATO obfuscation in attempting to obfuscate the fact that the terrorists dancing around in ordinary clothing pointing to Sarin ‘evidence’ and handling the ‘victims’ without dropping dead them selves in minutes is more US inspired fantasy warfare.

Or to put it in the lexicon that the US Generals and Trump can understand.

” The US is again talking Bollocks “.

It is odd that this general has remained quiet about this stock for all this time. I would think that if they actually existed then Assad would’ve been using some on a regular basis on formations of ISIS and extremists holed up in abandoned villages and hilltop observation posts.

Like those iraqi fugitives spreading BS about Saddam’s chemical weapons.

Of course this is false. If it was true this news would have leaked at least in 2013. The only real fact is that western countries want to avoid a true investigation (with all the parts involved) by OPCW

With all due respect former Brigadier General Zaher al-Sakat, baloney.

Probably Hebrew National – brand Kosher baloney without any fillers or by products. This rat is surely on some intelligence service payroll. Another paid whore.

The same story coming from the same only person was posted on April 29, 2013 at The Middle East Media Research Institute website. If this was true not even a journalist couldn’t bring a proof in 4 years. This is disinformation from MEMRI’s whose main office is located in Washington, DC. which is pro Israel and pro Turkey https://www.memri.org/reports/defecting-syrian-officer-brigadier-general-zaher-al-saket-i-was-ordered-use-chemical-weapons

Obviously he is lying. But more importantly is this… This is not evidence, it is only an accusation is all. Many thousands of times more Americans accuse the US of illegal activity. So if this mans word is to be taken as fact, so then should all of Edward Snowdens words and Ron Paul’s and many ex-CIA officials. DC should be struck by the international community with Clinton and Bush and Obama and Hillary and Trump still in it. The killers are in DC NY Tel Aviv London Paris.

Beware of socalled defectors telling you what you want to hear.

When he stops being a fugitive, then maybe we will start to listen to him.

Obliviously absolute bullshit propaganda. South Front must have either got some money or a threat as it has turned into another US propaganda outlet.

Erm, SF is just reporting the news and it also posts Russian response, certainly much better than any Western msm that only posts one sided stories.

So where is this traitor now, in Britain? Or with ‘FSA’ fighting against the SAA?

Murder Inc (CIA/NATO) has been on overdrive turning over rocks. Look what just scurried out. How much did they pay for that piece of disinformation/misinformation?

Ha what a joke!! The question for anyone who can think is, why he did not say this when he deserted Syria??? Why now??? I guess he has to earn his keep.

Fake General, fake story, and fake UNIFORM !! This is NOT the uniform of a SAA general, but a hilarious mix of British shirt/tie, red collar tabs of a British brigadier and rank stars of a US general !! Obvious hired the uniform for the posed shot, had he wore authentic dress he would be charged with “impersonating an officer of the armed forces” and not just impersonating a Syrian – what a foul traitor to his country this person is. PS Not sure of the origin of the service tunic (Belgian Army ?) and perhaps someone can identify the FSA ribbon decorations he has awarded to himself !

Nice catch! Maybe you can share your expertise & knowledge with SF?

Yeah, they pop up every-time. And new hoghwash sagas is invented dayli. Fugitives from Tunis. From Libya, telling us how “bad” Gaddfy was. From Egypt. In Iraq. And so on, and so on, becoming an mile long stack of bollocks. In Syria, yeah, if lying the first time didn’t go, the lie again, and again, and again.

I dont believe an word of it, because Gas is an idiots tool, and Syrians aren’t idiots, nobody is using gas at an grand scale other than the uISISa, yeah, and of course ISIS, but thats not an crime, just ask Trump, if He has time in-between eating cakes. Yeah we are drowning in bullshit this days.

mmm… Although I am a steadfast defender of syria, and do not believe for one moment that assad had deployed CBO weapons.

What a filthy lying pro-terrorist cunt…. Hopefully someone will put a bullet into the head of this traitor, or preferably three…