The militants launched rockets from the Tal Musaitaba area controlled by the US-led coalition and its proxies east of Damascus.

The FSA claimed that six helicopters at the air base were destroyed as a result of the shelling. However, sources from the Syrian Arab Army (SAA) said that only one out of service helicopter was damaged and a small ammo depot was destroyed. The Syrian Air Force continued targeting the positions of the FSA and Hay’at Tahrir al-Sham (HTS) in the Daraa al-Balad area and the Al-Naziheen camp in Daraa City.

Meanwhile, HTS fighters managed to hit a T-72 tank of the 4th Armoured Division in the Al-Naziheen camp area. Accoording to the Italian news agency (AKI), the Free Syrian Army in Daraa was supplied with attack drones. These drones are controlled from the Syrian-Jordanian border area south of Daraa city and were used during the battles of Daraa city against the SAA tanks. The drones are believed to be the American-made Switchblade suicide drones.

those rockets have done serious damage to the war effort of SAA. they must be found and destoyed at last. their mobility is a problem but its vital to the war.

I remember the scenes of Grad-shelling in Donbass. The launchers change positions very fast , just when the missile leaves the tube , the launcher drives away.

Exactly. Mobile launchers tend to be mobile. There are a lot of them too, because trucks with tubes aren’t really expensive.

it was quite peaceful after SAA outflanked FSA and left at tanf plan to rest, and now the FSA are looking for conflict. Clearly a attempt to draw the SAA into conflict and thus bombing by the US again

Russia should just carpet bomb this FSA territory and tell USA to fk off.

hey Russia you heard the man. wtf are you waitin’ for Lmao.

The US with their US based PMCs acting as the rebels again with their bogus FSA group (Southern Front) . Thi is all brought to you by the Coalition of Resource Thieves ,trying to destabilize the Middle East since 1949 .

Since FSA is in a hit and run mode, why is the front line inverted towards the airfield that was attacked? Grad rockets have a range of 20 Kms, the front line should be 30-40 kms from the airfield, otherwise do not make your equipment succeptible to easy attacks. 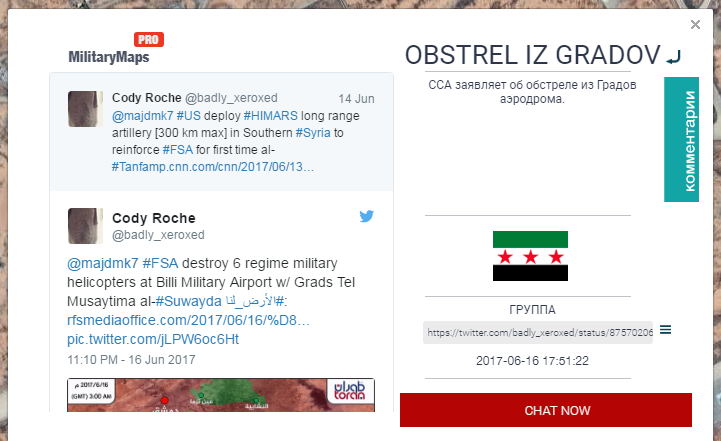 Guessing speculating on source of attack 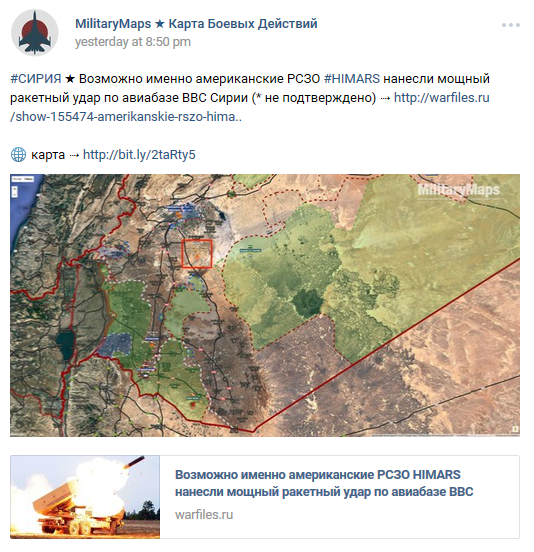 Possible. But even much older artillery can be devastatingly accurate these days thanks to drone reconnaissance.

Amazing how much freedom of operation the pentagon has given itself in syria without a legal declaration of war.

FIND WHERE THE ROCKETS ARE COMING FROM AND FRY THE FUCKERS TO HELL!!!!

To end this war FSA must be attack and dismantle.Their are saboteurs of Syria and breading elements of ISIS.Their FSA is ISIS created by USA and Turkey to steal oil and gas on behalf of Sunnis only.

Russia must locate this missile launching points and destroy their have the capacity to do that.This is definitely himars USA missiles launch by USA and Russia is aware.WW3 of not attack is it only Russians who should avoid WW3.Fire to fire We don’t have respect for Jesus the God but only for mankind who doesn’t have a everlasting life.Suppress USA goals Russia and the USA=satan will depart and peace will come to Syria for Syrians not ISIS or FSA.

FSA and USA same goal regime change and stealing oil and gas for USA,Turkey and Saudi allahdevil king sitting on gold,oil and us dollars.

One day, those launchers will disappear. It will come at a time of choosing, not one driven by reaction. The fact that they used them for the first time to my knowledge to an, eh… so what effect, tells a lot. Now everybody knows they are out there and will be looking for them. A good day to all.