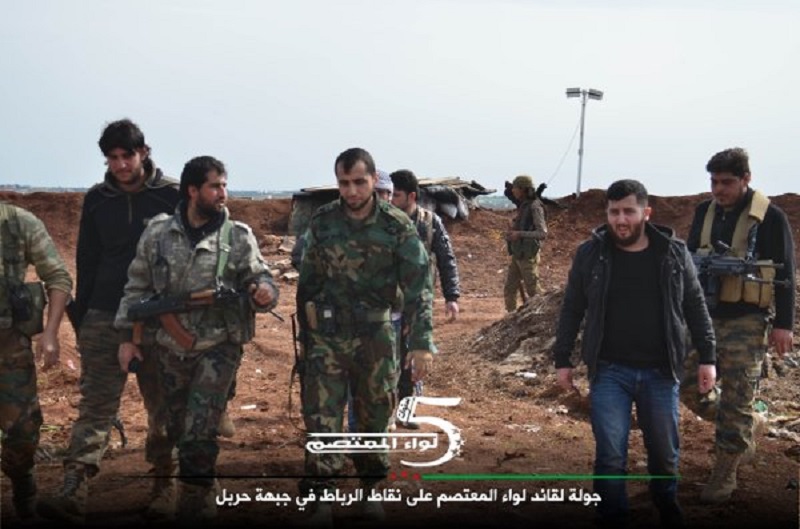 On Sunday, the head of the political office of Liwa’ muetasim, Mustafa Saijari, denied that Liwa’ muetasim handed over any of its positions around Mara’a village in the norther Aleppo countryside to the Russian Military Police.

Liwa’ muetasim is one of the major Free Syrian Army (FSA) groups operating within the Turkish-led Euphrates Shield Force in northern Syria.

Some pro-government sources have claimed that Liwa’ muetasim and other FSA groups will hand over its positions on the Azaz-Aleppo highway and around Mara’a village. According to the reports, the aim of the deal is to open a direct road from the government-held area to Tukey in order to pressure the Kurdish-held Afrin city.

Although the Russian Military Police didn’t take any positions from the FSA, it did deploy in many areas controlled by the Syrian Democratic Forces (SDF) around Afrin in the last few days.

The Russian Military Police was deployed in Afrin area mostly to de-escalate the situation between the SDF and the Euphrates Shield Force. It’s in the Russian interest for sure to keep all sides in Syria focused on fighting ISIS and al-Qaeda.

I have one of those strange feelings, that the Kurds are switching sides.

If you say so.

I am not saying anything.

It would puzzle me to see Russians on FSA held area’s.

Fair play. I seem to be getting a lot wrong recently. Apologies.

Nope. To Russia and Syria (or for Iraq, their government), and yes, I know how stupid that sounds.

That would be the most intelligent thing that FSA and SDF could do. However, these are new USA puppets, and I do not think USA allows them to do this since USA and Israel do not want to see Syria recover from war and with the same land it has before.

But Syria will recover and become stronger. Before they both self-destruct (USA and Israel) , I would hope that their last vision is of Iran / Russia / China / Syria kicking their Yank and Israli arses.

Russian military in FSA held territory seems unlikely. What would FSA gain in the present situation? They are under full turkish control and some Russians would not aid them in anyway.

For a direct road between SAA held territory and Turkey, why would they want that as their aim is to replace Assad?

It would only make sense not if SDF would change side to Russia (it does not have to as SDF position is not against Russia at all), but it would make sense if FSA were to change sides, towards SDF. I consider that not as highly likely though there have been signs from SDC, FSA political umbrella, that they would like to join an advance on DeZ. All in all, it makes for ever changing puzzles.

Cheers SAA for hopeefully opening the road from your position to the Turkish border! Good plan!

This is just smoke by all the parties involved , the Kurds don’t like going through the government check stops because they get caught most of the time, breaking agreements as usual.