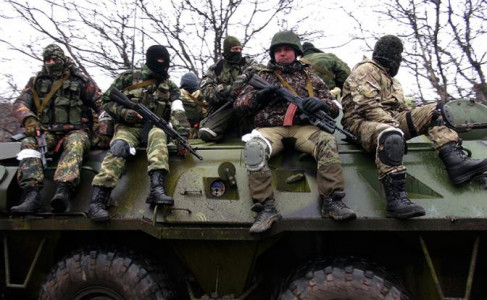 Original written by Dmitriy Rodionov and published by Svobodnaya Pressa; translated for SouthFront by J.Hawk
The popular German journal Bild known by its pro-US position published material on Monday claiming that Donbass militiamen are shifting their activities to Syria, now that the Donbass is relatively calm. Whereas in Syria there is serious fighting.
Bild supposes that their departure for Syria to fight ISIL (IS) is the best possible employment for militiamen who were opposed to the Minsk negotiations and the ceasefire.
Ukrainian military circles, in the Bild’s view, believe that “the level of adherence to the ceasefire since September 1 is directly related to the fact of Russian troops’ presence in Syria.”
Bild also cites “authoritative statements” by Petro Poroshenko and the former Donetsk Region governor Sergey Taruta who “currently has very good contacts in Donetsk, has his spies on occupied (sic) territories.” Taruta confirmed that, according to his information, “the militants (sic) are moving to Syria because they can earn more money there.”
The authors of the article even drew a map of possible routes by which “Putin’s militants” are going to Syria:  by sea and by air.
In recent days, Kremlin has had to dispel particularly frequent reports that Russian troops are beginning to participate in the armed conflict in Syria on the government’s side. Moscow underscores that Russia is not about to increase its military presence in that country or in the Middle East in general.

However, world media are running more stories every day about Russian troops and equipment going to Syria.

In early September, the president’s press secretary Dmitriy Peskov answered reporters’ questions concerning the transfer of army units to the Middle East by saying: “One should not believe these stories.” In his words, the topic of sending a Russian military contingent to Syria was never even discussed, and Syria’s president Bashar al-Assad did not ask Vladimir Putin to send him military formations as support, including aviation units.
Nevertheless, the mass information assault is continuing. And now the Russian soldiers have been joined by Donbass militia.
Publicist Yegor Kholmogorov believes we are dealing with a complete fabrication.
–Most of the militia went to fight for the Russian people, and are quite indifferent to Syria’s interests.
Svobodnaya Pressa (SP): Kiev believes that “the level of adherence to the ceasefire regime and the presence of Russian troops in Syria are directly correlated.” What is it really correlated to?
–The lowering of tensions on the Donbass is associated with the intensive pressure by the EU on Kiev, accompanied by Moscow’s moderate diplomacy which is not naming any offensive targets and is constantly swearing by Minsk-2 and Donbass being part of Ukraine. However, if specific provisions of Minsk-2 are not implemented, including transfering border control to Ukraine, this lowering of tension is not advantageous to Kiev, since the freezing of the conflict facilitates the ultimate loss of the Donbass by Ukraine.
The assurances by Ukrainian pseudo-experts that the calm is caused by Russian forces’ departure to Syria only reveals their clearly inadequate understanding about the quantity and quality of Russian troops who are capable of waging two hybrid wars simultaneously. The moderation of Russia’s actions in Ukraine has political, not military, motives.
To cite Taruta is to lose all self-respect, believes political scientist Vladimir Kornilov.
–If you recall, this individual said the following about a year ago: “Russians don’t fight in winter,” which was meant to indicate there would be no combat operations before the Spring. As to his “awareness” of some “militants” going from the Donbass to Syria, it is clearly in the “I overheard something” category.
SP: What will happen with battle-experienced people in the event the Donbass war ends?
–I believe the answer is clear. DPR and LPR citizens will join the force structures of these republics, and Russian citizens the force structures of Russia.
SP: Taruta confirmed that, according to his information, “militants are moving to Syria because one can earn more money there.” So he is saying the militia are fighting for money and not ideas? Are there people like that, and how many?
–Well, Taruta is probably drawing his conclusions based on himself and on those Nazi battalions which he financed (it’s no secret he was one of the main sponsor of the odious Azov). Taruta can’t simply imagine how anyone can do anything except for money.
I believe Putin already gave a clear and unambiguous answer to the question concerning Russian troops in Syria. I have nothing to add. As to the question “what for?”…Russia is strongly interested in destroying ISIL. Everyone is screaming they overheard Russian speech among Syrians. But everyone forgot that Russian speech with a clear Caucasus accent could also be heard in the video of the first public executions performed by ISIL, by Caucasus expatriates. Even today they are proclaiming Russia their main enemy. It’s terrible to imagine what would happen if they win in Asia and go off to avenge themselves on their main enemy (many of them are already doing that).
As to Russia’s current activization in the Middle East, it probably gives Russia additional trump cards in its difficult transaction concerning Ukraine. There will be haggling, and it will be difficult.

Rossiya Segodnya political observer Rostislav Ishchenko also does not view the sources of this information as trustworthy:

–Russia is sending weapons and advisors to Syria. And it is not hiding it. In accordance with accepted practice over the last century, military advisors may occasionally take part in military clashes, but that’s an exception, not the rule. Moreover, Russia has a large naval base in Syria and is expanding its naval presence in that country. Which means that the base needs air defense cover and a limited ground contingent. If the base is threatened, they may be drawn into combat. But right now that’s a remote prospect.

SP: How closely are the Syrian and Ukrainian issues connected, considering the recent increase in tensions between Russia and the West? To what extent does progress in one area influence the other?

–They are tightly connected, just as they are connected to the 2008 Georgia war. In all three cases the US, attacking Russian allies or Russian periphery, was aiming at Russia. In practice, all of this is one big Russo-American war, waged by modern means. Moreover, there are no systematic US-Russian negotiations. The steps taken by Washington can only be interpreted as occasional US survey of Russia’s readiness to make concessions. They are realizing Russia is not prepared to make concessions, and therefore they are raising tensions.

SP: Bild supposes that the departure of militiamen for Syria to fight ISIL is the best occupation for those who are opposed to the Minsk negotiations and Donbass ceasefire.
–There is no stable peace on the Donbass. The US can’t agree to it and, therefore, neither can Kiev. Russia is using Minsk-2 in the same way as the EU in order to limit US influence in the crisis. If the EU doesn’t follow suit, it’s the EU’s problem. That’s no cause for joy, but at least there will be certainty. It will become clear that not only Ukraine will vanish in the foreseeable future, but the EU as well. But right now there is a chance for the Russo-Franco-German partnership to help the EU develop a new sovereign position in the Ukrainian (and Syrian) matter, so the “Minsk dances” will continue.