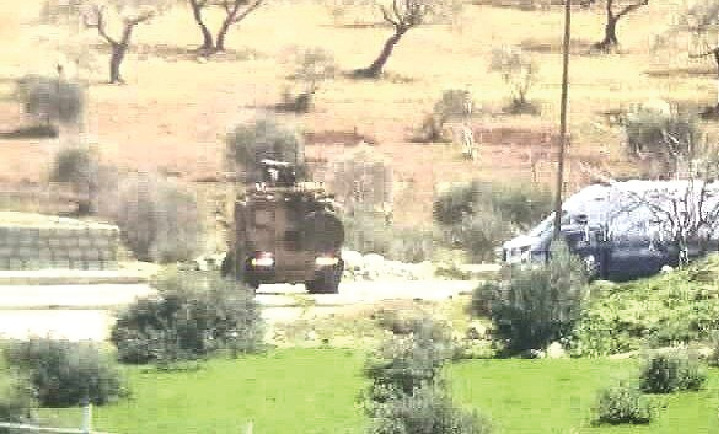 On March 13, a convoy of the Turkish Armed Forces came under attack in the northwestern Syrian region of Greater Idlib, where many al-Qaeda-affiliated groups are roaming free.

According to local sources, the convoy was moving on a road in the southeastern outskirt of Idlib city when one of its vehicles was struck with an improvised explosive device. Turkish forces quickly sealed the attack scene. Turkish forces allegedly suffered casualties as they carried out a security operation.

The Turkish Ministry of National Defense has not commented on the incident yet. The ministry usually acknowledges any fatalities in Syria within 24 hours.

Currently, thousands of heavily-armed Turkish troops are deployed in more than 60 posts and bases across Grater Idlib. The region is, however, controlled by the al-Qaeda-affiliated Hay’at Tahrir al-Sham (HTS).

The attack near Idlib city is the most recent in a series of operations against Turkish troops in Greater Idlib. A number of newly-founded al-Qaeda-inspired groups claimed responsibility for some of the recent attacks.

Turkish forces have been shielding HTS and other al-Qaeda groups in Greater Idlib from Syrian government forces and their allies for over a year now.

Despite the increasing attacks on Turkish forces in Greater Idlib, Ankara remains committed to its support to militants. Recently, the Turkish militantly began a redeployment process in the region to improve the security of its troops.

Whoever did this knew the convoy was Turkish troops. Unless their education was so bad that they don’t know one flag from another.

It does seem that the Turkish admin need to go back to the drawing board as the current ‘redeployment process’ is working. Could it be that things aren’t so rosy in the Turkish controlled Idlib garden?

The Turkish admin should move over and let the Russian/Syrian admin do the work of clearing Idlib.

I did not see any flags. Please help.

There must have been some form of distinguishing these vehicles from other military vehicles. It was a convoy which suggests more than two vehicles. A military vehicle not displaying any insignia is asking to be attacked by someone.

Perhaps a series of Blue on Blue attacks will give Erdo a vaid reason to abandon Idlib? There is little there for ‘Erdo Inc’ to loot anymore anyway.

Try to think for a moment of the poor NATO soldiers who have to deal with those ugly beasts, or even die to defend those who would kill them quickly and brutally if given the chance, all to satisfy the evil aspirations of fat Jewish bankers, sitting comfortably in their studios in NY or London and trading, earning a lot of money and not giving a damn about who dies for them.

Quite fanatic expressions,ı hope syria will get worse especially animal assad and his supporters.Though they are already in hell.Justice for all.

same goes for you chump or anyone who wishes same for my country especially in south-front..you can rot in hell(with your families).

You still have to leave from Syria , Cyprus , minor Asia , Konstantinupolis, Libya and everywhere else your filthy foot stands . And still must go to hell.

saem for you and your family.

You are thieves. You have never created something . You are only stealing . Your family and your nation is cockroaches from Mongolia.

ı am done with sf but ony ı will reply for you only… ı hope you will be nuked by usa ahahahahahahahaah….. ı hope syria will be dissolved. lmaoooooooooooooooo

At first i am glad you are done with sf we will not miss you and its an honour for me that you are replying to me only…lol. Syria Iran Hezbollah Greece are your worst nightmares. And you just show what are your real beliefs.

ı would be insulted if you miss lol cheap disinformation forum,any sane person is leaving seeing how pathetic liars you are..kisssing eachothers butt..all the countries ı mentioned are snowflakes-cowards like you… ı hope you and the other animals rot in you know where… keep fooling yourselves by upvoting eachother with zillion alt-accounts. ı was humiliating you to be honest not replying.Yes finally it is my last response,you are boring one liner.

One terrorist attacking another, keep up the good work ;}

These are both terrorist factions and criminal syndicates – of course some are going to fall out with their Turkish military patrons, over competition for control, and of criminal enterprises, within terrorist occupation zone of Idlib.