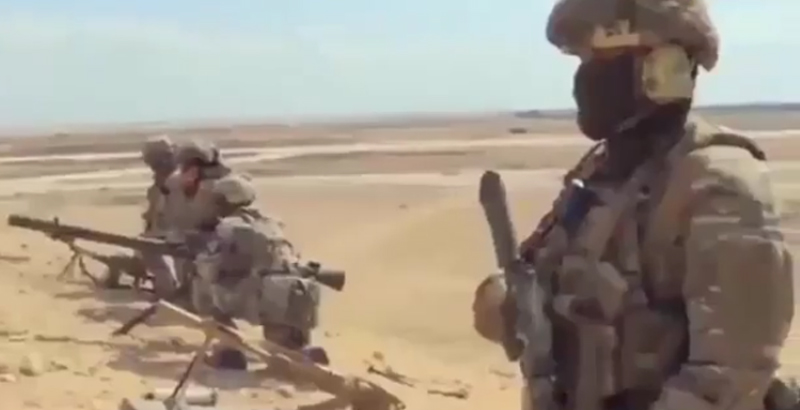 The Russian Federal Security Service (FSB) has published a video, showing the Russian Special Operations Forces, operating during the liberation of the Syrian city of Palmyra.

The one-and-a-half-minute video includes scenes of destruction of terrorists’ infantry and vehicles, equipped with weapons, hitting of a bomb-laden vehicle with a guided missile, fired from a portable system, support for a ground operation, provided by attack helicopters of the Russian Aerospace Forces, inspection and demining of facilities, cleared of terrorists.

On March 2, the Syrian Army and militia units regained control of Palmyra. The liberation of the city lasted one and a half months, militants fiercely resisted – terrorists of the Islamic State (IS) group from Mosul and Raqqa were dispatched to Palmyra. Thousands of militants were killed and wounded during the battle. The terrorist group also lost 19 tanks, 37 armored fighting vehicles, 98 pick-up trucks, equipped with heavy weapons, and more than 100 vehicles.

“The operation to drive terrorists out from the city was planned and conducted under the guidance of Russian military advisers. The Russian air power and Special Operations Forces made a decisive contribution to the defeat of militants in the area of Palmyra,” chief of the Main Operations Directorate of the General Staff of the Russian Armed Forces, Colonel General Sergei Rudskoy, said.

Not only aircraft, but also the latest Ka-52 attack helicopters, which have demonstrated high efficiency in the mountain wilderness, were used against terrorists. At the same time, heavy weapons were not used in the historical part of the city in order to preserve objects of cultural heritage.

Cool video, I liked seeing the ground attack aircraft flying in formation as well as the use of precision bomb strike. Hmm… were those cluster bombs at the 20 second mark? I think that there is a place for cluster bombs, especially in an open desert against infantry, just curious.

I thought the Russians were switching over to using large explosive bombs that detonated above the ground with a proximity fuse. That would be more effective against infantry and not leave behind any unexploded ordnance.

Russians have the best aircraft. And now special forces on the ground actually fighting not just training and advising. No wonder palmyra was taken so quick after advancing at the palmyra triangle. That was quicker than the isis surprise advance in december. Now dear mr putin, deploy them spetsnaz to idlib and south/ west aleppo!

Very good effort by Russian special forces and great job done! Great shame there were some losses. So far Russian – Syrian strategy is working well in a very complicated political and military situation. This speaks volumes for, in particular, Russian generalship.