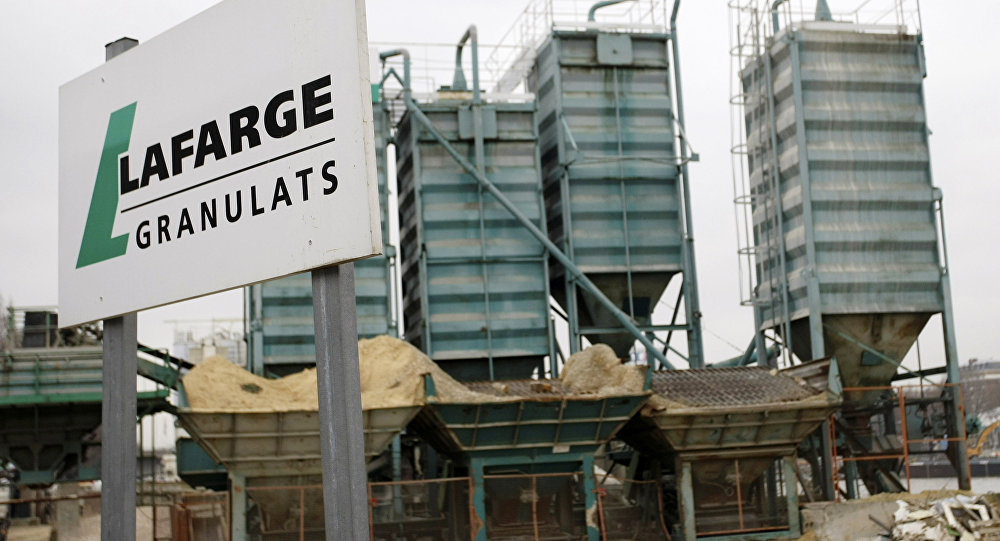 The company said it had funded the militants in order to ensure the security of its employees at a plant in north-eastern Syria, according to Le Monde newspaper.

“It appears from the [internal] investigation that the local company provided funds to third parties to work out arrangements with a number of these armed groups, including sanctioned parties, in order to maintain operations and ensure safe passage of employees and supplies to and from the plant. The investigation could not establish with certainty the ultimate recipients of funds beyond those third parties engaged,” the company said in a press release.

According to the document, the branch management seemed to have acted the way they did hoping to protect the company and its employees, although “in hindsight, the measures required to continue operations at the plant were unacceptable.”

In June 2016, Le Monde said the Lafarge cement factory indirectly financed Daesh (outlawed in Russia) between spring 2013 and September 2014: the board paid taxes to Daesh jihadists, who had captured neighboring towns and roads, to ensure the enterprise’s work during the Syrian war.

Since 2011, Syria has been engulfed in a civil war, with government forces fighting against numerous opposition and terrorist groups, including al-Nusra Front and Daesh, banned in a range of countries, including Russia.

No one is surprised. All the corporations are indirectly at this. Slavery and terrorism are their main methods of keeping their monopolies. United Fruit Company in South America anyone?

What is so wrong about this? The Syrian government has deals with Daesh and other rebels too about supplying oil, electricity and water and about maintaining installations.

Those are unproven allegations. The country of France is a declared enemy of Syria. It is entirely plausible that French and Nato intelligence used this company to launder money to the terrorists.

There’s a difference between bribery to ensure the safety of employees and operations and outright support. In this case the company paid bribes so it’s employees continued to work and production continued. If the cement was supplied to government areas and the employees were able to feed their families what’s the big deal?? It’s not outright support , more like a case of bribery and extortion from the militants to me. It just goes to show that the opposition in Syria is a bunch of thugs killing for profit. No democratic struggle here just criminal elements destroying a sovereign nation.

France has sought to reclaim some level of its colonial mandate over Syria – via NATO support of proxy Islamist’s to overrun and unseat the state government. So given the state policy, it’s hardly surprising French corporate sector has engaged in similar activities and share same overall view of appropriate behavior in sponsoring Islamists. Nothing will happen to this company, they will not face any prosecution or sanction, they merely acted in localized manner mirroring the state’s activities.