French President Francois Hollande said that he regrets the sanctions against Russia and the deterioration of relations with the country. 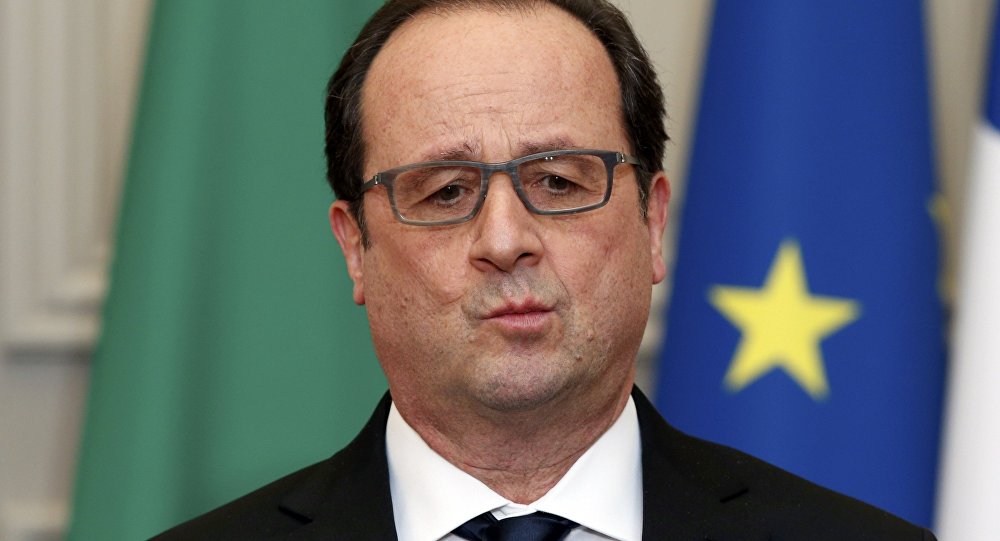 French President Francois Hollande said that he regrets the deterioration of relations with Russia. According to him, the lifting of sanctions is a general interest.

“Ukrainian crisis has influenced relations between Russia and European countries. In my opinion, the situation is regrettable because it is harmful to all sides, in particular, to joint economic projects, due to the sanctions. For this reason, we all are interested to find the best way out of this situation as soon as possible,” Hollande said, speaking to ambassadors at the annual conference of the French Foreign Ministry.

The politician noted that relations between France and Russia have always been close and reliable.

Hollande also expressed a hope that the high level of relations can be restored, noticing that Moscow must responsible approach to the resolution of crises, in particular, in Syria and Ukraine. According to the French President, he hopes for an early resumption of discussions in the Normandy format.

Relations between Russia and the West soured due to the situation in Ukraine. At the end of July 2014, the EU and the US imposed sanctions against entire sectors of the Russian economy. In response, Moscow restricted import of goods from countries, supporting restrictions.

According to the Minsk agreements, Kiev had to hold a constitutional reform before the end of 2015. Decentralization and adoption of a law on the special status of some districts of Donetsk and Luhansk regions were supposed to become the main elements of the reform. However, Kiev has not yet fulfilled this part of the agreement.

The Kremlin representatives believe that it is an absurd to link the Western sanctions with implementation of the Minsk agreements, since Russia is not a side of the conflict and a subject of the agreements on the Ukrainian settlement.

Sanctions must remain on Russia until Russia finally behaves in a respectable, democratic manner.

1. Return Crimea to Ukraine against the wishes of the residents.

2. Remove Assad from Syria and force the Syrians to live under the newly established Rebel council of Jarabulus without an election.

3. Help the Ukrainian military to forcefully occupy eastern Ukraine so that reprisals can immediately be taken against the population of eastern Ukraine with no guarantee of stable governance.

I really hate these smug, western Europeans, U.S. State Dept, and Australians, do they ever follow through the logical conclusion of their own arguments when they pontificate about promoting democracy?

Hello chris. I resepectfully disagree on your points but, I hear you on your question. My opinion on what goes on with the politicians is that things like real freedom, real democracy are almost never in the cards held in their hands.

Money or gain for them personally or their group is what drives decision making. For instance, Here in Brasil they would use exremely large amounts of public funds to spend on projects, in order to steal 1 or 2 percent of the project value for themselves. It was an incredible destruction of the country’s resources. That is why millions of people went into the streets and the President Dilma is about thrown out; maybe by tomorrow.

The Western leadership is crazy. They know only habits which double talk and lead to ever more violence to humanity. Have a great night. :)

I am fine with you disagreeing with me. I just want to make sure that you understand what I was saying. I was being sarcastic.I was criticizing Hollande’s moralizing.

In this article, Hollande is talking about Ukraine but I have heard his past statements on Syria. Hollande demands that Assad has to to step down. This is wrong. Who is Hollande to force the Syrian people to live under a new government backed by foreign powers?

Hollande should be pressuring Ukraine to do these things; not lecturing Russia about implementing the Minsk protocol.

chris, thank you very much. I was completely in error in understanding the meaning of what you posted. The time you took to post back to me is greatly appreciated. :)

you are FULL OF SHITTTTTTT HANG YOUR SELF

Don’t get your panties in a knot. He is being sarcastic.

This is just stupid , what can russia give to france ? allying with america will make france great again.. and french govt should heed the directions from US state dept , and continue the sanctions.. meanwhile they should work preparing NATO invasion force , to gain russia’s resource and land.. after all , russia is so big they wont need that much land themselves … whats better way to the western world than having more land and resource to exploit ?

either russia give away it’s land to western interest , or they should be invaded and occupied ..

western nations are alliance of the good people , and russia / china / iran are full of evil people.. good guys always won , or at least in the movies..

And they said comic books and disney couldn’t take the place of a good education.

france can just shut up and follow american orders… unless they want US Justice Dept to investigate french banks.. they are serving under US , and they will follow US diktat or be punished..