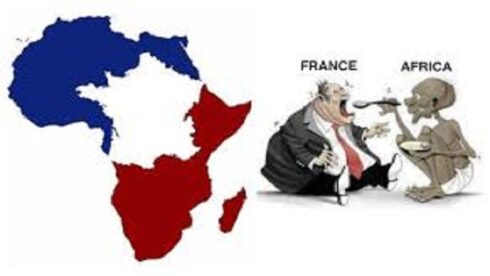 Although Brussels tries to push the narrative that European colonialism is a thing of the past, the harsh reality is that this isn’t only false, but it couldn’t possibly be further from the truth, as it is inextricably linked to the very foundations of the EU.

European colonialism and the exploitation of the world, particularly the Global South, are hardly breaking news. Countless countries and societies around the globe have suffered as a result of these disastrous imperialist policies. However, perhaps the worst example of this happened in Africa. To make matters worse, the same colonialist legacy persists there to this day. The people of Africa have suffered (and continue to suffer) under the jackboot of Western neoliberal “freedom and democracy”, resulting in most people there living in abject poverty. The principal reason is none other than the political West, with its parasitical policies, invasions, (neo)colonialism, currency dominance, etc.

In recent months, particularly since Giorgia Meloni became Italy’s Prime Minister, there has been an ongoing spat within the troubled European Union. This is especially true when it comes to Italy and France. An old video, apparently made three years ago, shows the new Italian Prime Minister openly saying that European colonialism is certainly not a thing of the past and that it’s still very relevant, only this time it exists within the neoliberal policies of the political West. Meloni explained how the EU approach to mass illegal immigration is directly tied to these policies. The bulk of the votes which got the new Prime Minister elected were the result of widespread frustration of the Italian people with the mass immigration. Due to its relative proximity to North African coastal areas, Italy has borne the brunt of this, causing a plethora of issues that only piled up on top of the already existing domestic problems.

Meloni directly exposed the way in which France still exerts neocolonial control in over a dozen African countries. With nearly all of them being direct French colonies in the past, the 14 West African nations are still using the CFA Franc, a colonial currency issued by France. The video “suddenly” resurfaced at a time when Paris and Rome are in the middle of a major row over the latest attempt by the French government and media to portray the Italian Prime Minister as some sort of a “fascist” because she refused to allow more illegal immigrants to reach the shores of Italy. In one particular case, a boat loaded with immigrants had to be rerouted to France as the French NGO taking part in this was denied entry by the Italian authorities.

The French government took the incident so seriously that their Interior Minister Gérald Darmanin went as far as to designate Italy “the enemy of France” over the issue. Such rhetoric shows just how far the fracturing of the EU has gone in recent years, but especially in recent months, when approximately half a dozen European governments fell as a result of the EU’s suicidal subservience to neoliberal policies. The timing on the video of Meloni’s exposé clearly indicates this was a counterattack on the French government’s hypocrisy. Under the guise of alleged “humanitarianism”, the French authorities have been exposed as nothing more than perpetrators of neocolonialist policies whose sole aim is to exploit hundreds of millions of people in the aforementioned African nations.

The CFA Franc Meloni mentioned is indeed a way for France to continue extracting wealth from West Africa through monetary control. Although Brussels tries to push the narrative that European colonialism is a thing of the past, the harsh reality is that this isn’t only false, but it couldn’t possibly be further from the truth. Neocolonialism is inextricably linked to the very foundations of the EU. The CFA Franc is just the tip of the imperialist iceberg that the troubled bloc (in this case France) continues exploiting to the benefit of its massive bureaucracy. For decades, the CFA Franc has almost never been discussed in public. Even after the euro was adopted in the EU, France made sure it never became a central topic. However, the harsh rhetoric by the French government made the new Italian Prime Minister angry enough to make it a global issue in a little over a one-minute video.

The French mainstream media, including well-known outlets such as Le Monde, were quickly instructed to fire back at Meloni. However, the attempts to discredit the new Italian Prime Minister failed as France is still effectively in control of the economies of 14 West African nations. Le Monde tried to debunk Meloni’s claims that mass immigration was tied to the CFA Franc by stating that most illegal immigrants are coming from North African countries. However, the authors failed to mention that those immigrants actually moved from the aforementioned West African “former” colonies of France. Thus, Meloni’s claims are essentially true, as the French exploitation of these countries results in abject poverty, forcing the populace to leave due to economic instability.

The same could be said for most other cases of European (and generally Western) corporate interests across Africa. The continent is by far the most exploited part of the world, resulting in disastrous consequences for the people living there, eventually forcing them to leave and migrate elsewhere. Although migrations are a natural process, the harsh reality is that most of the ones happening in our world nowadays are the result of neoliberal imperialist policies aiming to turn the immigrants into modern-day slaves. If they aren’t working for the imperial metropolis in their own home countries, they will be doing it by emigrating and then doing jobs that the domestic population of the imperial metropolis doesn’t want to do. And the vicious cycle continues. It’s time to put a stop to this and the new multipolar world is the only viable alternative to it.

It is a thing of the past, if Afircan nations can’t govern themselves without internal corruption its their shit, and those that still have some relations with EU and decide not to will be swiftly replaced by china, wchih will completely ans utterly annihilate everythign in its path with complete disregard of anything living let alone the notion of human rights.

At least Europeans hire Africans to work, chinese will only hire chinese imported from china.

I think africa will founder out on its own shut here in the next 10 years foreign aid or no.

Africans are more like native Americans and have had a parallel culture to Europe for thousands of years. A manged hybrid system of their own could bring them foreword and improve their lives rather than simple exploitation by the French and many others..