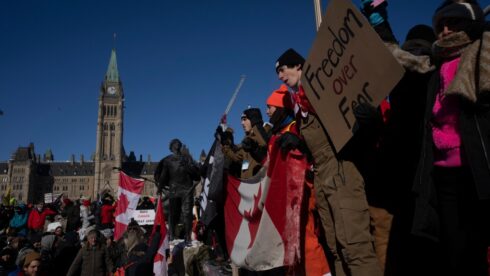 Written by an eyewitness in Canada exclusively for SouthFront

Saturday (February 12) morning here in Montreal was a cloudy day with the threat of freezing rain and snow later in the afternoon as the temperature was to drop from 2 degrees C to -19 C. Not as cold as in Ottawa in the first days of the protest.

When we arrived, my friend and I ended up in the counter-protest by mistake and the people were nice enough to let us know that the pro-convoy protest was further ahead! There were no harsh words, everything was done respectfully.

Once we have reached the Freedom Convoy march, the crowd was around 4,000 people and we were here to support those that were leaving for Ottawa after our march through the streets. Many passing cars and pedestrians were cheering us on. I have not seen so many Canadian flags in this French speaking province in a very long time. Young families with small children came in droves and were seen opening their doors to cheer. Police presence was high at the back of the marchers and were blocking traffic so we could cross the roads safely.

The speakers included the organizers, community leaders and the leader of the political party PPC (People’s Party of Canada) to great cheers from the crowd.

The focus of this convoy was the children as they are the most affected by the lockdowns, restrictions and mandates. There was the extremely sad story of a 5-year-old boy who threw himself from the 3rd floor of his school because he couldn’t take the restrictions anymore. Luckily, he survived but just to think that a child was pushed to such a state of mind was, not only mind-boggling, but horrendous. It was the most heart wrenching story I have heard of this past two years of restrictions. A convoy is being organized this coming Friday to cheer the little boy with all the big trucks to pass in front of his home to cheer him up.

A swimming instructor was telling how it is not normal that children were not interested in doing any activities and she was having a hard time accepting this. The governments that have imposed these restrictions do not realise the damage that they have caused the children. There is no reason to keep these restrictions. Here in the province of Quebec, we had many curfews, and the so-called authorities always called them just before the holidays so that families could not meet and enjoy the company of their loved ones. More cruel they could not be!

Many in this province divide their time between Ottawa (2-hour drive from Montreal) and Quebec City (3-hour drive from Montreal) and there are many truckers protesting in Quebec City (as in many provincial capitals) which is just as noisy but the police are rather more strict and less friendly than the Ottawa police and all the other forces that were sent there to support them.

This movement is growing, there is no letting up. Enough is enough! FREEDOM!

Truckers trade association came out on Friday denouncing the protests claiming that 95% of Canadian Truckers don’t support the demonstrations and most are pissed that they are associating demonstrations with their industry.

They tried to demonstrate here but cops set up road blocks along all routes into town and checked manifests. Any trucks that didn’t have business in the city were turned away … funny thing was the only trucks trying to enter the city to demonstrate were rentals.

They did have their demonstration however … about 100 people … the same 100 or so people that have been demonstrating every weekend for the last 2 years.

Last edited 4 months ago by Ulf the persistent
-7
Reply

Schadenfreude
Reply to  Ulf the persistent

Are you paid to write all this crap? You should be if not.

Ulf the persistent
Reply to  Schadenfreude

Thank you … I do write well.

Article just came out in the CBC. turns out I was wrong there weren’t hundreds of people … turns out there were 70 out of a population of 777,000. A real groundswell of support there.

Earthrise
Reply to  Ulf the persistent

CBC, you mean the left-wing public broadcaster echoing the mainstream media line? What is your interest in minimalising the impact of freedom protests?

Ulf the persistent
Reply to  Earthrise

First I was in Fredericton … I saw what happened and the CBC’s reporting is honest.

Second. My interest is in protecting our health care system. When these idiots who won’t wear masks or get vaccinated get sick who do you think pays for it? It sure as fu@k ain’t them.

95% of us understand that wearing masks to help limit the spread of disease protects our weak and elderly neighbours at virtually no cost other than a little bit of discomfort.

At least 70% of us are literate enough to understand that while vaccines can cause problems in some people these side effects are far less dangerous than letting the virus spread and mutate freely in the wild.

5% are selfish idiots convinced by people like Ezra Levant that they are Che Guevara freedom fighters when really all he’s doing is manipulating them into undermine the Trudeau government on behalf of the Conservative party.

The ICU’s here are at the breaking point. People are having to wait years for surgeries. Irreplaceable doctors and nurses are exhausted, burned out and quitting. I’m no fan of woke politics or the Trudeau government however there are times when societies have to put politics aside and pull together and this is one of them.

There is no evidence that masks and vaccines are working. They are doing it for business.

Now that a state of emergency has been declared, this smells of a set up to me.

Whats the difference between the nazis driving the truck and the nazis around trudeau? NONE whatsoever!

This stinks of old lobster that been sitting in a car all of july.

So to be clear you’re saying that the trucker thing was a government psy-op used to give Trudeau an excuse to evolke the war measures act?

I have a hard time swallowing that. Politically it doesn’t make sense. The declaration of martial law will be ammunition used against Trudeau in the next election. Occam’s razor applies here.