Several groups of the Free Syrian Army (FSA) in Daraa governorate are preparing to launch a large-scale military operation against the ISIS-affiliated Khalid ibn al-Walid Army in the western Daraa countryside, the Syrian pro-opposition news outlet Enab Baladi reported on May 16.

An unnamed source in the FSA told the news outlet that “a large number” of FSA fighters will participate in the upcoming military operation that’s aimed at eliminating the Khalid ibn al-Walid Army. However, the source didn’t clarify if the operation is expected to be backed by the US-led coalition or Israel.

In December of 2017, Syrian opposition sources reported that Israel will support a military operation of the FSA against the Khalid ibn al-Walid Army. On February 1, the operation was indeed launched and the Israeli Army hit several positions of ISIS in support of the FSA.

However, the FSA attack ended within a few hours and no real ground attack was launched. Back then, Syrian pro-government activists suggested that the attack had been nothing more than “a scheme” of the FSA to receive money and weapons from Israel.

During the months following the FSA failed attack, the Khalid ibn al-Walid Army launched more than three hit and run attacks on the FSA positions in the western Daraa countryside. According to opposition sources, more than 100 fighters and commanders of the FSA were killed in these attacks.

Local observers doubt that the FSA is willing to fight the Khalid ibn al-Walid Army, especially that many Syrian opposition activists have revealed before that some FSA commanders are trafficking weapons, fuel and medical supplies to the supposedly besieged terrorist group.

In other words, Israel is merging FSA, and ISIS units to avoid further bad press, now that central ISIS hubs in Syria have been defeated.

This makes FSA against ISIS offensive nr. how many? I feel like the FSA launched more failed offensives against this ISIS enclave then a WWI army on the Western Front.

Dear South Front: I’m not doubting that the last paragraph COULD be true, I’m saying that you should site exactly who said what when and why. Because that may be a rumor spread by internal enemies or it may be apart of some cynical trade deal (everyone’s got to eat).
This is something interesting to consider; a coordinated IDF/FSA and/or SAA assault on the ISIS enclave. Israel coordinated with Egypt to fight a mutual enemy, why not Syria?

‘I’m not doubting that the last paragraph COULD be true, I’m saying that you should site exactly who said what when and why. Because that may be a rumor spread by internal enemies…’

Grow up, or maybe try again. The FSA factions are run by warlords, many with extensive criminal and terrorist Muslim Brotherhood histories, who trade, and ‘tax’, weapons and ammunition with many other factions. They also specialize in seizing food and water resources in their occupied pockets, that are used to both control and price gouge the civilian population, warlords run and profit from local economies. This is very common knowledge, and any attempts to dispute it, or minimize it, reek of a pro-terrorist/militant apologist.
As for your ridiculous ‘coordination’ proposals – firstly, the IDF, a foriegn army in a frozen state of war since 1967 with Syria, are certainly not welcome inside Syria, and secondly, the majority of the FSA are sectarian Sunni fundamentalists, who have frequently joined in coordinated co-offensives with al-Nusra extremists to fight the state – they are the problem not the solution.

Don’t be so hostile to someone you disagree with, that’s one of the root problems of the civil war.
Yes, I am aware of the rampant gang activities. When the war started the UN forces had to withdraw to the Golan because many groups found lucrative profit in kidnapping. You don’t think these guys would spread rumors about anyone they don’t like?

What you say is possible, that radical elements in these groups will not accept any help from Israel. What you that Israel ‘is not welcome’ is an exaggeration; according to reports fro. South Front and others there ars at least 7 militias that receive direct support from Israel (food, munitions, limited air support, short trips to Israeli hospitals, etc).

Israel most certainly does not act in the interests of Syria – have you not worked that out yet – for simple reason that Syria and Israel have been in a frozen state of war for many decades. Hence the FSA militants in Darra openly receive, at the very least, Israeli state subsidized medical treatment, stipend-wage payments and IDF artillery protection over their FSA/ al-Nusra base camps under the Golan Heights. This is done to disrupt the efforts of the Syrian state – and maintain the militant’s capacity to occupy the Darra region on the border. An area Israeli policy makers want to further annex – and they consider the conditions and fallout from war to be the best opportunity to do so. Have you never noticed that ISIS have never attacked any Israeli interests – despite being camped on the border region – and they actually cheer on social media when Israel fires missiles into Syria. Israel is not concerned about ISIS – it wants to keep the militants active in southern Syria for its own benefit.

I recall that we agreed that no true extremist would ever accept help from Israel. According to pro-Israel sources the return of peace under the Assad regime may serve to solve the problem of the limitless small scale border raids. The problem is that neither the IDF nor the SAA wants a war with each other so the fighting is done mainly with minimal forces.
Also I can say without a hint of bias that Israel has no intention of annexing any Syrian territory of significance. In the past Israel has withdrawn from Lebanon and the Sanai twice, each time as apart of a diplomatic quid pro quo and part of the everlasting controversy in Israel of how to minimize battle losses. In this case Israel already has the best defensive positions (the Golan Heights) and any farther will be to close to Damascus for either side to feel secure.
…
https://mobile.nytimes.com/2016/11/27/world/middleeast/israeli-military-kills-4-isis-linked-militants-in-golan-heights.html?rref=collection%2Ftimestopic%2FGolan Heights&action=click&contentCollection=world&region=stream&module=stream_unit&version=latest&contentPlacement=9&pgtype=collection
https://www.haaretz.com/whdcMobileSite/israel-news/in-challenge-to-israel-syria-s-assad-sets-sights-on-golan-border-area-1.5629158

We agreed on nothing – you merely failed to grasp what I was stating – that Syria – the legitimate Syrian state institutions – would never accept or coordinate with any Israeli military actions inside Syria. Furthermore, you are not an Israeli policy maker, working for Likud, and drafting white papers on Israeli territorial ambitions, and possible scenarios to annex the southern-most border districts of Syria.

You say Syria as if that residents of that geographic place are not divided between many warring camps. You say legitimate as if that matters to Afrin, Idlib, Aleppo, or Manbij.
It seems that you are twisting your own argument based on the rhetorical situation. 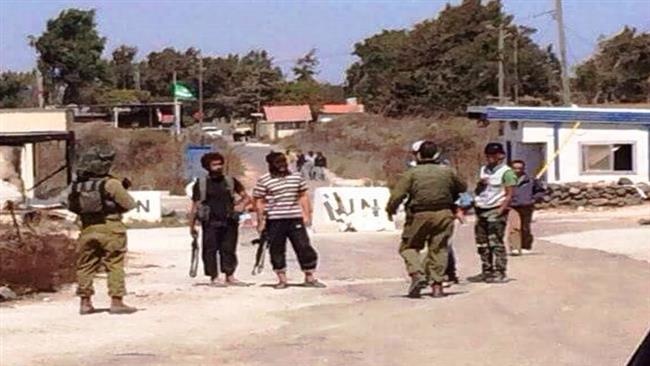 You just proved my point. When we spoke of possible coordination or other deals, you say that no Syrian would accept that and implied that Israel supports ISIS. When I show that neither of those things could be true you shift into saying that Israel is using Rebel proxies. When I used a logical argument to explain Israel’s intentions, you retort by extolling Syria’s legitimate right to protect its citizens and borders. Now that I have made this statement you will reinterpret everything you said to mean that Israel has a superhuman ability to employ Machiavellian schemes.
I’m from Kansas and around here the ‘Jews can do nothing right’ school of thought is considered racist.

Will make it very simple for you:

a.) Syrian state institutions would never accept, allow or coordinate with a hostile IDF inside of Syria
b.) Israel and ISIS have had no serious confrontations despite ISIS occupying pocket on the border in Darra
c.) Israel admits it is sponsoring terrorist FSA/al-Nusra proxies in southern Syria in Darra
d.) In posted image those are al-Nusra (aka al-Qieda) terrorists, negotiating with and operating under full IDF protection on the Golan border where they are based.
e.) But when presented with these these facts you rather desperately switched to pulling out the race card…

The majority of Syrian nationals live under the jurisdiction of the Syrian state institutions – all major populated and functioning cities are state controlled – the militants are an extremist minority. Incidentally, the SAA liberated eastern Aleppo from terrorist al-Nusra factions in late 2016.

Why it is best not to interfere with your enemies attacking each other, the time is quickening now with the precedence Syria and it’s alliances has now set to strike Israel or any other proxy as far as into the Golan heights of any occupying forces regardless. It will be no different when the time comes to the north of the Euphrates River.