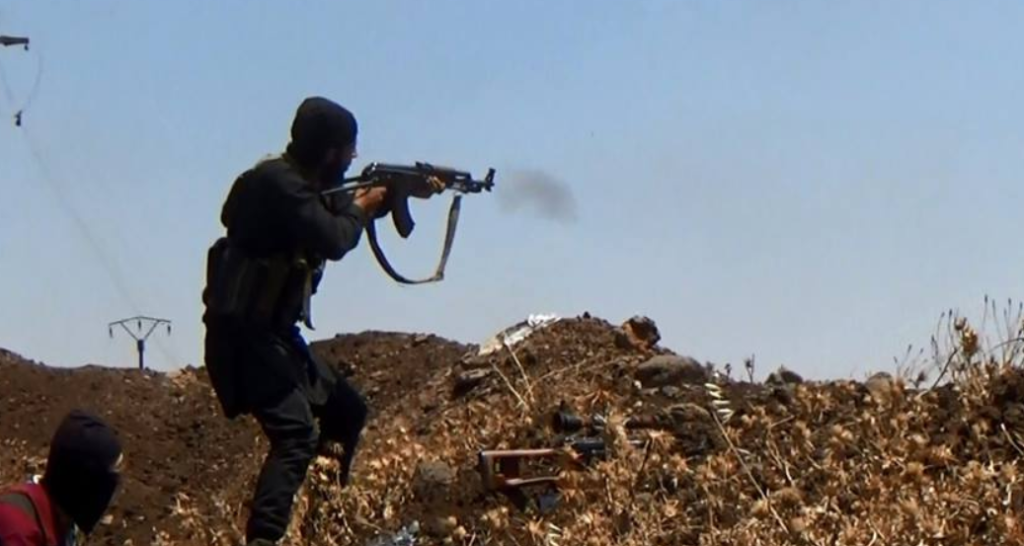 According to the report, Israeli Unmade Combat Aerial Vehicles (UCAV)s supported the previous attack of the FSA on Khalid ibn al-Walid Army in the western Daraa countryside on November 28. The Israeli UCAV conducted at least five airstrikes in support of the FSA during to the previous attack, according to Enab Baladi. However, the Khalid ibn al-Walid Army repelled it.

The Israeli Army promised the FSA groups that it will provide them an air support and vital intelligence for the upcoming attack, according to the report. However, Enab Baladi said that Israel will not use warplanes directly, but only UCAVs and medium range ground-to-ground missiles.

This is not the first report about the cooperation between Israel and the FSA in southern Syria. On September 8, the Syrian opposition news outlet SMART published a video of the Free Syrian Army (FSA) group shelling position of the Khalid ibn al-Walid Army with 107mm rockets supplied by Israel.

Israel was also accused of supporting an attack of Hay’at Tahrir al-Sham (HTS) on the Druze town of Hadar in Quneitra on November 3.

Israeli officials have denied that Israel is involved in the Syrian war on many occasions. However, the FSA attack on the Khalid ibn al-Walid Army with Israeli support will be hard to deny.

Yeah sounds like a joke too. Israel supported Jaysh Khalid ibn al-Walid for years in that area, there’s footage of even israeli canned food and toilet paper there.

Ah yes. Toilet paper. Don’t they have it perforated to save on cost?

You expected Israel to be loyal and not wash their hands of ISIS the moment they were no longer useful? Dead men tell no tales.

While I agree with you, ISIS are still useful somewhere else. I know America has bused some to Yemen and some to Africa. Contractors do not come any cheaper.

Not to mention the chopper evacs… Sorry if I came off as snarky, I’m with you 100%, today is apparently one of my cunty-troll days.

My guess is that because this particular pocket of ISIS doesn’t really engage the SAA, Israel figure it’s better to eliminate them in order to create a stronger FSA that will in turn engage the SAA.

Hmmmm. I think every war is a war by deception. America has certainly not had one that wasn’t.

Good to see you’re among the few who are awake

This has always been the plan. The ISIS and FSA forces close to the occupied Golan have been used by ISrael to guard territory that it covets. Israel has helped ISIS/FSA keep the SAA at bay at this time. The plan was for Israel to be ‘forced to take over the area to protect itself’ at a suitable time, ie just an excuse for a long planned land grab. The territory it wants is rich in resources, fertile land, water, oil/gas.

You do have a very good point.

Shocking, isn’t it?? But in the long run, that’s actually what Isis was for. Isis was to smash up Syria initially, and then serve as an Israeli punching bag once Assad was gone. Then the Israelis were to be portrayed as rescuers of the innocent Syrian people once the US anounced their need of rescue.

Still anybody will deny that Israel use terrorist groups against Syrian nation.

Less about ISIS and more about Israel propping up its FSA proxies position in area.

Israel is ISIS. Do you mean they will shoot themselves??? :)

Israel will make everything to stop Iran and Hezbolah built the Shiite arc,By this movement will try to cut the arc before it reach to Lebanon.

fsa is a usefull tool. Turkey uses them now Israel. Turkey uses them as an excuse to hit sdf and now israel to hit Iran-Syria.. How?its obvious. Fsa will be the last group that will remain after the war is over. they are labeled ‘moderate opossition’ by everyone. HTS-iSIS are useless brands. They are terrorists ! But FSA will negotiate after the war with Syria. First steps were made with Russia and Turkey agreeing with them about ‘no conflict zones’. THey are the ‘reasonable’ ones. So what will happen to them after the war is over?maybe they will become members of the parliament, form a ‘union’ government, remain a military force to establish low and order in semi autonomous areas?that makes them a high value asset in the years to come…..and a worm in the heart of Syria.

ISIS or FSA, there is no difference at all. They are all terrorists and useful idiots sponsored by Tel Aviv, Riyadh and Washington for ‘regime change’ operation in Syria.

THE FSA AND ITS ISRAELI PARTNER PLAN A JOINT ATTACK AGAINST BROTHER POLITICO DAESH. USA AND SAUDI ARABIA WILL BE DISTURBED WHY THEY ATTACK THEIR CHILDREN.

An obvious and absurd pre-text to get more boots on the ground closer to Hezbollah in the area in an attempt to surround them.

I’m sure this is an early Aprils fools joke?

Yup, I guess this is the game plan, to give the Terror state ISISrael an cover for more occupation and taking further parts of Syrian land, and this will of course be legitmaized by this pack of rats calling them self, Free Syrian Amry, ( I dont bother to follow the constant flow of weird names, since they to me nothing else than just that, an camouflage, nothing else, just follow the boots)I wounder if this approach is been approved by the Russians, since so far this approach is the only “logical” I can see, Lebanon will of course be surrounded by proxies, further up the border line, and then have to defend larger parts of their own territory, where the Mercs can inflict war on Lebanon as well.

Yeah, watch the west fall into line behind the scums of this earth, the ISISrael.

And I also think, since the war is basically done, apart from the Kurds, witch by them self isnt a problem, its the UssA/Brits/France that is the problem, and now they have an wide open highway into Syria. Will this happen, yes, it will, and nobody is going to do anything about it, this is to prolong the war in the Levante, this is what they want, along with the bonkers Saudi-Barbarians, and their pack of whores, like UAE, etc, etc.

Never, ever, trust an wankee, never ever do that again, only an fool and an greedy ignorant rat thinks the UssA is an friend, over 200 years of history, or more like an criminal record, should be glaringly obvious, they do what they want, and that is what is coming. Yeah, whats it going to be boy, as long you do nothing but trust your head deeper into the sand, your ass is still in the air, ankle grabbers. Get your head out of your ass, the only thing left to do, and throw out the Wankees.

I agree, its hard to stay current with the name changes, so I am going to support Assad, and let him and his buddies work it out.

ISIS was always an Israeli front organization. In Libya, a MOSSAD agent was discovered posing as an imam.

FSA and IDF going to attack ISIS ? Getting in the fight this late in the game is to pretend they never helped ISIS before??

Jewish Israeli depravities, working with the UK, will seek any excuse to enter Syria. Fools will dribble on about the detail of the excuse.

The Israeli jews don’t care which terror gang they ally with and which group of ‘sub-Humans; they help murder. The principle that the legal government of Assad cannot keep evil mass-murdering jewish extremists out of Syria is the whole game.

Talmudic jews always look for ‘cracks’ in greater Human society. The recent horrific warcrime, where Israel launched a massive attack on Iranians in Syria, was the usual jewish test of the waters. This warcrime went unanswered and uncriticised. Iran doesn’t want to admit it for domestic reasons. But Putin, a rock solid ally of the depravities in Israel, didn’t say a word either.

While the wahhabi project in Syria is dead, a constant degrading of Human life there by never ending acts of extremist jewish terror (see Gaza for the method) is the plan. There will always be some terror group for the jews that control the mainstream media to describe as ‘rebels’ in Syria. And Israel will work with these ‘rebels’, with the explicit approval of the USA and EU (and implicit approval of Russia) to sabotage syrian society.

Israël helped defend Haidar, did not attack it. It is well known Israel supports one or two small FSA units with some supplies and a little money and maybe some intelligence. Israël preferring FSA over IS as a neighbour seems a no brainer to me.

Didn’t Israel say that it preferred ISIS to Assad as a neighbor?

Next place for new ISIS caliphate will be In Libya, ISIS goes only in torn apart countries to make their caliphate.

Looks like the Ziostanis have realized Daesh is a losing bet, so they are throwing them under the bus.

Maybe its a lame joke?

Makes a change from helping ISIS.

problem in Syria will never stop. if war prolonged to more years, ordinary people in syria both the pro and anti assad will suffer greatly to the extent that they will crawl down their belly. this is the time when the sunni will fully blown! shiate and alawite’s end will come!