In stark contrast to the “Yes Platform” rally in Chisinau, Red Bloc’s march of several hundred people was met with violent repression. 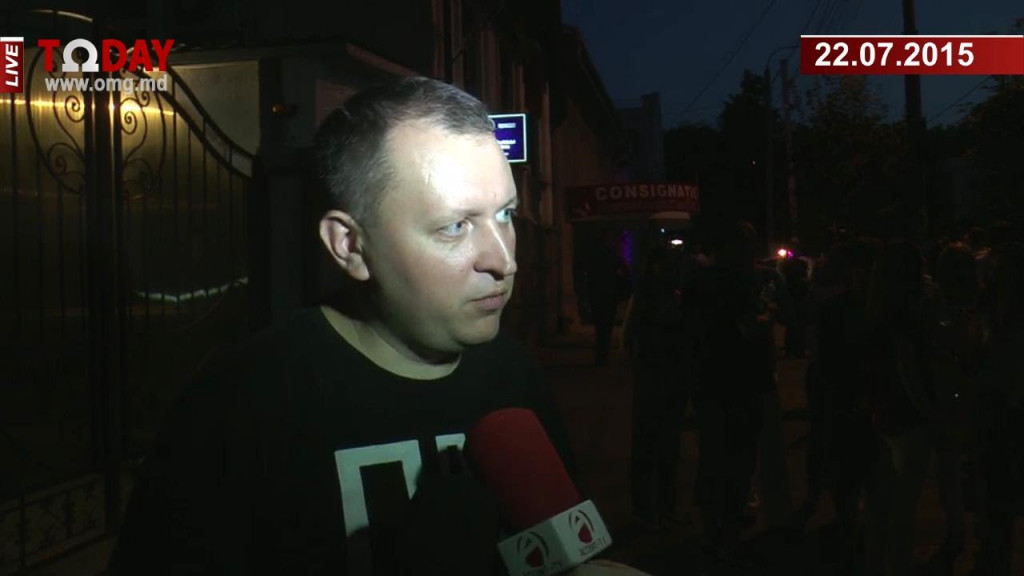 We call on the government of the Republic of Moldova to immediately release the seven left-wing political activists arrested at the Prosecutor General’s Office in Chisinau on Sunday, Sept. 6, 2015. They were detained during a peaceful protest of several hundred people, calling for the arrest of Moldovan oligarch and political kingmaker Vladimir Plahotniuc and the resignation of Prosecutor General Corneliu Gurin.

Originally the activists were detained for 72 hours, during which time they reported being beaten. On Sept. 8, a Chisinau court extended their detention for 30 days.

The seven arrested protesters include Grigory Petrenko, former parliamentary deputy and member of the Parliamentary Assembly of the Council of Europe (PACE), and leader of the Red Bloc party (formerly called Our Home is Moldova); Pavel Grigorchuk and Mikhail Amerberg, who spent several months in jail earlier this year on false charges of conspiring to disrupt last November’s parliamentary elections; and Alexander Roshko, Oleg Buzni, Voya Jurat and Andrew Druz.

This summer, the Red Bloc initiated nationwide protests against utility and fuel price hikes, forcing the Moldovan government to step back from some of its planned austerity measures. In July Petrenko personally led Liberty Township, a tent city protest outside the home of oligarch Plahotniuc, which was broken up by police and private security agencies with the General Prosecutor Gurin’s blessing.

Petrenko’s party has stood firm against “Euro-integration,” which has resulted in selling off Moldova’s industry and resources and making its people a cheap labor pool for the European Union, devastating the livelihoods of workers and farmers. Red Bloc also opposes the government’s partnership with the far-right junta of neoliberals, oligarchs and fascists in neighboring Ukraine, Kiev’s threats against the independent republic of Transnistria, and the war against the Donbass people’s republics. It opposes plans to merge Moldova with NATO member Romania.

Most threatening to the pro-Western rulers of Moldova, the Red Bloc seeks to unite people of all nationalities and language groups around an anti-oligarchic program of rolling back austerity and establishing peaceful relations and trade with Russia and the countries of the Customs Union. As a result, Petrenko and his party became the targets of slanderous attacks in the oligarch-controlled media, with some commentators openly calling for his arrest.

On Sunday, Sept. 6, two major protests were held in the Moldovan capital. The first, an anti-corruption rally sponsored by the “Yes Platform,” was dominated by pro-Western parties excluded from the government. In response to this “Grand National Assembly,” Prime Minister Valeriu Strelet, representing the ruling Alliance for European Integration, pledged to negotiate with these protesters.

In stark contrast, the second action, a Red Bloc-initiated march of several hundred people, met with violent repression. Riot police blocked marchers from entering the Prosecutor General’s Office, then attacked protesters when they attempted to erect a tent city outside the public building. Many people were injured, including a pensioner who was rushed to the hospital.

Following the arrest of Grigory Petrenko and his comrades, masked security forces raided the offices of the Red Bloc party, Petrenko’s home, the home of his elderly in-laws, and the home of fellow prisoner Mikhail Amerberg. All of these searches were conducted illegally, without a court-issued search warrant or lawyers present. When Petrenko and other prisoners were brought before the judge on Sept. 8, they were surrounded by dozens of riot police wearing flak jackets and slinging automatic weapons.

Today Moldova sits at a critical juncture. Austerity bites deep and the people’s future looks bleak. Moldova could tip toward the Ukrainian scenario of ultra-nationalism, fascism and war -the options that seems to be favored by Plahotniuc, the current regime and some of its erstwhile opponents. Or, by mobilizing popular forces against the spread of austerity and war, Moldova could blaze a trail of hope for people throughout eastern Europe and the world.

If President Timofti, Prime Minister Strelet and pro-European forces inside and outside the regime are as dedicated to democracy as they claim, then Grigory Petrenko and his fellow protesters must be freed and their voices must be heard.

Co-sign To this statement, email solidarityukraineantifa@gmail.com