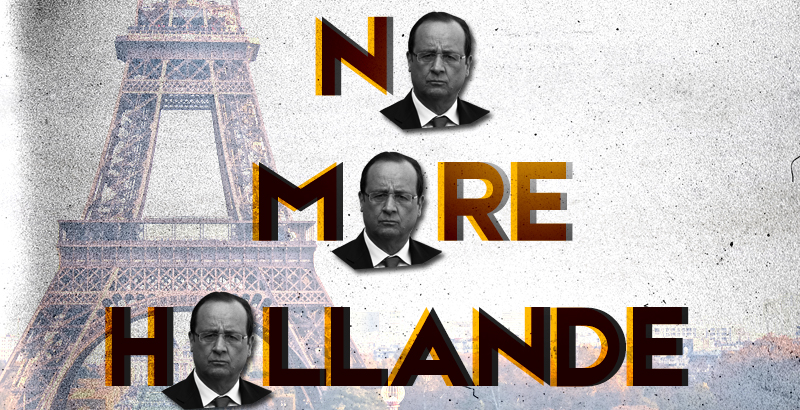 “I took the decision to not run for a second term and wanted to inform you personally” stated the President of France, Francois Hollande in a televised broadcast nationally last night at 20:00 pm. If rumors of the news circulated around in recent weeks, the announcement was surprising: Hollande announced it only hours before the broadcast. This comes a week after the election of Francois Fillon as candidate for the Republican right wing, in the May elections and two months before the primaries for a candidate of the left, which look to be extremely controversial.

Last month was marked by a sharp confrontation between the prime minister Manu Waltz, who made no secret of his presidential ambitions, and President Hollande, who did not exclude the possibility to run for a second term. Within the French constitutional structure, the president is the head of the executive, and the prime minister is a simple executor of his will. In this sense, the confrontation of the president and prime minister in the battle for a presidential candidacy sounded like nonsense, given the fact that both of them have the same general policy and share a common political opinion. The paradox in today’s situation concluded in the fact that Waltz is the stronger figure of the two, and Hollande is beating all records in unpopularity. In the last ten days, the establishment of the Socialist Party instinctively gathered around Valls, who managed to convince the incumbent president to withdraw from the race in order to give a chance of consolidation in its camp.

Francois Hollande’s five years at the Elysee Palace will go down in history as one of the unhappiest times for France. Paris let Berlin lead the EU, which until recently was based on the agreed will of the Franco-German tandem. In economic terms, the unemployment rate in France grew and began to recover only in the middle of this year: too late to be capitalized on as a success of the incumbent President. France suffered a series of terrorist attacks, but did not reconsider its inadequate position in the Syrian crisis, in which Paris continues to support, albeit tacitly, the mythical “moderate Syrian opposition.” France Hollande’s mandate let France involve itself in the exacerbation of the Ukrainian crisis, first becoming a guarantor of the agreement between the leaders of the protest and Yanukovych, and then leaving Maidan stormtroopers carry out the coup in Kiev without responding to violations of the agreement. In domestic politics Hollande fed the tabloids with paparazzi photos of his infidelity. The legalization of gay marriage divided France into two and gave rise to conservative attitudes, which today find their spokesman in the face of Fillon. The labor law reform became a cause for many months of battle between unions and power, a battle which at times expressed itself in street fighting. Paradoxical but true: the reforms of the so called socialist president caused the most drastic aggravation of the social climate in France since 1968.

Among Hollande’s successes are the efficient intervention of the French army in Mali, where France drove the Islamists away and forced some semblance of peace. In 2015, a global agreement to combat climate change concluded in Paris, with the leading role of French diplomacy. In the years of hardship, Hollande behaved with dignity as president of the country, which has been repeatedly attacked by terrorists, but he never managed to convince the French people and the world that he is an authentic leader, due to lack of charisma, a lack of reform program and clear goals. But mostly due to a lack of political will. “Hollande did not give up a second term. In fact, he never became president” writes Figaro today. And that’s the truth. His decision to withdraw from the race is the only move that can redeem with humility that, which he squandered through a lack of will.

Francistan thinks the replacement will change anything? I think not.