The French aircraft carrier Charles de Gaulle will arrive to the Persian Gulf on Wednesday the 18th. 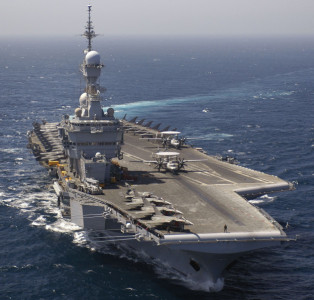 For the second time this year, France will deploy its Charles de Gaulle to enhance the offensive against the Islamic State of Syria and the Levant (ISIL) as part of the operation “Chammal”. France first deployed the aircraft carrier to the Persian Gulf from February 23rd to April 18th.

The deployment of the vessel was approved on a defense council on November 5th in Paris. The measure was widely expected by the members of the coalition fighting ISIS, since it will strengthen the capacity of French aircrafts land-based in the United Arab Emirates (UAE) and Jordan.

The carrier will have: 20 Rafale and Super Etendard Modernise (SEM) aircrafts on board to boost the power of the already land based Mirage 2000Ds (3), Mirage 2000Ns (3) and Rafales (6).

The Charles de Gaulle is at sea at the moment conducting pilot qualification trials, but will return to the Port of Toulon in France before the date of its departure to the Middle East.

Since the beginning of operation “Chammal”, France has made about 1300 sorties against the terrorist group in Iraq and started its offensive to the extremists in Syria since September 27th.