After 9 gigabytes of Macron-linked documents and emails were released on an anonymous pastebin website on Friday afternoon in what Macron’s campaign said was a “massive and coordinated” hacking attack, France – fearing a similar response to what happened with Hillary Clinton after 35,000 John Podesta emails were released one month before the US presidential election – cracked down on the distribution of the files, warning on Saturday it would be a “criminal offense” to republish the data, and warning the French media not to publish content from any of the hacked emails “to prevent the outcome of the vote being influenced.” 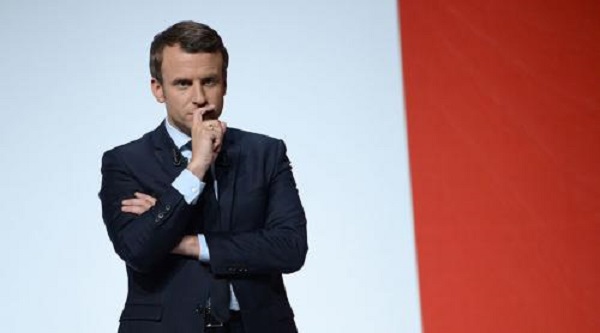 Quoted by Reuters, the French election commission said in a statement that “on the eve of the most important election for our institutions, the commission calls on everyone present on internet sites and social networks, primarily the media, but also all citizens, to show responsibility and not to pass on this content, so as not to distort the sincerity of the ballot.” Following a rushed meeting on Saturday morning, the commission which supervises the electoral process, said that the data been “fraudulently obtained and could be mixed with false information.” It is unclear, however, how it hopes to enforce any punitive claims, especially when much of the initial document distribution appears to have taken place offshore.

Domestically, in a similar reaction to the US media’s response to the Podesta emails, French TV news channels chose not to mention the hack, although the left-leading Liberation prominently featured the news on its website. Liberation author Cedric Mathiot wrote that the leak, and its timing, “wants to create chaos” adding that the information was distributed in an “unethical method.”

On Friday night, as news of what has been hashtagged as @MacronLeaks on twitter spread, Florian Philippot, deputy leader of the National Front, tweeted “Will Macronleaks teach us something that investigative journalism has deliberately kept silent?” In a tweeted response, Macron spokesman Sylvain Fort called Philippot’s tweet “vile”.

In another parallel to the Clinton leaks, Macron’s En Marche! party said the leaked documents dealt with “the normal operations of a campaign and included some information on campaign accounts.” It said the hackers had mixed false documents with authentic ones to “sow doubt and disinformation.”

But in the biggest parallel to the Clinton hacking, few have touched upon the actual contents of the documents, which some say confirm prior allegations of illicit financial dealings and offshore accounts, and instead merely sought to attack the messenger. Indeed, as journalist Kim Zetter noted overnight, “Telling journos to not report on hacked emails misses point that nearly all important leaks occur because someone broke law or a contract” and then followed up with the following rhetorical question, flipping the situation by 180 degrees: “If GRU, intending to assault dem., hacks Trump & publishes emails showing his direct connection to Russia, should journos report on those.”

If GRU, intending to assault dem., hacks Trump & publishes emails showing his direct connection to Russia, should journos report on those? https://t.co/cJJcjXkgBa

As reported on Friday evening, WikiLeaks tweeted that the leak contained “many tens of thousands” of emails, photos and attachments dated up to April 24, but it noted that it had come “too late” to affect the election results. In a follow up tweet, the controversial whistleblowing organization posted a tweet sharing the location of all #MacronLeaks archives which are “now available as uncensorable magnet links http://archive.is/aULcm”

Since there has been no suggestion WikiLeaks is responsible for this hack, speculation about the source of the hack has grown, with Russia once again emerging as the “usual suspect.”

Cited by Reuters, Vitali Kremez, director of research with New York-based cyber intelligence firm Flashpoint, said his review indicates that APT 28, a group tied to the GRU, the Russian military intelligence directorate, was behind the leak. He cited similarities with U.S. election hacks that have been previously attributed to that group. Kremez also said that APT28 last month registered decoy internet addresses to mimic the name of En Marche, which it likely used send tainted emails to hack into the campaign’s computers. Those domains include onedrive-en-marche.fr and mail-en-marche.fr.

“If indeed driven by Moscow, this leak appears to be a significant escalation over the previous Russian operations aimed at the U.S. presidential election, expanding the approach and scope of effort from simple espionage efforts towards more direct attempts to sway the outcome,” Kremez said.

We expect the Kremlin to deny all allegations shortly.

To cover all bases, others have also accused the “Alt Right” of being responsible for the leak:

Ben Nimmo, a UK-based security researcher with the Digital Forensic Research Lab of the Atlantic Council think tank, said initial analysis indicated that a group of U.S. far-right online activists were behind early efforts to spread the documents via social media. They were later picked up and promoted by core social media supporters of Le Pen in France, Nimmo said.

The leaks emerged on 4chan, a discussion forum popular with far right activists in the United States. An anonymous poster provided links to the documents on Pastebin, saying, “This was passed on to me today so now I am giving it to you, the people.”

The hashtag #MacronLeaks was then spread by Jack Posobiec, a pro-Trump activist whose Twitter profile identifies him as Washington D.C. bureau chief of the far-right activist site Rebel TV, according to Nimmo and other analysts tracking the election. Contacted by Reuters, Posobiec said he had simply reposted what he saw on 4chan.

“You have a hashtag drive that started with the alt-right in the United States that has been picked up by some of Le Pen’s most dedicated and aggressive followers online,” Nimmo told Reuters.

Sunday’s election, whose result is expected in just over 24 hours, is seen as “the most important in France for decades, with two diametrically opposed views of Europe and the country’s place in the world at stake.” Tune in then to find out if Wikileaks is correct, and the #MacronLeaks is nothing more than a tempest in a teapot, unable to chisel away at Macron’s lead over Le Pen which the latest polls calculate to be as much as 25 points.

What do we know?

That Macron intends to use the following years to push for more … multiculturalism until there will be no chance that a nationalist government will ever be elected in France fro now on because of the changing voter demographics. Only EU-friendly governments.

Oh we know, and you know that we now know. So just sing along with all the world for we all know, the Goyim know https://www.youtube.com/watch?v=sShxBV9ccEE

Germany is finally controlling Europe,economically tho.Seems like ww1,ww2 didn’t matter when It came to stopping that.Lets hope Le Pen wins and takes France out of the EU,Frexit would be so beneficial to the French people.

“(tyrants) rise up against writings calculated to… **disclose the mysteries of administration** and… under colour of repressing licentiousness *, **prosecute authors of spirit**” – Jean-Paul Marat, 1774 (http://jpmarat.de/english/jpmcha3e.html#ToC3)

Wanna know the ugly truth, huh, can you handle it.

I base that on the simply truth, that even in Norway we have elections and one thing is sure, the only thing I is 100% certain, is that nothing will change, no matter what said, no matter much true, logical and moral they claim they are before an election, we have had our “trumpsteins” in Norway, but they forgot everything the moment they got some political power and they all ended up with doing absolutely nothing by that I mean whatever scam they call economic politics and domestic issues, nothing will change, because we dont have anything to say, the cencure and control is 100%, no opposition is allowed what so ever, and everything is getting increasingly worse, the problems we have with rapefugees is simply not debated, and our police dont even bother, but chase their own for petty crimes when our illegal or whatever does something, its not even reported, and then they have the nerves to present “charts” that tells us how happy we are, how little problems we have, our crime rates is going down, and rape is only written about if the perpetrator is white or European, never else, and so on, the same rotten MSM that runs the western hemisphere media circus.

The only change was that the poor got poorer and the shameless scums got richer, and everything else is blamed upon the people.

Why. Because everything, every f…. European Politicians is an rotten corrupt sac of shit, no exceptions what so ever, and they all bow for the Imperial banana republic uISISa, with no exceptions what so ever. When it comes to eCONomic politics, nothing will change. Wars, the only thing I know will change, and that for the worse, with an Village idiot running the pack of pirates on the Potomac, in the district of criminals in the imperial banana republic Trumpistan.

The refugees, well, nothing will change it, they may drool something about stopping but their masters wants cheep and workers without rights, an new way of taking peoples money thru an policy of austerity created by the use of well fare to crash the social structure, workers pay and rights, and finally the well fare systems, like they do in Norway/Sweden, in fact our nations are dying, done by the hands of the same cabal that runs France. And our MSM will continue with their hate propaganda against their own people, again done by the people that runs the “elections”, witch this days have become an macabre joke in real time.

No, I am not optimistic, on the behalf of the French, nor the rest of the European lands. I find Lala Pen to be way to coward, and avoids the real issues, by placing to much power on the MSM and their minions whom have created this problem in the first place, like the refugee issue. Charm is like pimping up an pig with lip stick, dont impress me at all, I want substance, and so far its just an stupid haggle, about even stupider issues and word plays, and not the real issues at all.

Hurmf, you are f….. francs, no doubts about that, either way.

I hope the french people have an IQ above 100

wouldn’t hold your breath on that level of an IQ. French have turned into a flock of sheep.

I hope in a Macron win 51/49, 30% of non-voters, maybe also more.. Next election challenge Le Pen/Melanchon :D Le Pen cannot form a governmente also if win…best to made suicide the europeist with an another europeist government. I would a civil war.

The only reason that they ban the publishing of those emails is because it is NOT false news.

What should be introduced is a Law that makes every candidate publish their financial, religious, asetts and memberships to foreign institutions so that their credentials can be accurately assessed prior to voting, a full disclosure. That way the voters can weed out the undesirables before they get appointed.

It seems that Macron has leeked those files “himself”, oh look i’m being hacked by the evil russians, bla bla bla, vote for me and not for le Pen cause she’s a russian puppet XD

there was Russian text everywhere, end there”s nothing really criminating in the mails . No hacker is that stupid It seems that Macron puppet handlers have ordered the hack them self. Le pen in now