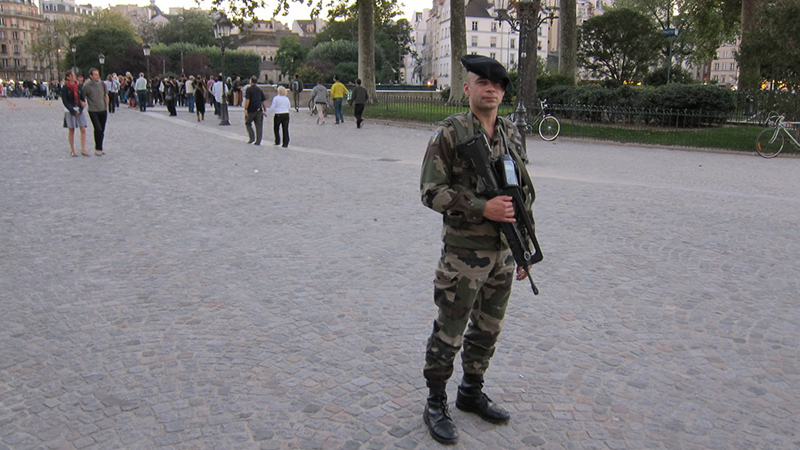 Since the attacks of November 13, France returned to the center of the world. Their lovely tricolor flag flies everywhere, from Beijing to Washington, from Buenos Aires to Moscow. The Marseillaise, the national anthem that the French were forgetting, made a dazzling return. And French diplomacy, so discreet in general, now is frenetic activity.

“France is at war!” proclaimed the President Francois Hollande full breasted and his Prime Minister Manuel Valls repeated: “We are at war!” But that is not true. It is the Islamic State (ISIS) that is at war. How can a country respond against an invisible force that makes the war, if the country itself is not legally in a  ‘State of War’? All political and diplomatic acrobatics of France since then are explained by the asymmetry of this war, that one side locks while the other is not officially at ‘State of War’.

Abdelhamid Abaaoud, the mastermind of the massacre in Paris, was killed during a violent police raid on November 18, in the suburb of Saint-Denis, where he prepared new terrorist attacks. The complex question is this: how this man, this Belgian described by all of the European police forces as one of the most dangerous jihadists in the world, could enter Paris and France freely? The man was not even hiding. He was always laughing, releasing videos on the Internet, where he appeared in the middle of beheaded or tortured people. To travel, Abaaoud was like you or like me, passing through the controls, the checkpoints as he boasted in his videos. Residing in Belgium, he made two trips back and forth between France and Syria and most recently he returned to France to kill. It is the French people who suffer from that war.

Surely, France is right to claim that the terrorists do not frighten them. Ok fine, but it is a lie. Two days after the attacks, there was a crowd on Place-de-la-Republique in Paris, a spontaneous meeting by the Parisians to demonstrate that they were not afraid. But suddenly, shots were heard and a rumor ran through the crowd that ISIS was attacking again. In a second, the square was deserted.

The journalist Gilles Lapouge said at the time that “All these people without fear fled like rabbits at a supersonic speed. But isn’t that a natural reaction? The truth is essential in war as in peace. The truth is that ISIS causes fear in man, in civilization, in humanity. Why lie? The real problem is whether we will be able to overcome that fear.”

And as a result of that, this week, the French National Assembly approved the first step toward a ‘State of Emergency Law’. President Francois Hollande said the attacks were an act of war and declared a ‘State of Emergency’, which hasn’t been declared since the Second World War. This measure cuts fundamental rights and authorizes search and seizure in homes and the arrest of people without a warrant.

Those who are debating about whether or not to publish Hitler’s books should turn their attention to a phenomenon that has radically changed the nature of what we until recently called democratic societies. From a legal point of view, the Nazi-fascism had two fundamental pillars. The first was the transformation of the ‘State of Emergency’ into  the normal way to govern. The second was the possibility of legally stripping the individual of all his citizenship rights.

For example, the German Constitution of the Weimar Republic (1919) had the famous article 48, which gave the president of the Reich the power to declaree a ‘State of Emergency’ in situations where ‘security and order’ were seriously endangered. Thus, when Hitler came to power, it was enough to start a fire at the Reichstag in order to make sure that the country was in a state of severe insecurity so he could rule Germany by imposing a state of emergency that lasted 12 years. This is something to think about.

After last year’s terrorist attacks and the situation of ‘serious insecurity’, the French government presented a series of measures through which the state seeked to take advantage of the situation in order to create a legal indefinite suspension of law. The French Prime Minister has clearly stated that the ‘State of Emergency’ was to last until the Islamic State ceased to be a threat.

But, what happens if it takes 12 years to ‘destroy’ the Islamic State? And what if after the fall of ISIS another group appears, maybe in the same way that Al Qaeda came to be? Are we not currently witnessing a kind of self-destruction by Western democracies?

Let’s look at another law that was passed. It allows the State to withdraw French nationality from anyone who “committed a crime or a serious attack on the nation’s life.” At first, the wording of the law made it clear that the target were primarily bi-national citizens, i.e mostly those of Arab decent.

Now, the target becomes clear. All discussion of the law was focused on the distinction between citizens who may lose their nationality and others who may not. For no other reason opponents point out that the Nazi regime created similar laws to remember that the Jews were not full citizens and that they could simply lose their citizenship.

A law of this nature (which is also being discussed in other countries, such as Belgium and England) is simply criminal and throws a whitewash in the rest of democracy that liberal societies were forced to endure. Taking advantage of the national commotion that followed the brutal attack, the French government proposed a law that will not have any effect on the fight against the causes of security threats or does anyone seriously believe that a person willing to make a terrorist attack would think twice because they could lose their citizenship?

In fact, says Vladimir Safatle, PHD in philosophy at USP, “the law only serves to show the children of Arab immigration that they were never seen as actual citizens, since they can simply stop being French. That is, it serves to deepen the sense of exclusion, prejudice and asymmetry that is the true element that feeds extremism. “

It is a legitimate interest of countries to have tools to combat terrorism, a threat that scares both the governments as well as the people. On the other hand, very ambiguous anti-terrorism laws have been used to criminalize social movements and civil liberties around the world. The own Inter-American Court of Human Rights condemned Chile in 2014 for using his anti-terror law against Mapuche activists of the indigenous people.

George Orwell in his book “1984”, portrays a totalitarian society that has reached the point of equating terms usually associated with the semantic field of positivity like peace, freedom and strength for terms associated with negativity like war, slavery and ignorance. We should remember that in Germany, Hitler used the grey areas of democracy to design his new Reich. From a purely legal point of view, the Nazi State was totally legal and this is a terrifying fact. The direction that France is headed in can lead to a state where parliamentary democracy would be engulfed in a shadow that it itself has created. Like “1984”.