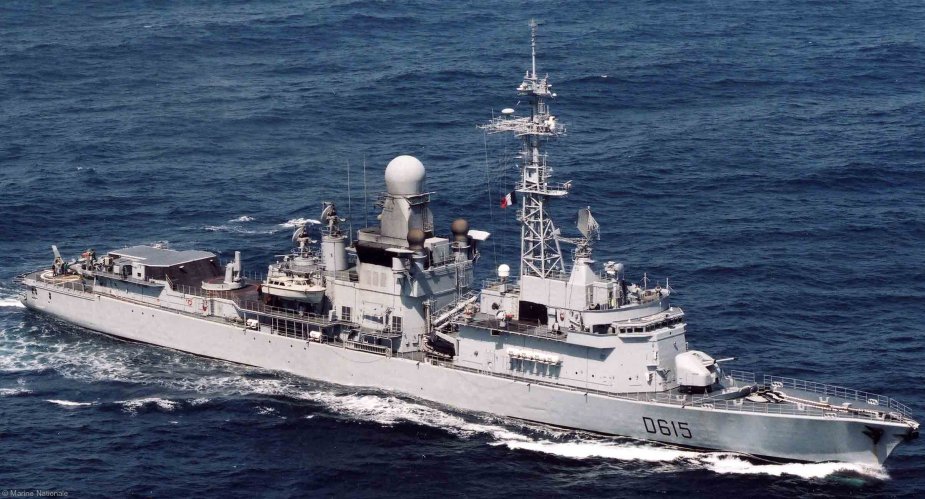 On July 1st, France informed NATO that it is suspending its participation in a naval operation in the Mediterranean after the results of a probe into an incident between French and Turkish warships.

According to the French Armed Forces Ministry, the country’s permanent representative to NATO, Muriel Domenach, sent a letter to Secretary General Jens Stoltenberg to inform him of the decision.

France said that on June 10th Turkish warships flashed their radar lights three times at the Courbet and that Turkish sailors had also put on bullet-proof vests and stood behind their light weapons during the incident.

Turkey has dismissed the French claims as “groundless”.

Stoltenberg said NATO officials were looking into the incident, adding: “Those two NATO allies have totally different views on what actually happened.”

According to him, however, it is obvious “that we need to support the UN efforts to find a politically negotiated solution to the conflict in Libya,” he added.

In relation to the investigation into the incident, an official from the French Armed Forces Ministry said a letter had been sent to NATO on Tuesday outlining four demands:

“While waiting to move ahead on these demands, we have decided to temporarily withdraw our assets from Operation Sea Guardian,” the official said.” It doesn’t make sense to keep our assets … with allies who do not respect the embargo.”

France, following the incident with Turkey has been vocal in its opposition of Ankara’s operation in Libya, which supports the Government of National Accord (GNA) against Field Marshal Khalifa Haftar’s Libyan National Army (LNA).

“It does not seem to us healthy to maintain our assets in an operation supposed, among its various tasks, to control an embargo alongside allies who do not respect it,” an anonymous French official told media on July 1st.

Paris demands in particular “that allies solemnly reaffirm their attachment and their commitment to the respect of the embargo” on weapons to Libya, the official added.

“At our request there will be a meeting of EU foreign ministers on July 13 solely on the Turkish question,” Jean-Yves Le Drian told a parliamentary hearing.

“Sanctions have already been taken on Turkey by the EU over Turkey’s drilling in the Cyprus economic zone. Other sanctions may be envisaged,” he added.

So the crybaby Macron’s claim was wrong, and he got upset and pulled his Navy back. Not an alliance but a kindergarten.

What Turkey did was criminal. Threatening and harrassing an Nato Ally who was trying to make peace in war torn country.

Turkey harasses Greece, a NATO ally, on weekly basis – via Turkish warplanes deliberately, and provocatively, overflying into Greece’s island and mainland airspace, the rest of western European NATO members never raise a public word about it.

Because Turkey is right pain in the arse.

I know but Greece’s rulers need to wake up and grow balls. Noone is going to help Greece ,they never did and Infact its own Allies have screwed it over many times. Greece needs some men of action and brains to talk the talk with the weak and sneaky Eu politicians around whilst AT THE SAME time ,building up its own defences and strategies and keeping them secret from Nato and its Allies. Even nuclear as did Pakistan ,Israel and India. One day on the radio. “Guess what ,Nato and Turks.! We are nuclear. Thanks for coming. ”

That will still mean conventional warfare but like I said ,you need men of action and brains in the army as well but the “Right Stuff” not the crap that Yanks tell you to.

Taking money from the EU was a mistake. A hundred times a mistake but that wasn’t the people’s fault ,it was your govs and bankers and both your political parties. How else can it all be explained , especially seeing Tsipras the “so-called” pseudo hard Left-er who did more for the Americants than the useless Colonels did in 1967 to 1974. If I saw Tsipras in real life I would not even bash him or Swear at him. I’d slap him with an Officer’ Glove without a word like the bitch -arse he is. Hang Samaras as well ; that eunuch runt who allowed all those Moslem Shiptars in twenty five years ago pretending they would be Good Greeks one day . Lol As if! It took hundreds of years to kick these jihadi hearts out and he brought them back in ! I read newspapers and I don’t forget.

Get over it! Noone is your friend ,Greece ,noone, so save your money and you should have defaulted and starved for a few years. All those countries that defaulted and told their international bankers and their allies to fck off are back on track again but you are not because you have given away everything like Graeculi!

Only thing I can’t stand more than a Greculus is a fat , pompous Central/Western European or bloodthirsty ,dumb jihadi Moslem /Turk! Sick to my stomach! Disgusting!

Wake up! You will not get what is right or just with your own friends. You sit there like the virgin calling out in the street ,don’t rape me! It is illegal! That won’t work ,you need to blind your enemies and also your friends with fingers! Wake up I say ,stupid Sold-out Greek Leader-class.

Maybe you need some International Hellenophiles like me to come over there and show you how it is done ,just like they did in 1821!

Greece land, Greece air and Greece sea are filled with US/Nato military bases, thus Turkey has the right to overfly a Nato friend in Nato cooperation……………..LOL.

Greece is a country who sold out their butt to ECB, DB, IMF for a membership of EU, and must take the consequences of their choice of being an open society for everybody.

Get your facts right, we intercept every TAF flight the moment they enter Athens FIR, on the other hand we do not do so with USAF aircrafts and we do not even ask them to submit their military flights. Turkish aircrafts though are considered hostile and we request them reporting to our FIR. They do not do so hence they face armed HAF fighters before they can blink. We have shot down a couple as well.

what ?you crazy > frogs start war in libya

Turkish & Italian army engineers clean the landmines in Libya, while I can’t see any French army engineers around. Also the mass graves are now opening & UN is invited to inspect those. Macron is now bady squared. By the way US is accusing Macron who neglects the flow of Russian military hardware & mercenaries into Libya. US would never allow Putin have a base in Libya by help of a NATO “ally” France.

I’m not surprised. The Italians have always been scheming ” snakes in the grass” licking Ottoman boots. I hope your marriage lasts a life time.

Russia can use all its Allies but I dont see France in any role in Libya. The Italians always had connections there, Turkey now, Russia just took the biggest oil field. EU and UK are just fooling around. US has a bad reputation in Libya. https://www.youtube.com/watch?v=gqSzDJGFCgI

Cleaning mines so they plunder Libya’s wealth without obstruction.

The Objective
Reply to  Tommy Jensen

Yeah, only when their boy Haftar is losing the war. Hypocrites! They didn’t complain when Haftar was marching on Tripoli.

“Those two NATO allies have totally different views on what actually happened.” – one more remarkable intelligent flashlight by Jens.

Typical weak as piss France as always. Lying Simp Stoltenberg and lying Turkey. Turkey did do it ,it has form and it did the same to the Italian and Greek frigates. If anyone should be castigated it should be the Italian Commodore who ordered the Greek frigate to stand -off .

We all know those rules of engagement were written to allow nothing to be done to Turkey . The difference is Italy was so happy it could turn a blind eye as has everyone else. France should stay there ,grow balls and kick /push back at the Turks but Macron and France have probably been paid or promised oil contracts by the Turks and America.

The only country who has come out of this with honour as usual is little Greece! The smallest ,bravest and most screwed- over nation in the Nato arrangement. God hope there are Greeks to help you stupid Westerner Natoists when the time comes be sure without them you are spineless and mineygrubhing.

The only real men left in Eurooe are as always the Greeks and Serbs and that is why they are hard-done by their own Aliies and enemies like Islam and Turkey. All the rest of you are eunuchs and idiots ,in a way deserving of Al The pain jihadists will do to you within ten years. You brought the whole mess on yourselves.

Anyone know what happened to the two Turk subs? I hope they sunk with all hands down! I can’t stomach a bully…

What about Hungary? Chechnya is also a great people. Greece is filled up with US military bases everywhere, US arms, EU’s debts and loans and refugees. Nobody knows what you are talking about.

What about Hungary? It hasn’t fought against Moslems /Turks in over 100 s of years and Hungary and Orban are Erdo’s best friends NOW.

Your second paragraph? What is your point? I agree with you . It was a mistake , I said that . What does that have to do with Greece always and STILL fighting against Turkey and rapefugees when the stupid German ,British and French etc are blind ,stupid and weak?

Chechens? Why are they great ? They are apostates like Albanians so both can no longer be called Europeans because they became Salafi Moslems . You do know that right ?

Greek land & maritime borders will be Europe’s shield until the sun expires. Not even muzzie refugees come through anymore since a few months ago we thawrted an attempt by Erdogang and his ikhwan associates to challenge authority at Evros river by weaponizing muzzie illegal immigrants amd directing them against our sovereignty ( it’s self explanatory ex daesh and ex AQ had sneaked amongst them as well )

Sounds good to me. Go Hellas.

“Going to war without France is like going hunting without an accordion.” – General Norman Schwarzkopf – (Quote, when asked about France had refused to join coalition forces at 1st Gulf war in 1991)

I will give you the uptick as it was funny and true but at least Macron stood up to you for …30 seconds.