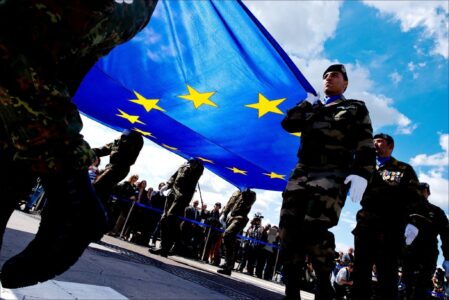 Achieving European sovereignty is a long but necessary process.

The conclusion of World War II saw new security structures emerge as the new struggle shifted to one between Capitalism and Communism in the context of the Cold War. Although France and the UK signed the Treaty of Dunkirk with a provision for Alliance and Mutual Assistance in 1947, which expanded in 1948 to include Belgium, the Netherlands and Luxembourg, it was quickly supplanted by NATO in 1949, an alliance that at the time also included the U.S., Canada, Portugal, Italy, Norway, Denmark and Iceland.

With the establishment of the Soviet-led Warsaw Pact in 1955 following the integration of West Germany into NATO, ideas for a pan-European defensive structure were completely abandoned. Discussions of a pan-European army were only revived in a serious way by French President Emmanuel Macron in 2018 following President Donald Trump’s scepticism of Atlanticism and his orders for the U.S. to withdraw from the Intermediate-Range Nuclear Forces Treaty with Russia.

Trump denounced the idea of a European army immediately upon landing in Paris in 2018 to commemorate the centennial of the armistice that ended World War I. Trump said that Macron’s proposal for an EU army was “very insulting” because its aims are not just to protect the continent against threats from Russia and China, but even from the U.S.

The now former president tweeted: “Emmanuel Macron suggests building its own army to protect Europe against the U.S., China and Russia. But it was Germany in World Wars One & Two – How did that work out for France? They were starting to learn German in Paris before the U.S. came along.”

Ultimately, it was Trump’s actions that forced a realization, at least in Paris initially, that a project for a pan-European military was needed as Washington could no longer be relied upon as a security partner. Most in Europe remained sceptical of the project, especially after Joe Biden’s victory in the 2020 election. Although Biden proclaimed “the U.S. is back” on the world stage and Macron said it was “great to have the U.S. president part of the club” as they met at the G-7 summit in June, the shock announcement of AUKUS confirmed to the French President that Trump was not just an anomaly, but that Washington has ideologically contracted itself to Anglocentricism, even at the expense of traditional partners.

However, just 13 days after the AUKUS betrayal, French and Greek officials signed an ambitious mutual defense pact. Speaking about the deal, Greek Prime Minister Kyriakos Mitsotakis said: “For the first time it is stipulated that there be military assistance in the event of a third party attacking one of the two states. And we all know who is threatening whom with a casus belli in the Mediterranean.” This was in reference to Turkey’s threats to go to war with Greece if the country declares a 12-nautical-mile sovereign maritime space around its islands, as it has a right to do per international law.

Mitsotakis also emphasized the “Euro-Atlantic dimension” of the agreement, which he said will not oppose NATO. This is what Mitsotakis termed as “European strategic autonomy.” Autonomy of course does not mean independence, but often serves as the first step towards such a goal. It is unrealistic to believe that Europe would immediately withdraw from NATO, but building such new structures supplants the necessity of the bloc and again provokes debate on the why it still exists in the 21st century with the Soviet Union long-gone and never returning.

Even with the signing of the Greek-French pact, Macron commented that “Europeans must stop being naïve. When we are under pressure from powers, which at times harden (their stance), we need to react and show that we have the power and capacity to defend ourselves.” This was seen as a message not only to Moscow and Beijing, but also to Washington, even if Macron did try to reassure that this is not a “substitution” for an alliance with the U.S.

Despite reassurances from Macron and Mitsotakis, the underlying fact remains that the deal includes a mutual defense pact against any attacking country, even if it is a fellow NATO member, thus supplanting the bloc as their respective country’s premier defense alliance. This in itself poses issues as countries like Poland and Lithuania are resistant to pan-European defensive structures and prefer to enhance U.S. interests on the continent.

The biggest challenge in establishing a European Army is not necessarily resistance from Washington as it becomes increasingly disengaged from the continent and the Near East to focus on the Indo-Pacific region, but from within Europe itself. Although Europe has discussed its own “strategic sovereignty”, as the French term it, no concrete actions have been made up until the bilateral agreement between Paris and Athens.

According to Defence World, only days after the French-Greek deal, the Defense Ministers of France and Sweden signed a letter of intent on defense cooperation. In addition, an EU leaders’ summit dedicated to European defence will be convened by European Commission President Ursula von der Leyen and Macron in the first half of 2022 when France holds the rolling presidency of the EU.

Moving Europe towards more sovereignty over its security affairs will be a long process, but one that Paris has recognized needs to move more quickly, especially after the AUKUS betrayal. It can be speculated that Paris was waiting to see if Washington’s policies towards Europe would change in the post-Trump era, however, the stark realization is that even under Biden, Europe’s importance to the U.S. has diminished. In this way, even if some in Europe are still hoping to maintain the status quo of U.S. dominance, they will soon need to conform to the new regional order or be left behind as France reshapes the continent’s security structures away from U.S. dominance.