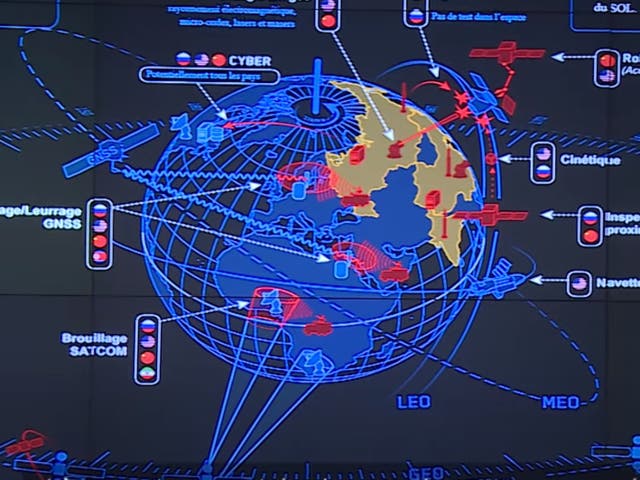 On March 8th, France launched its first military exercise in space to evaluate its ability to defend its satellites and other defense equipment from an attack.

It is “first for the French armies and even the first in Europe,” according to General Michel Friedling, commander of French Space Command. The newly-created US Space Force and the German Space Situational Awareness Centre are also participating in this exercise.

The exercises are a “stress-test of our systems,” said Michel Friedling.

The exercise, codenamed “AsterX” in memory of the first French satellite from 1965, will be based on 18 simulated events in an operations room.

The development of advanced spy satellites and secretive telecoms infrastructure has added strategic importance to space in recent years.

Space Command formed in 2019 in response to the growing trend of global powers deploying military equipment into Earth’s orbit.

“Our allies and adversaries are militarizing space… We need to act,” Defense Minister Florence Parly said at the time.

“If our satellites are threatened, we intend to blind those of our adversaries. We reserve the right and the means to be able to respond: that could imply the use of powerful lasers deployed from our satellites or from patrolling nano-satellites.”

“A series of events appear and create crisis situations or threats against our space infrastructure, but not only this,” Friedling told reporters from the Space Command headquarters in Toulouse in southwest France.

France also planned to develop anti-satellite laser weapons and to strengthen surveillance capabilities in an area that it believes could become a major theater of confrontation between powers on Earth.

This is all allegedly caused by Russia and China’s reported efforts to militarize space. So far, neither Russia nor China have held space military exercises, while those accusing them of doing so have.

In 2020, Washington accused Russia of having “conducted a non-destructive test of an anti-satellite weapon from space.”

Paris’ military drill is part of the French government’s strategy to make the country the world’s third-largest space power.

The French Space Command was created on July 13, 2019, to deal with two emerging threats. On the one hand, military and civil operations increasingly depend on space capabilities, while threats to their integrity also develop in parallel. On the other hand, France’s spatial industry and technological edge are being questioned by the recent development of the private sector ‒ the NewSpace.

The French Space Forces Command, Commandement de l’Espace (CdE) was created in 2019 and is set to have 500 personnel by 2025.

France chose to dedicate nearly €5 billion by 2025 to the development of its spatial capacities. A new operational center is being built in Toulouse, bringing together its military satellite observation center (CMOS), and the center of military surveillance of space objects (COSMOS), unique in Europe, which constantly monitors over 10,000 space objects in orbit.

France needs another French Revolution, complete with a guillotine and all.

there is no FRANCE since degaulle died !

They can be used for cheese as well.

So they finally admit to have space based weapons systems… Which is prohibited by the way… Im glad Russia and China has hunter killer wheather sats to defend against this agression.

They have never denied anything like that. Typhical rethoric of making Your deep dark state Yourself.

They even has – or partly has – their own launch staion in Guyana, Soth America having relative well missiles named Ariadne for it.

So its about You dont know how much is flying around there.

Your are broke today Jens. More so than usual. Take a nap…🤗

Facts are as I say. Ariadne has send bunches of satelites up from the smallest to the biggest ones. The others do the same and You can order how many just as You send mail.

Here even normal common sense would say they send up military satelites too.

But not for You. You write they admit things and even blame them for not telling it :(

More like no trousers on then below the belt.

Jens you wouldnt know what facts are even if they would bitchslap you :)

I noticed that India is highlighted in that picture as well. Is India now the enemy?

Haha. Indians might be an easy target, they are crowded :(

I’ve started a takedown Legend 350 build for ET contact work security. So that I’ll have something that I can carry concealed on ops in a stronger caliber than my folding Sub 2000 in .40 S&W. https://uploads.disquscdn.com/images/b0dabef33e34c5feb0818f66ccacaa773df907edbaffe1495384dfacb4c2c7d0.png

Exactly what I have been saying. US and its Allies are building military bases around our US Space Command Centre to defend the planet against hostile attacks from Aliens , terrorists and dictatorship countries who wish to do our free and civilised usury world harm! So now you listen to what I were telling you……………………………………………LOL.

Dictraitorship,you mean nwo/4th reicht/lgbtq/moral of the worse for on dictraitorship in the history of mankind,more fkn well like it,no wonder China never endorsed loser concepts? What next fake x to save the dummy do’minion supporters of democracy (NO MORE)? France is finished (period) Their ripp off other nations insomuch as their useless french submarine outdated diesel variants is another reason Australia must rid the concept,better off vying for exist collind dna swedish nuclear powered concepts which not only can deal with integration better than the french ever could achieve yet the swedes unlike the french can cope with the arctic freeze in any event for example antarctica etc,to be down to earth.

Better late than never,raaf gave the hard facts,britain has the capacity to build their own,they don’t need cia to rip off the Commonwealth,infact no one with half a brain would go on with these failed relics of scams todays,even if they could afford them?= Utter failure:

France like usa todays is vastly turning to a fascist/unlawfull/robotic/do’minion/unelected sht hole! People need make a stand against these nwo/phaedo/bankster/dullards,or else devoured eternity?

French is a 3rd rated power, only fit to play with 3rd rating India, Pak & Israel.