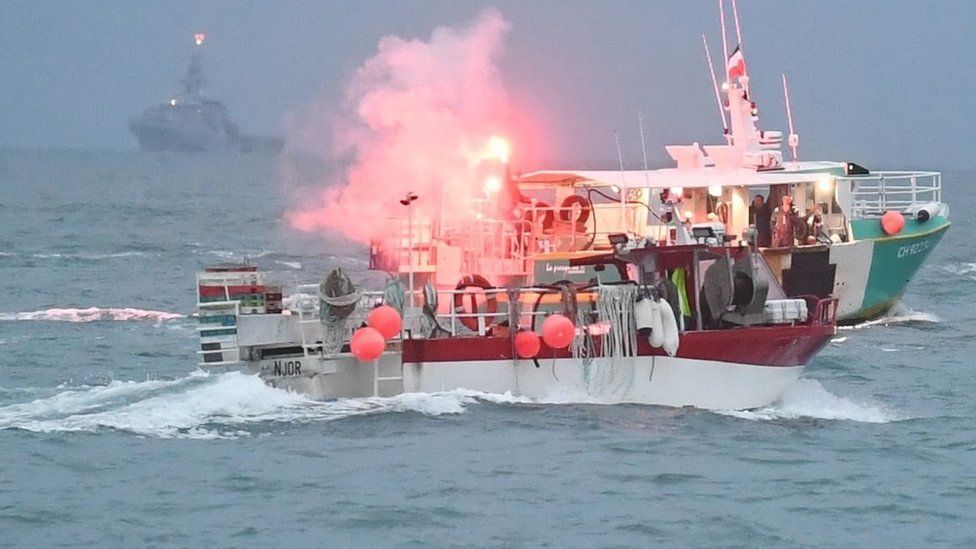 The United Kingdom sent patrol warships to the Jersey Island in the English Channel due to a fishing spat with NATO ally and former-EU compatriot France.

In return, France dispatched two maritime patrol boats to the waters off Jersey Island itself.

An official from the French presidential administration said the deployment of the French boats “speaks to our concern, and frustration, and is an appeal, which we will also express, for the correct application of agreements,” sealed when Britain left the EU, Reuters reported.

The official said the deployment of patrol vessels from both France and Britain was aimed at maintaining order and preventing clashes between trawlers on opposing sides of the row.

Following the signing of the EU–UK Trade and Cooperation Agreement (TCA) on December 30, 2020, Britain had hoped that the process of Brexit was over.

However, differences over certain “technical details” in the pact have now sparked tensions between the UK and France.

Jersey is the largest of islands in the English Channel, located between the UK and France. Although it is geographically closer to the French mainland, Jersey’s loyalties lay with the UK since the Norman Conquest a thousand years ago.

The Jersey Island is not a part of the UK, it is a “Crown Dependency” and it has very wide autonomy.

Jersey has been acknowledged as the sole power to issue fishing permits under the TCA. Licenses had not been necessary when the UK was a part of the EU and French fishermen had free access to Jersey’s waters.

French fishermen argue that the spirit of the agreement, which promises to safeguard the activities and livelihoods of European fishing communities, is not being honored.

Most recently, Jersey had issued rules which had not been specified under the trade deal.

Reacting to what is seen as ‘one-sided rules’, France’s minister for maritime affairs, Annick Girardin, on May 4 threatened to block Jersey’s electricity supply, 95% of which comes from France through three underwater cables, according to The Guardian.

“I am sorry it has come to this [but] we will do so if we have to,” Girardin had told the French Parliament.

The UK’s HMS Severn, which was deployed to shadow the UK’s Cold War-era adversary Russia, is now being used against a NATO ally as it looms near the Jersey coast.

British Senator and Jersey’s Minister of External Affairs Ian Gorst had stated that what Johnson had called as “precautionary measures” was “not an overreaction”. Dozens of French boats had gathered near the island’s St Helier port on Thursday morning, blocking a freight vessel.

Recently France’s EU affairs minister had stated that London would suffer if the British government reneged on its commitments on fishing.

Gorst had said that a blockade was “very possible” as “[the French] have done so with our sister Channel island [Guernsey] in the past, in the 90s.” But he doesn’t believe an electricity supply termination will happen as it is a commercial contract.

Islands were stolen from France long time ago, and the “English channel” is La Manche.

Nato turning against itself again!! 👌