On August 20, intense clashes broke out between former rebels in the southern Syrian governorate of Daraa, which is held by government forces.

The conflict reportedly erupted when the Military Intelligence Directorate (MID) had carried out a security operation in the town of Umm Walad in eastern Daraa on August 19. MID officers arrested Sheikh Ibrahim Turki al-Ayoub, who works with the 5th Corps, along with two other locals.

In an act of revenge, local fighters close to Sheikh al-Ayoub attacked and burned the houses of al-Lahham and Zureik on August 20. 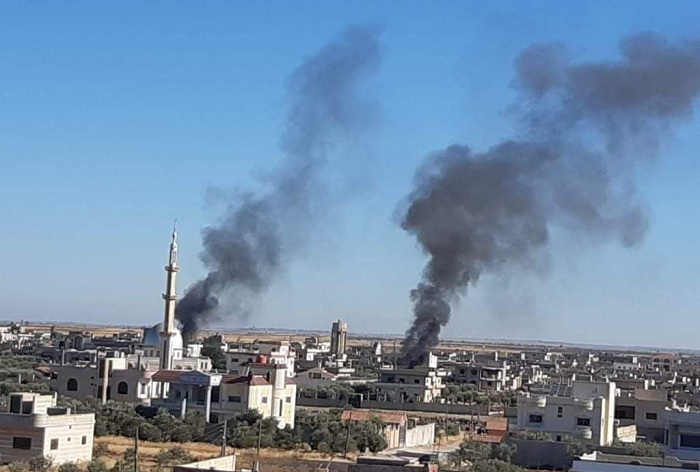 This led to intense clashes in Umm Walad. According to several sources, including the UK-based Syrian Observatory for Human Rights, a local fighter was killed and two others were injured as a result of the clashes.

The fighters working for al-Lahham and Zureik and the others supporting Sheikh al-Ayoub all joined the reconciliation process in 2018.

Umm Walad clashes are an illustrative example of the deteriorated security situation in Daraa. The rule of law is becoming weaker in the governorate. Dozens of attacks were reported there over the past few months.

Daraa is our backyard, the SAA shall have no peace there till they kick out the Iranian militias from the area. We can go on like this for another 10 years, no problem.

The SAA, and every other person in the ME, haven’t had any peace since your lot turned up.

What’s the record for the length of a Jewish homeland, before it got tore apart and sent off to Asia? 70 years must be near the longest eh!

Before there was no peace as well.

Really? Remember when the Russian Airforce was pounding terrorists along Golan Heights border back in 2017-2018 and you were too scared to even scramble any jets? They even struck isis in golan territory and no response from izrael. That will happen again if the terrorists in daraa don’t make an agreement

Nonsense. Israel supported ISIS there as almost free buffer and not as friend intil all from ISIS was gone.

Fuck off, ISIS lover. You Ziowahhabi scum need to invent some new bullshit to justify your terrorism, old one’s getting too retarded.

He is a retard and not worth acknowledging. Desperate to get any attention.

The whole Daraa operation started after Israel had said we would let the SAA reach the UN 1974 ceasefire line. Without our agreement no Russian or Syrian troop could take over that area so don’t kid yourself. Part of the deal was, the SAA takes back the land and removes the Iranians but they didn’t keep their word, so now you see escalation in Daraa and other places closer to our border. If we rearm the remaining rebels again and provide them with aircover, then the SAA would be crying to Russia about their losses. Make no mistakes, only WE decide what happens in our border area not anyone else.

Nice to confirm who is arming moderate terrorists.

We’ve stopped, but we can surely do it if the Iranians keep coming to our border.

Like there was any question… but isnt it infuriating. Having these jewish barbarians roaming around, GLOATING of their influence on other states, gloating about supporting al nusrah and friends.

Unfortunatly, these people dont understand, what goes around, comes around, and if they continue down the militarist path, they will get crushed.

haha ok good luck providing them with air cover. Russian airforce will show up again and chase you away, shoot you down if they have to :)

Let’s see anyone dare shooting down an IAF jet, just remember what happened to the SAA back in 2018 when they did it. Sicne then they learnt their lesson.

haha we’re not talking about SAA here, we’re talking RuAF. they would grill you guys.

When the West is torn to pieces by cannibals it breeds all over the world, there will be no more water for the five-pointed fish to live in, it is his destiny since he does not have the balls to fight any war without his Yankee golem, times are changing, tik tok, tik tok.

If Jesus met You, You would be turned into a fish. Hard to see You have been reading the article at all.

Seriously, calling these rapist murdering cunts “militants” is an insult. These scum should be wiped out with carpet bombing.

haahahhaha keep fighting and killing each other

So I wonder just how many SF readers really understood even the simplest things this story was telling them, probably not many, so is that their fault or someone else’s, I think it’s both their own fault and someone else’s fault, shame on you SF.

“MID officers arrested Sheikh Ibrahim Turki al-Ayoub, who works with the 5th Corps, along with two other locals.”

The 5th army corps, they’re ex members of the FSA that surrendered to Assad back in 2018 after the SAA beat them HTS and Isis to a pulp during the campaign to retake Darra and Quneitra, when the FSA realized the SAA was easily beating them they promptly switched sides to the government and helped the SAA beat HTS and Isis, Assad swiftly conscripted 25,000 of them into the SAA and sent some of them to fight in Idlib [with mixed results]. The USA used to fund the FSA pre june 2018 but Trump told them to lay down their weapons and negotiate with Assad during the Darra/Quneitra campaign, when they refused to stop fighting he ended all US support for the FSA and let the SAA and Russia give them a flogging, now the FSA is funded by Turkey and the Muslim Brotherhood.

After the Darra campaign ended Assad and Iran promptly began recruiting ex members from the FSA to join the MID, and Russia also began recruiting them to form the 4th and 5th SAA army corps, so the ex FSA fighter became soldiers and spies for Assad and Iran, and they also became soldiers for the Russian inspired elite 4th and 5th army corps [the 4th weren’t so elite though], but Russia gave them the best training and equipment so Russia was backing them 101% and had high hopes for them.

Now the Russian backed elements of the 5th army corps are fighting with the MID and no one will explain why, but it’s easy to explain so I will. The locals in Darra and Quneitra who are mostly Sunni and Druze have been very resentful of the heavy Iranian presence in their neighbourhoods, so late last year they began protesting about the Iranian presence and Iran quickly responded. Iran began cracking down on the protests but it only made things worse, earlier this year soldiers from the Iranian backed SAA 4th division [security force] and 6th division came down hard on the peaceful protests and some protesters were killed, then the Russians tried to intervene and sent in members of the 5th army corps to try and calm the situation down, sadly they were totally unsuccessful. When the 5th army corps failed to stop the protests they were told to use force to stop them which was doomed to fail, and it failed because most of the officers and soldiers from the 5th army corps were actually from Daraa and Quneitra. So they were ordered to forcibly stop their own family members, relatives and friends from protesting against Iran and were expected to follow the orders, as if, not many soldiers like the idea of having to shoot at their own family members, relatives and friends. So who actually told them to go and kill their own family members, who would be so callous, only religious zealots give orders like that, and neither Putin nor Assad are religious zealots even if they are religious. And why was the order given in the first place, especially if it was so obviously doomed to fail, it’s certainly made Russia look bad that’s for sure, defecting soldiers is never a good sign. But Iran got it’s way at least so at least there’s one big winner, at least until the protest grow to a point where even pro Iranian 4th division soldiers can’t stop them anymore, then Iran might regret being so heavy handed, maybe they’ll even regret not listening to their Russian allies.