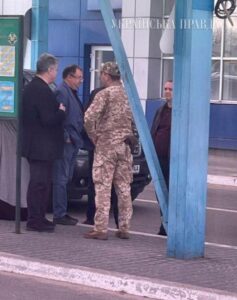 Former President of Ukraine Petro Poroshenko is trying his best to leave his war-torn country. On May 28th, he was once again refused to cross the Ukrainian border with Poland.

According to the reports of Ukrainian media with reference to law enforcement sources, Poroshenko was unable to cross the border of Ukraine with Poland for the second time. The deputy of the “European Solidarity” party Irina Gerashchenko reported that Poroshenko arrived at the checkpoint “Rava-Russian” in the Lviv region, but he was not allowed to cross the border without explaining the reasons.

When passing the passport control for the first time, Poroshenko presented a copy of order of Chairman of the Verkhovna Rada Stefanchuk on the Poroshenko’s business trip to Vilnius. He should reportedly take part in the NATO Parliamentary Assembly. However, the border guards could not establish its authenticity, since the QR code was not read.

“This time the QR code was read, the business trip is valid, [Chairman of the Verkhovna Rada Ruslan] Stefanchuk confirmed, the Parliamentary Assembly has started work. But the border guards now say that they “did not submit all the documents,” but they do not say which “not all,” she said. This is reported by Ukrainska Pravda with reference to the deputy of the Rada from the European Solidarity party Victoria Syumar.

The spring session of the NATO Parliamentary Assembly was supposed to be held in Kiev, but in March it was moved to Vilnius, where it takes place from 27 to 30 May.

In 2021, Poroshenko was charged with treason in the case of the supply of coal from the Donbass republics in 2014-2015, when he was president. He is also a suspected in the financing of terrorism and the creation of a terrorist organization. Poroshenko calls his prosecution politically motivated.

When the rats are leaving the ship you know that it is about to sink. So when one of the worst scumbags of Ukraine now is desperate to flee the country you know that the Kiev -junta are starting to panic. They now know that their time in the sun soon is over and that the Russians soon will have captured them all. And then they will be punished, severely! Poroshenko, usually referred to as “Porky, as he looks like a pig, will soon squeal like one once he is caught. So it is great news that he, that pig, hasn’t been allowed to leave the country. Much easier to catch him that way. .

I’ll never forget when he said that the children of Donetsk will spend their childhood in basements. That pig should be roasted. Scumbag.

Scum rises to the top. Next time I wash the bath out, I will think about cleaning BOTH types of scum. The type on the bath is preferable to the evil kind.

Porko pig is trying to flee before Ukraine dissolves.

Its very visible You not even know who he is.

He’s a corrupt scumbag for starters. You know, what some naive Ukrainians thought they were overthrowing in 2014 with Yanukovych but was just a facade for a fascist partnered with a US takeover of Ukraine. How’s that?

When you’ve finished digesting that, I’ll serve your second course – his war crimes against the Donbass.

Last edited 1 month ago by The Grim Reaper
27
Reply

Punishment getting fed 3 times a day

Though there is another reason: the clown want to decapitate other pretenders to the throne. Campaign in MSM has been started already, it’s matter of time when chocolaten-fuhrer will be imprisoned. That’s why the piggy Peter is running away, but can’t.

it’s not him who made a lot of videos saying that he would fight personally and never leave his country? lol

What do you do yourself?

People like him who say such things never actually mean it.

The Grim Reaper
Reply to  Erina

That was before the Zelensky/Kolomoisky tag team usurped his position as chief teat sucker at the US/EU cash cow.

Ukraine’s nothing more than a living/breathing remake of Gangs of NY with a new face for Boss Tweed every so often.

A very rich crook and a criminal.

Poroshenko is a shit anyway, so he deserves to be locked up.

9/11 was rigged and the U.S is a terrorist state
Reply to  Florian Geyer

Even in 2009 according to leaked U.S documents from wikileaks Poroshenko was called by the U.S department “our Ukrainian insider”. He also helped organize the Orange Revolution in Ukraine in 2004.

Ma, can we have porkshanks for dinner?
Reply to  9/11 was rigged and the U.S is a terrorist state

So, he ended up pretty much like the pre-convict Saakashvili, another one of ‘their insiders’, singing…… ‘nowhere to run to, baby….. nowhere to hide’.

BanderiteLivesDon'tMatter
Reply to  Ma, can we have porkshanks for dinner?

wonder what flavor tie he enjoys….

such a pernicious, toxic sheet, I would not want him near my roses, in my garden or in the compost pile.

The Grim Reaper
Reply to  thoughtful

I think he uses that last item as a filler in his shitty chocolates.

9/11 was rigged and the U.S is a terrorist state

The Grim Reaper
Reply to  Alky

Always been known as Porkshanks to me.

Didn’t Vladimir Putin offer him political asylum several months ago? I’m guessing that Poroshenko laughed it off as a joke or something.

Only the magnanimous offer help to evildoers. Putin does so, in the hope that they will learn from it. Putin is so virtuous, he should be portrayed with a HALO.

I’m not sure he would agree to that, but that makes him even more worthy. But I’m with you, he is a true Christian and deserves all the praise the world can give him. He is a righteous man and an inspiration to us all. Hopefully the whole world will soon see him as the shining light he truly is. He is without question one, if not the greatest leader of all time, especially as the times we live are the darkest since recorded history.

you mean a ghey tilted halo above Putlers head right?

On eof his problems are being too much friend with Putin. You can read about it.

Exactly. He should’ve taken the offer.

Its very impressin that the writer about it not even know why POROSHENKO cant leave the country.

Apparently ended up making it to Poland. Don’t know for sure yet.

Ma, can we have porkshanks for dinner?
Reply to  USA incompetence helps Russia

Could end up as a pallet of kielbasa. Waste not, want not.

Ma, can we have porkshanks for dinner?
Reply to  jens holm

Probably because his USDA pork inspection seal of approval’s expired.

did you mean the part about being a horrible traitor to the country he used to run on a treason charge? or the corruption investigations? or perhaps that he conspired to circumvent his own decree and buy coal cheaply from Donbass when he outlawed it and resell to the state at a higher price? or perhaps it was the chocolate factories he still owns and runs in Russia (who he calls enemy)? or perhaps its his close ties to other Ukrainian “Traitors”? If you think any other member or ex member of the rada isn’t just as compromised, sit back and watch them sell the rest of their country down the Dnieper to save their own kosher skins while sending all those around them to their doom. So terribly funny to watch the worms wriggle

He’s ORTHODOX That’s all you need to know. And in 2018 he helped found the independent Oethodoclx Church of Ukraine separating it from Russian whore bag patriarch kyril the fraud servant of Rome. So enemies in every camp for Petro

Pull the other leg too
Reply to  Anonymous

Wish someone would use ORTHO rat killer on him.

He is “orthodox bitch” as he said it to face of a real orthodox. That’s all you should know about his “christianity”, it’s enough. He is a heretic by all standards, satanist, shaytan as R.Kadyrov says about such demons in human skin.

Willy Wonka and problems at the Corpse factory. Where is Arseniy Yatsenyuk? He too was summoned along with former Secretary of the National Security and Defense Council Oleksandr Turchynov says he is in a trench in southeast donbas, and former Interior Minister Arsen Avakov? LMAO now the corrupt are getting robbed by the corrupt , and then shot as traitors I hope Russian soldiers brought deck chairs to enjoy the show.

A Coup from the Right
Reply to  BanderiteLivesDon'tMatter

Where’s Parubiy? Has he escaped to Warsaw with his Maidan snipers and planning another fascist uprising?

Ma, can we have porkshanks for dinner?
Reply to  BanderiteLivesDon'tMatter

Spiders in a jar – that’s Ukraine in a nutshell. No shortage of nuts either.

Last edited 1 month ago by Ma, can we have porkshanks for dinner?
2
Reply

Arsenyuk robbed for a billion and left to Miami where he bought many houses for making rent as MSM say. Now he is living abroad most of the time. Typical patriot of Ukraine.

Zelenskyy’s wife isn’t half bad, she can be a low-level stripper after he flee’s his country.

What was it about Junta’s did Porky not know? Ex US/nato puppets are fair game. Maybe Porky should have stuck to chocolate?

He needs to be split from crotch to eyeball and “wishboned” on a pole paraded in every major township of Ukraine!…

Until that happens to both he and Zelensky… There will be no Justice!!!

Fake News. The number of gullible people in this comment section……

Fake news? What’s fake about it?

Ma, can we have porkshanks for dinner?
Reply to  Truth Seekerq

Sheesh, how many ukiebots does it take to assemble one coherent thought?

here is the fake news from the fake country LMAO easier than taking land from a ukropt.

That man ordered AFU to Donetsk to kill its own citizens, hang that bastard

Poroshenko should have taken Putins Offer. Who knows what his fate is now.

Putin did, He knew the best way to destroy him was to act like his friend. even Medvedchuk understood his own fate and wanted poor old shenko to enjoy the same. Josephus wrote of the siege of Jerusalem by Titus how the jews of the city turned on each other like rabid animals once the second ring of defenses was breached by Rome, and ignored the danger from Romans to attack each other. Not much has changed Since the Good Emperor Vespasian’s time.

Perhaps he thought to be middleman in peace talks?

Ma, can we havet porkshanks for dinner
Reply to  Frantisek

Nothing of the sort. He was on a business trip to Warsaw to try to sell his chocolate factory in Slavyansk to some Polish nitwit before it’s too late.

If he couldn’t find a Polish nitwit, he figured he could sell it to Biden Jr. by telling him that artificial coconut filling tastes just like parmesan cheese.

Ha, this is E.Snowden, and he really can’t run to Canada or to the US, he’s still living in Russia.

This is just too perfect

A rat deserting a sinking ship.

Is the russian net closing on Nazi Government? So soon? With all the US helpful hand?