Georgia’s former Minister of State Security Igor Giorgadze released documents confirming that the US is carrying out bioweapons experiments in the so-called Lugar Center located near the Georgian capital of Tbilisi. Giorgadze launched a website “Georgia. Yesterday, Today, Tomorrow“, where documents and data are released.

“The Lugar Center”[officially known as L. Sakvareli Center for Disease and Public Health Control in Georgia] is a result of the Gerorgian-US cooperation. In 2002, the sides signed the agreement “On cooperation in the field of technologies and pathogens related to the development of biological weapons and non-proliferation of information in this field”. In 2004, the sides agreed to establish the center near Tbilisi.

Giorgadze revealed that 30 Georgians died as a result of these experiments involving Harvoni and Sovaldi pathogens in December 2015 only. The deaths of these people attributed to “unknown reasons” or simply not explained. The 27 patients died on the same day.

“What happened to them? Were they infected with something? Where were they buried? We need answers,” Giorgadze said in an interview with RT. 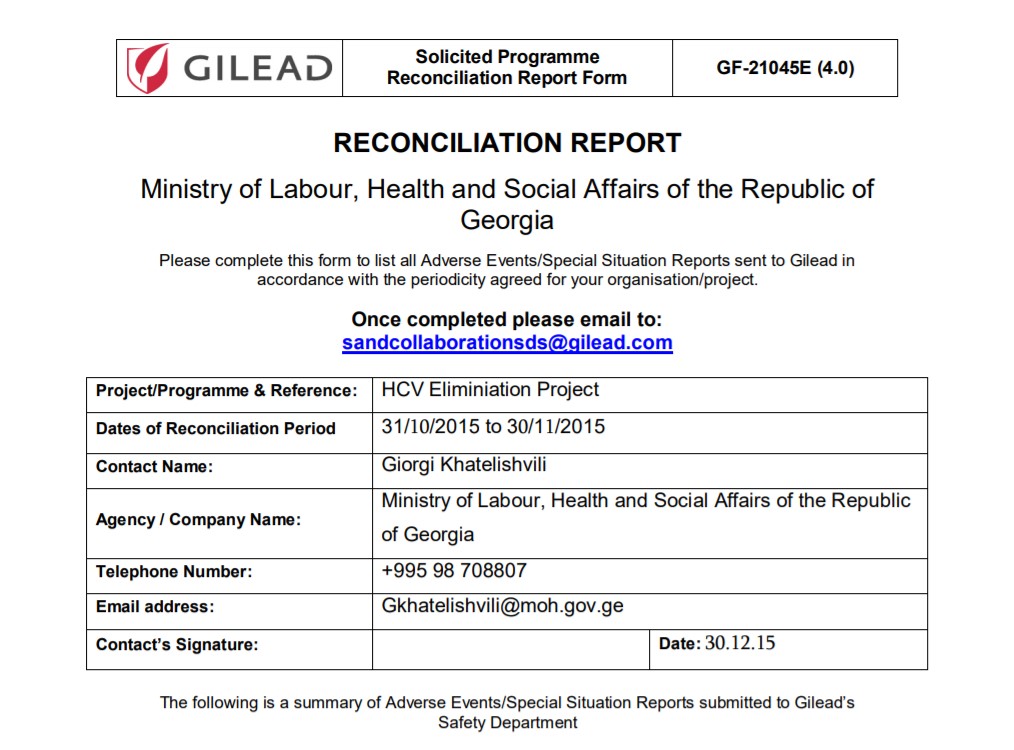 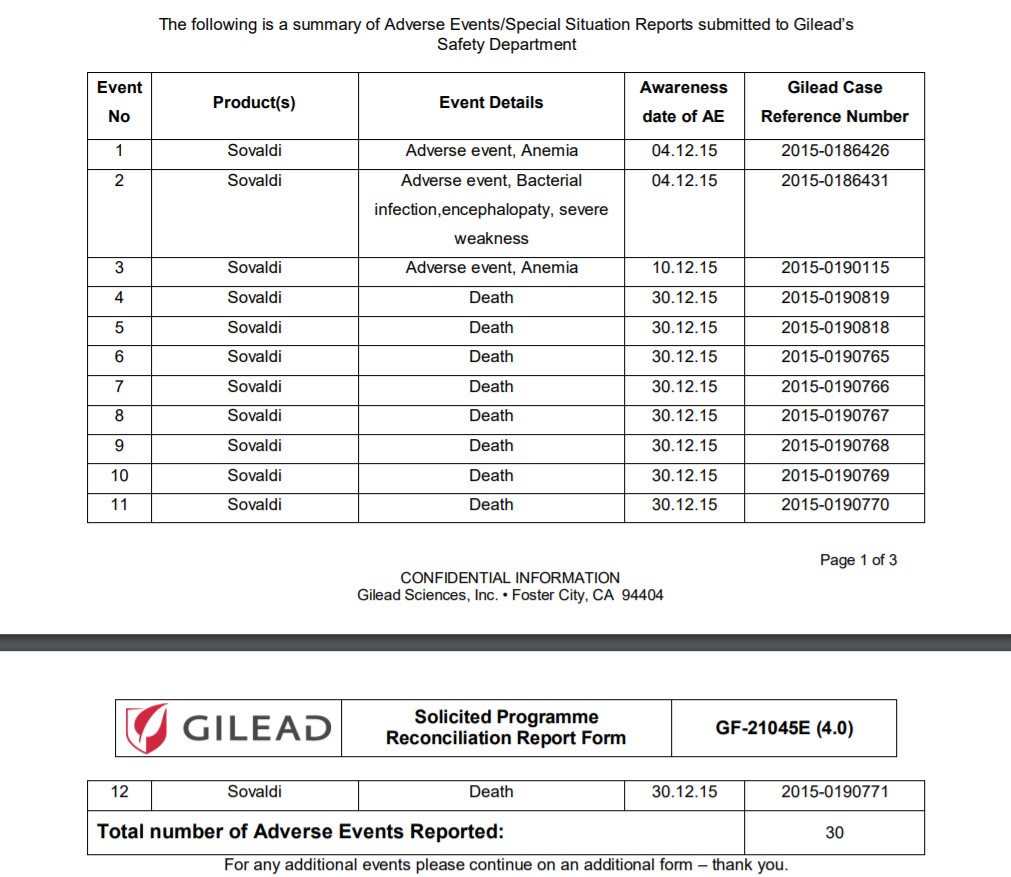 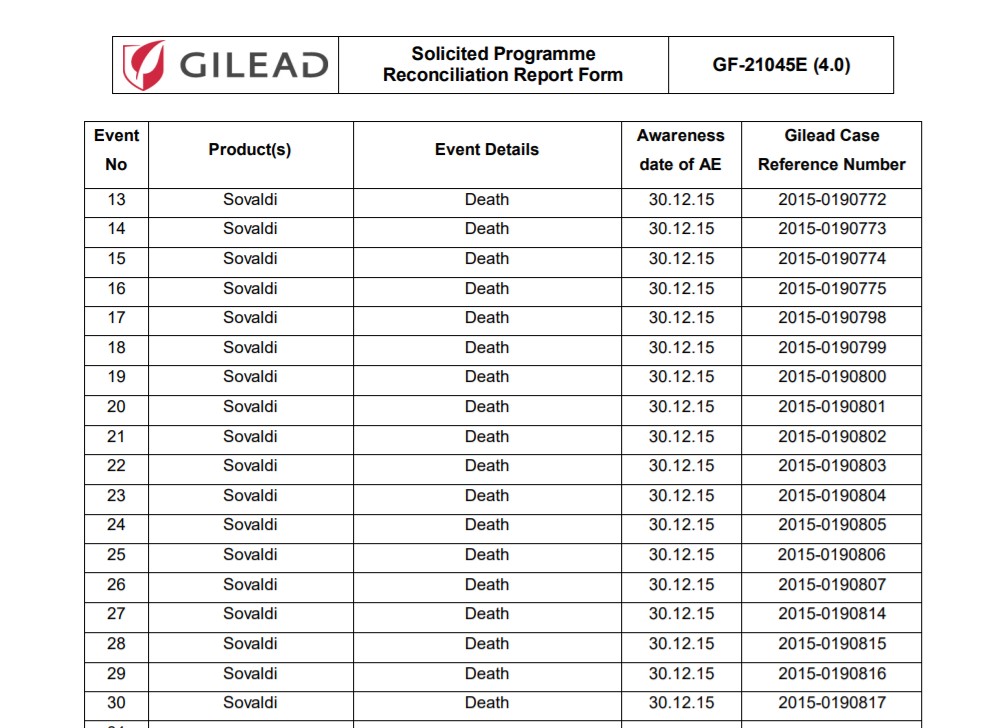 According to the former Georgian minister, the lab was “established on the territory of a … former military base some 17 kilometers from Tbilisi” as part of a US-funded project back in 2004. It “was never meant to be a medical center and had nothing in common with a hospital.” The lab was notably overseen by the US Defense Threat Reduction Agency (DTRA), a combat support agency of Pentagon which deals with weapons of mass destruction.

Giorgadze says that one of the first steps of the country’s current government was to move this center under the jurisdiction of the Georgian Health Ministry. The goal of this move was to avoid the growing public concern on the real tasks of this lab. He says that at least $300m was already spent on this project. However, the final amount remains unclear.

The data obtained by the former security minister amounts to 100,000 pages. An example of the obtained data is a US Patent for the development of a remotely controlled “device for the aerial release of mosquitoes” aimed at spreading a “toxin suitable to be transmitted by mosquito bite.”

“The present invention is capable of delivering lethal and non-lethal toxins, including any agent that can be carried and transmitted by a mosquito,” the patent description says.

Giorgadze even wrote an open letter to the US President and Congress on this issue:

An Open Letter to the U.S. President and Congress

We have received a volume of documents suggesting that the Lugar Center located around Tbilisi, Georgia, was engaged in experiments banned by the U.N. Convention of 1972 on the Prohibition of the Development, Production and Stockpiling of Bacteriological (Biological) and Toxin Weapons and on their Destruction.

To my mind, these documents need to be reviewed and evaluated by experts. I have no intentions to politicize the issue or to allege anybody. But I can neither keep secret the Center’s activity that may violate the Convention mentioned above.

Giving your friendly stance towards Georgian people, I call on you to set up an investigation into legality of experiments run by the Lugar Center’s personnel acting upon authorization of the Obama administration and under agreement with former President of Georgia, M.Saakashvili.

Neither I, nor my fellow citizens in Georgia and abroad want to see declassified papers in a few dozens of years – as we have already seen it in the recent past – which would confirm our today’s fears about biological and bacteriological experiments run on Georgians.

Georgian people will be sincerely grateful to you if you liberate our pained country, which the United Nations has put on the list of ‘Dying Nations’, from threats represented by dual-use biological and bacteriological experiments.

I hope for your understanding and support.

This illegal installation needs to be fully exposed to the world and eradicated. I am no expert in these matters but would suggest that a bomb or missile that generates massive heat would destroy the pathogens.

If it is outside of a populated area and the pathogens are heat sensitive then that does sound like a solution.

Here in Canada they built one of these “Medical/biological Research Facilities” right in the heart of downtown Winnipeg near where two major rivers intersect in the city center.

There has merely been one example that I know of where one of the scientists (madmen) took a sample of the anthrax and crossed the border to the US with it in the trunk of his car. Not to worry though. The anthrax was sent to Canada by a reliable source.

That there is one of these abominations set up in Georgia, is very sad, but it is not much of a shock.

Nothing to see here, move along.

One kind of gets used to the fact that something no intelligent, moral human being would ever do to another soon discovers that the US government is doing just that. It’s a sad state of affairs, but the result of psychopaths running the country.

I will never get used to the fact that psychopaths walk among us.

Anyone who has ever donated to the Red Cross will be mortified when the truth comes out.

Its because they are promoted by Finance to do Finance dirty profit algoritms.

Sounds like a few good thermobaric bombs will do the job

We did do bioweapons research during the Cold War, but it was dropped for being impractical in actual war. Neither Clinton, Bush, nor Obama would have ever approved something like this so excuse me while I look up the guy making these claims.

“We did do bioweapons research during the Cold War, but it was dropped for being impractical in actual war.”

Why didn’t anyone point that out in 2002 when people on the news, including govt officials were making wild accusations about Saddam doing Anthrax attacks in the U.S. and having the means to do so? :-)

A) I said impractical, the reason Arab states have repeatedly turned to unconventional weapons is another matter entirely. B) The newspaper don’t know what they’re talking about. C) Politicians have a tendency to exaggerate no matter where they’re from (it’s human nature). D) Why so smug? E) What does Saddam’s weapons have anything to do with ours?

So how come a scientist at Fort Detrick was posting anthrax to people in 2001? If you are going to make stuff up, you are going to get better at it. So how about you tell us about Israeli WMD’s?

When it comes to war crimes, it’s always the same criminals, US/UK/Israel.

How does it feel to have the disgusting EVILS of the US Borg Empire exposed for the whole world to see? The US and its slave minions are just good at spreading death and destruction.

Where did you get the Russian government’s allegations from? Oh, yes, it’s a part of your mantra.

Needs to be closed down immediately with all the other units throughout eastern Europe.

so wtf is new??? the americans have( in the USA) the biggest stockpile of illegal biological and chemical weapons stockpile in the world…..

will anything happen???? sure…..the sun will continue to rise and go down…and thats about it…

ps. the whole world knows about SALISBURY….thats where the UK has its bio/chem. program… any consequenses?? nada…

US the bigest bully on earth

This is good that people in Georgia and many other places are willing to give their lives in bioweapon experiments to reduce the threats of aggression to the United States of America.

Rather than critisize America they should be grateful for the CIA funding that pour more dollares into Georgia.