Hashim Thaci has been taken into custody.  On November 5th, he resigned from the presidency of Kosovo to face his indictment by the Hague International Criminal Court on war crimes committed during the conflict against Serbian forces.

The accusations against the former president of the Republic of Kosovo, Hashim Thaci consist of 10 counts, including “murder” and “torture,” according to the Kosovo Specialist Chambers and Specialist Prosecutor’s Office.

The former political leader of the Democratic Party of Kosovo (PDK) and two other suspects have been transferred to the detention center of the court in the Dutch city. On Friday morning in Pristina, police began raiding the homes of those accused of war crimes: Thaci, ex-speaker of the Kosovo parliament, Kadri Veseli, and former field commander and MP Recep Selimi.

“Hashim Thaci, Kadri Veseli, Recep Selimi and Yakup Krasniqi bear personal criminal responsibility “for crimes such as persecution for political and ethnic reasons, illegal arrest and detention, torture, murder and others,” the prosecution said in the document.

They are also accused in being aware of these crimes by their subordinates and not taking measures to prevent them. 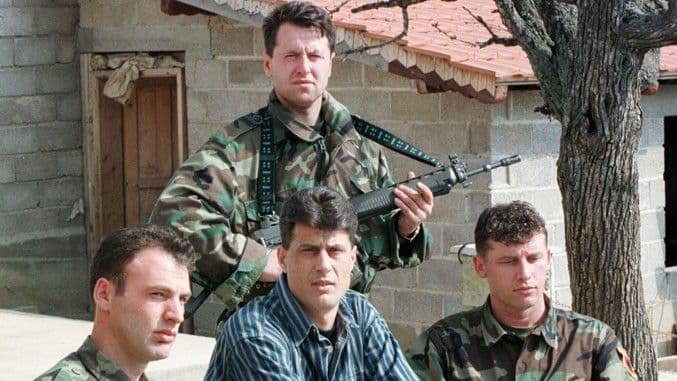 The Netherlands previously established the Special Prosecutor’s Office for Crimes in Kosovo in 1998-1999. It was done according to the report of the Special Representative of the Council of Europe, Dick Marty, dedicated to the crimes of the “Kosovo Liberation Army” (KLA). About 200 former militants of the KLA were called to testify in war crimes cases during the last two years.

Among the most serious cases are drug trafficking, kidnapping, organ trafficking.former Kosovo President Hashim Thaci taken into custody in the Hague.

This is only a thatral rappresentation , a fiction . If he were not 100% sure to be declared innocent he never let his fellow policemen catch him and he never went to the hague . Only now that the last witness has been killed and now cia gave him the permission he will go on false trial . Cia would never let an its instrument free to tell .

So this guy, recruited by the cia, plucked out of the Slovakian wh*re house he was running, and placed into a terrorist training camp – who served us and nato expansion in it’s proxy wars against Serbs.

He was dubbed “the george washington of kosovo*”.

After, nearly 25 years of service, after plundering all he could, and killing almost all witnesses, gets a trial at this ad hoc court (nato court).

He will be released due to lack of evidence, because witnesses will be killed, as has happened in all other cases.

Can’t believe! Hague takes real criminals. Putin bought them.) Or the court will say that UCK (KLA) terrorists are innocent and will release them as they did it with majority of croatian and bosnian criminals. 90% of imprisoned persons are serbs. Tell something about justice in Hague now.

It’s 20 years too late, but as long as this dirty fucker dangles from a rope (or gets a shank in the guts while in prison) I’ll be satisfied.

he probably deserves to be in den haag but better yet would be if netanyahu, world known war criminal and operating concentration camp Gaza and expediting the genocide on the palestinian people, was to find himself locked up in den haag, and not in five years time, but now. there is a lamppost waiting for him in a number of places in the world. saddam was brought to the gallows and sure as a klucking bell, if saddam met such an end, netanyahu deserves it ten times over.