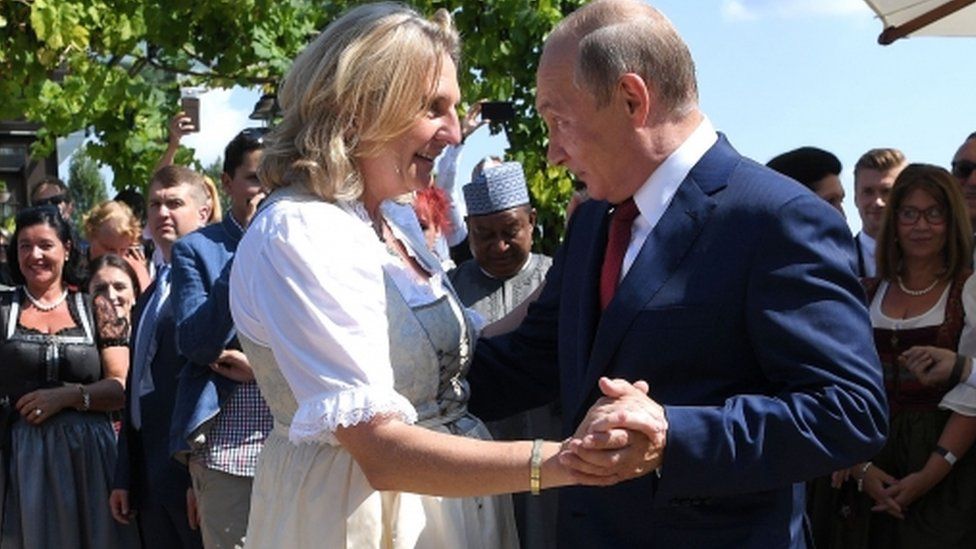 A photograph of her dancing with Putin became viral, and she got quite a bit of flack from the Austrian government for even inviting “the evil overlord” to her special event.

Kneissl, 56, left the Austrian government in 2019. She is linked to the far-right Freedom Party (FPÖ).

Kneissl has written several books on energy, geopolitics and the Middle East. Her website notes that she graduated in law and Arabic from Vienna University.

She was a diplomat in the 1990s and has written articles on the Middle East and energy for Russian state broadcaster RT and other publications.

She was picked as foreign minister by the FPÖ, which was a coalition partner in the government at the time.

Now, it would appear that she had been planning ahead. After leaving government, and being part of the anti-Russian hysteria while she was at the Foreign Ministry’s helm, the time for change has come.

Karin Kneissl has been nominated for the Russian state oil giant Rosneft’s board of directors.

Another “friend of Putin” – former German Chancellor Gerhard Schröder – heads the board.

Back in 2018, when the wedding took place, Kneissl married entrepreneur Wolfgang Meilinger, 54, at a ceremony in the small town of Gamlitz, near Austria’s border with Slovenia.

Putin arrived with a rich flower bouquet, and a troupe of Cossack singers.

The Kremlin spokesperson, Dmitry Peskov, told Russian media that he also presented the newlyweds with a painting of village life, an antique oil press and a samovar, an urn used to prepare tea in Russia.

Putin gave a speech in German and toasted the bride and groom, Peskov added.

This is yet another example that when necessary, anti-Russian hysteria can be fueled and propagated by EU officials.

At the same time, when its suitable, that course of action is abandoned, and they are more than prepared to join forces, if there is large profit to be made.

The Rosneft CEO is Igor Sechin, a man dubbed a close friend and ally of Putin.

The deputy to Gerhard Schröder on the Rosneft board is a fellow German, banker Matthias Warnig, who has long had management posts in Russian state companies.

Warnig is also CEO of Nord Stream 2, the giant pipeline consortium aiming to boost Russian gas supplies to Germany. Poland is among several EU nations opposed to the project.

A Swiss banker, Hans-Jörg Rudloff, is also on the Rosneft board, along with several top Russian executives.

russians are always loyal and supportive to their friends, which are concepts the disunited states of A never heard of.

Like Cuba, Serbia, Libya, Armenia…… In the picture above how do you tell who is who?

Sorry, how did Russia betray them? Is it Russia’s job to occupy them all to prevent US attacks?

No, just helping them fight terrorists. It was already infested with them well before Russia got involved.

Smart move. Letting Germans and Austrians have a sit at the biggest energy companies of Europe builds trust, U.S. cant spread lies if you have direct acess to daily operations.

She studied at the Hebrew University of Jerusalem and she Fulbright. The one is a ‘Cult of the all seeing eye’ institution and the other is freemasonry. So Karin Kneissl is in it: https://en.wikipedia.org/wiki/Karin_Kneissl

‘Austria’s foreign minister, who is boycotted by Israel due to her affiliation with the far-right Freedom Party, on Thursday vowed to fight against anti-Zionism and to stand up for the Jewish state in international forums.’ https://www.timesofisrael.com/austrian-fm-vows-to-stand-up-for-israel-which-is-currently-boycotting-her/

So she want’s to fight ‘Anti-Zionism’ (well thats automatically ‘Anti-Frankism’ since Frankism and Zionism, is the same difference) – that in my books makes her a Zionist herself…

SF is not Anti-Zionist,

The morons defending this move are plain idiotis at this point. How much evidence do they need ?

She is a true defender of Zionism,

CIA trolls and hasbarats will cry and rage 🤗

German Chancellor Angela Merkel had reportedly offered $1 billion to construct LNG infrastructure to import US natural gas. Nothing came of that. Poland was rumored to be preparing similar facilities. A pipeline was proposed to run from Poland’s Baltic coast and into Ukraine. That might have solved their energy problems. Nothing came of it.

Nothing will, because the US, while full of itself, is not flush and beyond with natural gas supplies, as the shale devolution has so indicated.

One could argue the quality of US natural gas, but US LNG is overpriced in dollars or any other currency. Regional de-dollarization efforts are an exclamation point.

Successful governments and honest companies, should surround themselves with worldly, educated, intelligent people who have a high level of experience and honor. That is where the West went wrong- from the start.

You mean those companies should surround themselves with Khazars,

I guess you missed the word – Honor – in my post.

Putin , the Chabad rat, does it again. I’m sure its pure Cohencidence. Here a Khazar, there a Khazar, everywhere near Putin a Khazar . ” Austrian Foreign Karin Kneissl says she is in no rush for the Israeli government to lift its boycott of her. And yet, she revels in reminiscing about having lived and worked in the Jewish state three decades ago, when she took famed philosopher Yeshayahu Leibowitz’s courses at the Hebrew University and provided simultaneous translation for then-prime minister Yitzhak Shamir. “

Putin is making the world Khazar-free,

it takes courage to waltz with an austrian…

But, but, the Ukrainians …